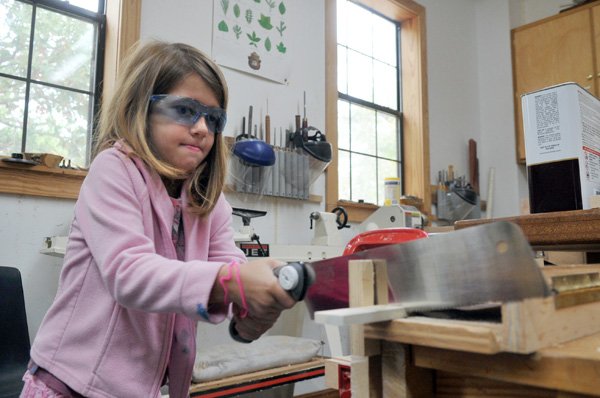 EUREKA SPRINGS — Nestled in the Ozark hills of this little resort town is a tiny private school that blends teaching elements of the old, one-room schoolhouse with modern, unconventional theories.

Young people who study at the Clear Spring School, fall enrollment 65, spend less time in the classroom than they might in a traditional school. Experiencing their academic subjects through field work and travel is the focus - not so much homework, tests and grades.

The head of the school,Phyllis Poe, acknowledges that Clear Spring’s way is not for everybody. But when it’s a good fit, Clear Spring students become curious, eager learners and thriving adults, administrators there say.

The school itself pre-dates the trend toward some other alternative forms of learning such as public charter schools and the revived popularity of home-schooling.

Rather than just read about the Lewis and Clark Trail in textbooks, Clear Spring students have brought their history studies to life by actually following the trail,Poe said.

Classes are taught in trios of three combined grades ending with 10th-12th and using a rotating curriculum.

It’s not just the answers to the questions that Clear Spring students are expected to know, but how did the question form in the first place and if there is an even better question that needs to be solved.

Doug Stowe, a Clear Spring teacher and woodworking artist, said he believes today’s corporate executives prefer workers who can creatively solve problems and work in teams over those who merely have aced standardized tests.

He also cited university trends, such as academic majors that blend subject areas or research that unites teams from biology, chemistry, engineering and physics for example.

“We live in a world of divided disciplines, but really anything you try to accomplish involves multiple disciplines,” Stowe said.

At Clear Spring, children address teachers by their first names.

“Everyone is on a firstname basis,” a brochure says. “This fosters trust of teachers by removing psychological walls that are part of the traditional authority/child model of classroom management.

“Teachers are seen as individuals who have experience to impart.”

Clear Spring School was founded in 1974 as an elementary school for first through sixth grades, starting with about 10 children, Poe said. Eventually, the school expanded to seventh and eighth grades. Nine years ago, it added ninth-12th grades.

Today, it serves pre-primary (ages 3-5) through 12th grades, with the older children serving as role models and guides for their younger counterparts.

Clear Spring had a waiting list earlier this year, Poe said, something that makes her feel fortunate.

“Nationally, a lot of independent schools closed after the economy crashed,” she said, referring to a category of private school .

Such experimental or reform-minded approaches to education have become more widely known in recent years as they’ve become more popular and more well-publicized in the news media and through documentaries such as Waiting For Superman and The Providence Effect.

Within the private, independent school category, Clear Spring is more specifically what is known as a “progressive” school, Poe said.

Myra McGovern, a spokesman for the National Association of Independent Schools, described progressive as a movement with roots dating back to the late 1800s. It theorizes that people are social beings who learn best in groups while engaging in problemsolving and critical thinking, hands-on projects and expeditionary studies, rather than rote learning that fails to achieve understanding.

Clear Spring is one of four independent schools in Arkansas that are members of the Washington, D.C.-based association, McGovern said. The others are Pulaski Academy and Episcopal Collegiate School, both in Little Rock, and Subiaco Academy in Subiaco, she said.

“Independent schools are distinct from other non-public schools in that they are guided by mission statements and are independently governed by boards of trustees,” said McGovern, the association’s public information director.

Independents are funded primarily through tuition, charitable gifts and endowment income. In addition, all member schools are 501(c)(3) nonprofits with nondiscriminatory hiring and admissions practices.

“Accreditation is a system of accountability that is ongoing, voluntary and comprehensive in scope,” she said. “It respects differences in institutional populations, missions and cultures, and fosters institutional change grounded in the judgment of practicing educators.”

For parents looking to research an independent school or to find out more about theway the association’s affiliate accrediting bodies determine the academic rigor of such schools, McGovern suggested nais.org and within that site nais.org/go/parents.

The increase in homeschooling and other alternative forms of education creates an added challenge for colleges when they evaluate student applications, said Suzanne McCray, dean of admissions and vice provost for enrollment for the University of Arkansas at Fayetteville.

Around the country, admissions officials are seeing more schools that use a grade-point average different from the traditional scale that tops out at 4.0 or that don’t test their students at all.

However, she said, colleges and universities have adapted.

“What has happened, this proliferation of choices for parents, presents us with a problem for admissions,” Mc-Cray said. “One of the reasons we’re addicted to ACT and SAT scores is because it’s a good way to determine academic rigor.”

Because higher education institutions have learned to look past all these filters, they’ve also become good at evaluating the whole person when the standard criteria is not there.

“We certainly would cope, and we would try not to penalize that student in any way,” said McCray, adding that teacher essays on student performance have at times proven “much more telling than an A or B grade.”

McCray said good students can come from all sorts of schools. She cautions parents to do their homework and ensure that a school they consider is strong in core subjects such as math.

“We have a lot of kids who are home-schooled who come here and do very well,” she said. “I think any program that encourages curiosity and work ethic - and by default creativity, too - they’re probably going to do just fine as a student.” Patrick Wolf, an education professor who is UA’s 21st Century chair in school choice, has found in his research nationally that the student body is an important factor in a school’ssuccess, whether public or private.

“The schools, they have an easier time if they’re dealing with an advantaged population,” he said. “In my studies, I’ve found that the private schools tend to have a slight advantage in terms of academic rigor.”

Wolf has also found links between higher civic values (such as voluntarism and political participation) and schools of choice - private or public - as compared with assigned public schools.

He described schools that combine school grades as“new-age-ish,” saying this illustrates one way of developing a distinctive identity and approach.

“And, if enough parents are interested in that form of education, then the school will thrive,” Wolf said.

WISDOM OF THE HANDS

Jo Vaught, a parent who moved from the Kansas City area to Eureka Springs to enroll her high school age son in Clear Spring, is among the parents who volunteer, doing everything from playground duty to answering the headmaster’s phone.

“It’s not a school for everyone, but for those it works for, it’s life-changing,” Vaught said. “The difference it makes in kids’ lives is just wonderful.”

Another parent, Karen Fitz-Patrick, works as the school’s music teacher and as Poe’s assistant. She began 12 years ago as a substitute teacher at Clear Spring before she had sons Noah, 10, a fifth-grader,and Chance, 3, a pre-primary pupil.

Observing Stowe’s “Wisdom of the Hands” class on a fall day brought back memories for FitzPatrick.

“Noah, he made a train in here,” she said, referring to a project a couple years earlier involving six boxcars, including an engine and caboose. “They were studying trains in school.”

Children of all ages take the woodcarving class along with their other studies. They’ll make an abacus for arithmetic or a wooden elements table for chemistry class.

During the visit by FitzPatrick and Poe, first- and secondgraders were making a special “math facts” box to hold handmade flash cards.

“I sanded all mine,” one little girl, Alena Guillory, said with satisfaction from behind her blue safety glasses.

During another stop by the group, FitzPatrick took a peek at son Chance’s group.

The teacher, Charla Destry, was helping the children, ages 3-6, paint gourds for a harvest party on the deck behind the classroom.

“We’re doing a sound of the week,” Destry said pointing to a colorful tile with the letter “G.” “Right now we’re on ‘guh.’”

Stowe, the woodcarving instructor, said his class is intended to help children develop spatial skills, “which is essential for the ability to do math,” and the focus is on the materials, not the tools that shape them.

In the same vein, he sees alternative education as a better way to shape character and instill persistence, teamwork and problem-solving skills, something students are less likely to get if their school is teaching-to-the-test and failing to tap their inner curiosity.