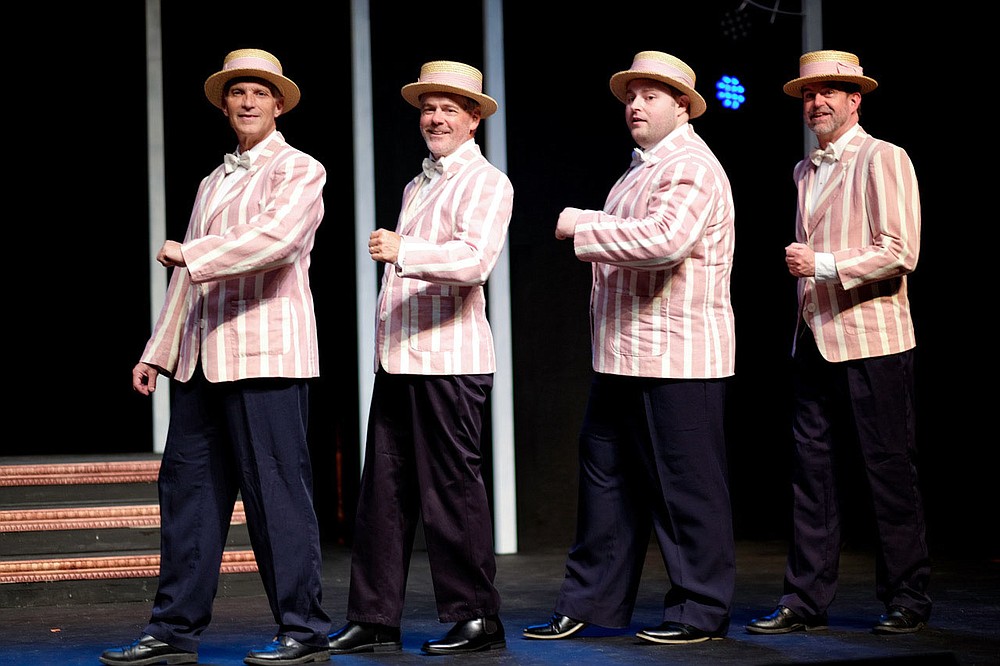 Just a few weeks ago, Edward Mountz was belting out ’80s rock ‘n’ roll tunes as the romantic lead in “Disaster,” and Kevin Lancaster was the awkward professor trying to stop an earthquake, followed by a tidal wave, followed by a blazing inferno.

“This is my first time singing in a barbershop quartet,” Lancaster says. “It has been a fun and rewarding challenge.

“Singing in the quartet is much more challenging musically than the other musicals,” he adds. “The harmonies are tighter and more complex, and there is no accompaniment to help keep us on track.”

“I’ve sung in four-part harmonies in ensembles before, but I’ve always had someone else also singing my part — which definitely helped,” agrees Mountz. “So this was a little bit of a learning curve for me, but once the individual parts started to sink in, things started to click.

“Back in ‘Avenue Q,’ I maneuvered the right arm for Nicky, so I had to be totally in sync with his left arm and voice, Cody Robinson,” he adds. “It was an amazing and fun experience, and now I get to somewhat relive it, but with three people instead of one!”

Miller says he learned four-part harmony from the United Methodist hymnal in grade school, so the singing has been the most fun about his APT debut.

“But it’s also fun to feel the momentum build in the rehearsals now that we’re getting to the full show runs,” he adds. “It’s been a long time since I was on stage, and I’m enjoying the energy of the APT veteran actors.”

“Singing barbershop harmonies … should seem easy and effortless, but is very technically precise and requires each member to sing exactly what is written,” Jones says. “Trust in the other members of the quartet is what makes a great barbershop experience.”