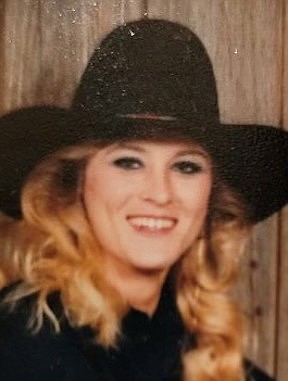 Donna Renee Terry, age 59, passed away in Tahlequah, Oklahoma, on October 16, 2021. She was born in Siloam Springs, Arkansas, on February 26, 1962, to Juan and Virginia (Morris) Barnes. She married Jack Shelley at the age of 16 and later divorced. In her late 20's she joined the P.W.R.A. and began riding bulls in both women's rodeos and in men's rodeos that featured women's bull riding. She loved the thrill of it as well as getting to travel with her competitors who became great friends. Her sister, Anita, also rode bulls and they were a star attraction at Longhorn rodeos. She competed in cities like Des Moines, Chicago, and Toledo. She later started riding broncs as well and was paid to ride exhibition in Mexico where she was admired for her smile and her long blonde hair.
She is proceeded in death by her mother, Virginia Phillips, stepfather, Bill Phillips and brother, Robert Alberty. She is survived by her father, Juan and his wife Sandy Barnes of Flint Creek, Oklahoma; son, Casey and wife Brynn Shelley of Kansas, Oklahoma; brother, Lance and wife Danielle Phillips of Edmond, Okla.; sisters, Anita and husband Jeff Smuck of Winterset, Iowa, Robin and husband David Wofford of Watts, Oklahoma, Kimberly Alberty of Siloam Springs, Arkansas, and one grandchild, Briley Shelley.
Memorial services will be held at Wasson funeral Home in Siloam Springs, Arkansas, on Saturday, October 23, 2021, at 10 a.m. To sign our online guest book, please visit: www.wassonfuneralhome.com.