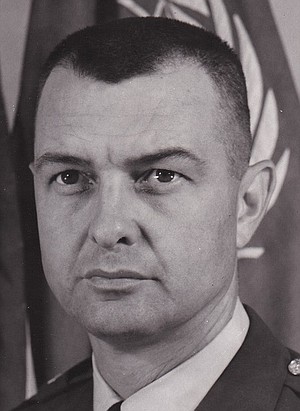 Ray Loren Spence, Colonel, USA (Ret.) 88, died at Washington Regional Medical Center in Fayetteville, Ark., on May 1, 2021. The immediate cause of death was pneumonia, though broadly, it can be said Spence died from and after a long and well-lived life. He was born November 10, 1932, in Paragould, Ark.
Spence was a soldier, having served in the United States Army for more than 26 years following two years in the Arkansas National Guard. He served in Germany, Korea, and Vietnam, and at installations around the country including the Pentagon for a period he referred to as his "humility tour." He commanded two battalions at Fort Sill, Okla., the 5th Missile Training Battalion and the 9th Provisional Training Battalion. He also briefly commanded an artillery battalion in Vietnam, which he thought to be his most fulfilling experience as a soldier. He had a command of some type at every rank. He served for two years as the Inspector General at Fort Sill, and his final assignment was four years as the Post Commander of Fort Chaffee, Ark.
Though they returned to Fort Smith in 1995, Spence and his wife retired to Jonesboro in 1983 to be closer to their aging parents. In retirement, Spence announced a desire to catch every fish in northeast Arkansas. He stated later that "he didn't succeed, but it wasn't for lack of trying." Spence was an avid golfer, sometimes playing 36 or even 45 holes in a day during his retirement, and he got his hole-in-one on October 31, 1987. Though his friends likely would never have characterized him this way, Spence had an artistic streak. He expressed this through woodwork, having built much of the furniture in his home; through storytelling and writing, having written seven large binders of stories about his life; and through music, by playing the ukulele, the harmonica, and beginning at the age of 82, the guitar. Spence was a fine baseball player and went to camp in the St. Louis Cardinals minor league system in the spring of 1952. He later played in the industrial leagues in and around Wichita, Kan., and for Arkansas State, then known as Arkansas State Teachers College, where for many years he held the season batting average record. He remained a lifelong fan of the Cardinals and was also a fan of the Dallas Cowboys; the Arkansas State Indians, and later Red Wolves; and the Razorbacks.
Spence was a lifelong Methodist, though he was sometimes at odds with some of the social positions of the church.
In 2017, Spence was preceded in death by his wife of more than 65 years, Alfreda Spence (formerly Lockwood). Spence and his wife knew each other from a young age as they were born about two months apart in small Paragould and went to school and church together during their youth. In describing the length of his relationship with his wife, Spence stated that he had "no memory of a time before he knew her." Noting that their parents were friends, he used to like to say that when as an infant his mother had brought him to the Lockwoods for a visit, his future wife "had kicked the slats out of the crib trying to get to him."
Spence was also preceded in death by two daughters, Virginia Lorene Spence, who died as an infant, and Patricia Darlene Spence, his Down Syndrome daughter, who for her entire life lived with Spence and his wife, before her death in 2011. He is also preceded by his parents, Ray and Mabel Spence, formerly of Jonesboro, Arkansas, and his brother, John Huston Spence, formerly of Oak Ridge, Tenn.
Spence is survived by his daughter and son-in-law, Pamela and Richard Cowan, and his grandchildren, Jennifer Cowan and Jeffery Cowan, all of Fort Smith, and his son and daughter-in-law, George and Linda Spence, of Bentonville, Ark.
The family wishes to say a special thanks to John Karrant, Bob Boyle, JW Holmes, and Paul Humphrees, all friends of Dad's who stayed in contact with him and continued to take him to lunch from time to time, even as his increasing limitations made doing so more difficult. There are many others who kept in contact with him by phone from time to time and we express thanks to them as well. Special thanks for their caring attention is also due to the staff of Brookfield Assisted Living in Fort Smith and the Arkansas Veterans Home at Fayetteville.
Spence had a congenital eye disease, retinitis pigmentosa, which caused progressive night blindness and tunnel vision as he aged. He considered himself fortunate to have not suffered the worst of the affliction until late in life, after he had provided for his family and was able to assist his wife in caring for their special needs daughter prior to her death. In the end, his sight was almost gone. The family believes that immediately after his death, Spence awoke in Heaven, his vision now clear and full to see his wife, daughters, other family, and the Lord welcoming him home.
Visitation will be at 5 p.m. to 7 p.m. Thursday at Edwards Funeral Home in Fort Smith, Ark. Funeral will be at Edwards Funeral Home Chapel at 10 a.m. Friday. Immediately thereafter, Spence will be interred with his wife and daughter, Patty, at the Fort Smith National Cemetery, with appropriate military honors. In lieu of flowers, the family asks that memorials be made to Abilities Unlimited, 3305 Kibler Road, Van Buren, Ark. 72956 or the Foundation Fighting Blindness, 7168 Columbia Gateway Drive, Suite 100, Columbia, Md. 21046. To view the online guestbook, please go to www.edwardsfuneralhome.com