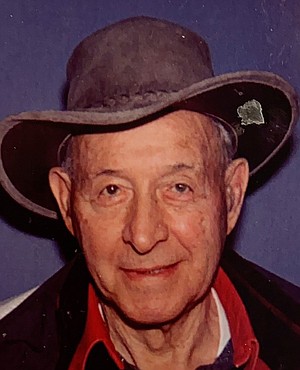 Max E. Jackson, age 99, died Sunday morning, January 24, 2021, in his home in Springdale, Ark. He was born in Tabor, Iowa, on February 11, 1921, to Ralph and Leta Penney Jackson. On November 27, 1942, he married Wilma Miller. Wilma and only daughter, Judith Ann Jackson Hudson, preceded him in death. He leaves behind his three sons and their wives, Jerry and Cathy Jackson of Fla., Steve and Martha Jackson of Ga., and Randall and Jane Jackson of W.Va,; son-in-law, Larry Hudson and his wife Dee of Idaho Falls, Idaho; grandchildren, Julie and Gary Darnell of Fayetteville, Ark., Mark Hudson of Idaho Falls, Idaho, and additional grandchildren: Cristy Trout and husband Dan, Monica Burke and husband Richard, Robin Miklausich and husband Kevin, Amy Heineman and husband Max, Amanda Rintala and husband Anthony, Adam Jackson and wife Cait, Alan Jackson and wife Annie, Tim Jackson and wife Amy, Jeff Jackson and wife Rachel; great grandchildren: Corey and wife Dianna, Anne Elise and husband Joe, Henry, Tim,Emma, Max, Sophie, Vann, Josephine, Frankie, Chase, Caroline, Britt, Jackson, Reese, and great-great-grandchild: Aliyah,and his two sisters, Doris Wiley of Calif., and Wava Lou Bowley, of Iowa.
In 1942, Max graduated from Peru State Teachers College in Nebraska with a degree in chemistry. DuPont Chemical hired him as a chemist at an Oklahoma munitions plant for his first job out of college. He was suspended from his job for a week after accidentally bringing in a .22 rifle cartridge in his jacket pocket (left over from a hunting trip the prior weekend). His plant manager knew he was engaged to be married and after reviewing his personnel file suggested he take the week's suspension to get married. He promptly took advantage of the opportunity and in November 1942, married Wilma, his college sweetheart. They celebrated 77 years of marriage together! Max considered this first interaction with his plant manager the luckiest break in his career!
Shortly after he was married, the plant manager recommended him for a position with the newly organized Manhattan Project war effort at the University of Chicago, where he was part of the team of scientists who engineered the first controlled, self-sustaining nuclear chain reaction in December 1942, at Stagg Field. He took great pride in his work that helped usher in the nuclear age. He served 39 years in various management positions in the nation's atomic energy program at the University of Chicago, the Hanford Works in Washington state, the Atomic Energy Commission in Oak Ridge, Tenn., at Argonne National Laboratory in Chicago and at the Idaho Falls Engineering Test Site.
In 1968, when their daughter Judy died in a tragic accident, her two small children, Julie and Mark, moved into Max and Wilma's home, along with their father, Larry. Judy and Larry's children lived with them off and on as they were growing up. Max and Wilma often humbly remarked that the task of helping Larry raise their grandchildren only served to keep them young at heart a little longer. Max retired in 1981 from the Department of Energy as Manager of the Energy Research and Engineering Division in Chicago. After his retirement, Max and Wilma moved to Shell Knob, Mo., where he designed and built a lakeside passive solar home. He continued his lifelong interest in antique woodworking tools, gardening, and gourd culture and crafting. He will always be remembered for the encouragement and strong support he gave his family and friends and support to his church. Max and Wilma enjoyed residing in Springfield, Mo., from 1993 to 2006 where they were members of Campbell United Methodist Church. From Springfield, they moved to Elkins, Ark., to be near granddaughter Julie, her husband Gary and their two children, Anne Elise and Henry. They became active members of Sequoyah UMC in Fayetteville, Ark.
Church members felt fortunate when Max joined their discussion groups and describe him as a true biblical scholar, a great thinker and philosopher of religion. In 2017, Max and Wilma moved to the Gardens at Arkanshire in Springdale, Ark., where they continued to make new friends. During the last 11 months of Max's life, he was almost completely restricted to his apartment due to the global pandemic. Even with very limited vision and hearing and without his beloved Wilma, he never stopped smiling and chuckling! He received much loving care from the home health group NAPS and also the Arkanshire staff during this time. Max derived great joy from the family members who could visit and the phone calls each and every day from all three sons, his son-in-law Larry, and grandson Mark. Each conversation included "it's good to hear your voice" ...and would end with his words: "I love you; take ‘er easy". We all love you too, so very much, and we will surely try our best to do so. To place an online tribute, visit: www.bernafuneralhomes.com.