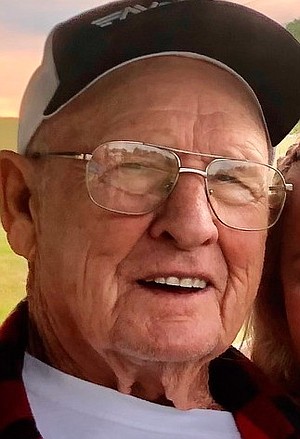 Ronald Kentley Webb, 84, passed away suddenly on December 2, 2021 at his home in Pea Ridge, Ark., just as he hoped. He was a healthy and sharp 84 year old gentleman, other than a recent pulmonary issue, but that didn't stop him from connecting with family, friends, taking care of his cattle, his dog Ellie, and his farm, even up until the day of his passing.
Despite a huge snow storm that prohibited the doctor from arriving on time, Kent entered this world on January 24, 1937 in a farmhouse in Pea Ridge that still stands to this day. He grew up on Big Sugar Creek, fishing and hunting up and down the creek for miles. He was business savvy at a young age and sold soda pop down at Red Bank to the crowds swimming each Sunday after church. He was the youngest of seven children and loved to share stories of good times and hard times while growing up on the family farm. He attended school in Pea Ridge, enjoyed basketball as a teenager, and graduated high school in 1955.
Kent proudly served in the United States Army and was stationed in Korea from 1960 to 1962, with a rank of SP4.
In the late 1950s, he met Mary Margaret Russell, who became his wife on July 28, 1962, shortly after his trip back from Korea. After five years of marriage, they had their first daughter, Lisa, moved to the farm in Pea Ridge, and built their own house. A few years later, they had their second daughter, Cassie. Kent spent countless hours with his wife and girls, swimming in the creek during the summers, in gyms watching his daughters play basketball, on Beaver Lake fishing and camping, and doing other family things. Kent also enjoyed hunting and killed his best trophy deer in Colorado in the late 1960's. He also enjoyed his two-acre garden, cutting and putting up hay, taking care of his cattle, watching the deer graze at the farm, and spying the bald eagles flying over Big Sugar. He always had a trusty Yellow Labrador Retriever by his side. Kent was a member of Twelve Corners Baptist Church and served as a deacon to the church. He and Mary Margaret helped with many Vacation Bible Schools at Twelve Corners when their girls were little. Kent would put old-timey cattle racks on his truck and pile kids in the back that wanted to attend VBS. Kent served on the Pea Ridge School Board for two terms while his daughters attended school there. Serving his community was always very important to him. Kent helped with his wife's non-profit, The Granny's Quilts of Love, and hauled material, thread, and quilts all over Benton County and down to the Arkansas Children's Hospital in Little Rock when the quilts would be donated to the hospital. Kent spent 33 years employed by Southwestern Bell Telephone Company. He started as a lineman and worked his way up to the NWA Engineering Department. In 1990, he opted for an early retirement from the telephone company so that he could continue raising beef cattle full time and spend more time with his family. In 1999, Kent's world changed in an amazing way with the addition of his first granddaughter, Lindsey. Then, came two wonderful grandsons, Reece and Dawson. Kent was crazy about them all and spent time investing in their lives. There were many fishing trips to the creek, many four-wheeler and Ranger rides, many snacks prepared, and lots and lots of stories shared about life on the farm. As his grandchildren got older, he spent more time on bleachers watching them play baseball, basketball, football and softball. The morning of his passing, he spent time asking about and bragging on all three of them! Kent never hesitated to reach out and help others in any way he could. He had a sharp sense of humor and was very clever. He was well versed in issues across our country today and if asked about his political views, he would certainly try to persuade anyone to agree with his opinions. Being a kind, dependable, loving husband, father, grandfather, and neighbor was extremely important to Kent. He will be missed by all!
Kent is survived by his daughter, Lisa Crowder and her husband Todd, their three children Lindsey, Reece and Dawson; and Kent's sister, Irene Bell, all of Bentonville. He was preceded in passing by his wife, Mary Margaret Webb; and his daughter, Cassie Webb; his parents, Edward and Myrtle Webb; three sisters: Lois Mathew, Doris Searcy, and Joann Miller; and two brothers, Lyle Webb and Harold Webb.
The funeral service will be held at the First Baptist Church of Pea Ridge at 2 p.m. Monday, December 6, 2021. There will be visitation at the same location beginning at 1 p.m. before the service. His family will be present to welcome loved ones. Instead of flowers, please consider making a memorial donation in Kent Webb's memory to Arkansas Children's Hospital directed towards "The Granny's Quilts of Love Endowment".
Online condolences may be made at siscofuneralhome.net.