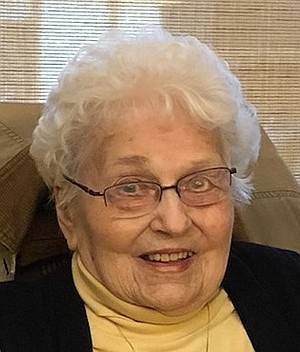 Mary P. DeWitt, age 97, of Fayetteville, Ark., passed away peacefully the morning of 25 July, 2021. Mary was born February 14, 1924, in Yonkers, N.Y. She was the oldest daughter of Andrew Pivarnik (sometimes spelled Pivovarnik) and his wife, Elizabeth (maiden name Hvisc). Both were hard-working first-generation Slovaks. Mary had two sisters, Helen and Irene (half-sister); both deceased.
Mary grew up primarily in Bridgeport, Conn., and was an excellent student in high school. She worked in the Northeast and met her husband, Herschel Nelson, there. They were married and started a family in Philadelphia, Penn. They later moved to Ferguson, Mo., in 1953. Three boys resulted from this marriage (she sometimes mentioned this was quite a contrast to growing up in an all-girls family). Mary was determined to get back into the workforce in the 1960s. She began as an office worker at Derby Oil Company (in St. Louis) and ended her career as an executive secretary at Emerson Electric Company. She was widowed in 1970, and married Vernon R. DeWitt in 1974. Vernon had two daughters, Jodi and Crystal, from a previous marriage. She was widowed again in 1993. Mary had a strong personality and persevered through difficult times as a single working mother. She had keen insight, was extremely observant and shared her opinions, as necessary (which generally benefited her boys, although sometimes they didn't know it). She maintained these traits through to her passing. She cared about her family emotionally and fiscally. She had many good years in independent and assisted living at Butterfield Trail Village and appreciated all her caretakers.
She is survived by her sons, James Nelson, Eureka Springs, Ark., (spouse, Susan Nelson), William Nelson, Suwanee, Ga., (spouse Kathy Nelson), and Richard Nelson, Ardmore, Okla., (spouse Carol Enkoji). Grandchildren are Mary Elizabeth Grace (Meg) Wood, Atlanta, Ga., Katherine Petrina, Roswell, Ga., Laura Plummer, McKinney, Texas, and Jacob Nelson, Suwanee, Ga. Great-grandchildren are Brandon Wood, Logen Wood, Richmond Petrina, and Sutton Petrina.
Following cremation, Mary will be buried with her former husbands in St. Louis, Mo., in a private ceremony.
In lieu of flowers, please consider donations to St. Jude Children's Research Hospital (www.stjude.org/joinus), National Wildlife Federation (www.support.nwf.org), or Arkansas PBS (www.myarkansaspbsfoundation.org/donate), and keep her in your thoughts. If you have questions about this notice, please contact Westfield Chapel, Springdale, Ark. She is greatly missed already and may she rest in peace.
Online condolences: www.WestfieldChapel.com.