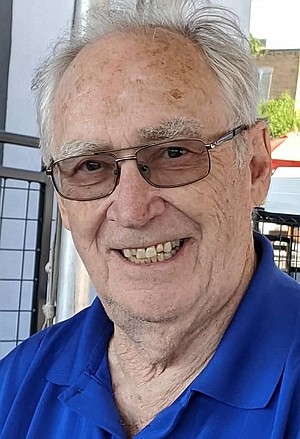 Thomas "Tom" George Murray Sr., 83, of Bella Vista, Ark., passed away March 30, 2021, at Mercy Medical Center in Rogers following complications of a stroke.
Tom was born May 9, 1937, in Duluth, Minn., to George and Clara Murray. He attended Catholic schools in Duluth, and after graduation from Cathedral High School, Tom attended St. John's University in St. Joseph, Minn., graduating with a degree in English in 1959. He married Marlene Marsh on January 30, 1960. Tom worked first as a broadcast journalist at radio and television stations in Marshall, Minn.; Omaha, Neb.; Duluth; and Minneapolis. He then became the communications director for Control Data Institute in Minneapolis. In later years, Tom was a professional fundraiser for various pro-life nonprofit organizations. Tom and Marlene moved to Bella Vista in 2003, primarily so Tom could satisfy his love of golf. In addition to playing golf, Tom enjoyed reading, playing bridge, writing his memoirs, and spending time with his large family. He was a devoted member of St. Bernard of Clairvaux Catholic Church in Bella Vista, where he was involved in the Adoration program, as a lector, and in other church activities.
Tom was preceded in death by his parents, and a sister, Anne Kuyava.
Survivors include his loving wife of 61 years; children, Tom Jr. (Hope) of Maple Grove, Minn., Christopher (Susie) of Bloomington, Minn., Daniel (Mary) of St. Louis Park, Minn., Michelle (Anthony) Full of Broomfield, Colo., Stephen (Andra Suchy) of Minneapolis, Patrick (Reina) of McLean, Va., and Sean (Jill) of Hopkins, Minn.; 11 grandchildren; two great-grandchildren; siblings, Michael (Mary) of Duluth, Margaret "Muggs" (John) of Northfield, Minn., and Patrick (Mary Beth) of Coon Rapids, Minn; brother-in-law Gene Kuyava of Duluth; and many close cousins, nieces, nephews, and friends.
A Mass of resurrection will be held at 10 a.m. Monday, April 5th, at St. Bernard's, preceded by a rosary at 9:30 a.m., with interment of cremains in the church columbarium following Mass.
In lieu of flowers, donations may be made to St. Bernard of Clairvaux Catholic Church in Bella Vista. A livestream of the service will be shown on the church website at bvstbernard.org.
Arrangements are by Bella Vista Funeral Home and Crematory. Online condolences can be made at www.funeralmation.com.