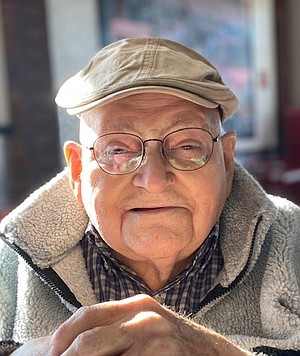 Donald K. Marts, 91, of Springdale died Oct. 16, 2020, after a short illness. Born October 21, 1928, at Cimmaron, Kan., son of Tom (Thomas Harold) and Juanita (Juanita Ethel Deck) Marts of Ozark, Ark. He graduated from Watonga Oklahoma High School, then studied at The College of the Ozarks at Clarksville, Ark., for two years. While at C of O he worked part time at a weekly newspaper, The Herald-Democrat. Following two years of service in the Army during the Korean War, he returned to Clarksville in 1953 and began a full-time position at the H-D. Don and Bill Hunt, another H-D employee, bought the newspaper in 1955 and operated it until 1974 when they sold it. He met and married Grace Sallis in June 1954. She passed away in February 1955. The had no children. Don met Patricia Louise Guthary, a teacher in the Clarksville public schools. They were married in July 1958. Sons Andy and Kent completed the family. The family relocated to Springdale and he worked at Phillips Litho from 1974 to 1979. He then began working at First National Bank of Springdale, retiring in late 1993 as security officer and facilities and equipment manager. A Presbyterian for 60 years, Don served the Springdale church as Clerk of Session for over 20 years, and in many other capacities. He was a fixture in the choir.

Survivors include two sons, Andy T. Marts (and Tammy) of Mountain Home, Ark., Kent M. Marts (and Natalie) of Bentonville, Ark., and a brother, Larry L. Marts of Altus, along with six grandchildren and four great-grandchildren.