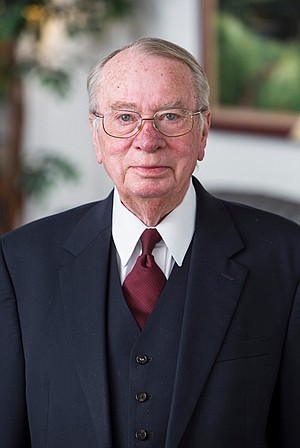 Bobby Lee Odom, 81, of Fayetteville, Ark., passed away Saturday, October 10, 2020, in Fayetteville. He was born April 14, 1939, in Albertville, Ala., to Parma Lee and Emma Inez (Chaffin) Odom.
He graduated from Murphy High School in Mobile in 1957. He attended the Marion Military Institute and graduated from the University of Southern Mississippi in 1961. After college, he began working as an insurance adjuster for Crawford and Company. First stationed in Lafayette, La., he was transferred to the Fayetteville, Ark., office in 1966. He then entered the University of Arkansas School of Law graduating in 1970. After clerking for the Arkansas Supreme Court for a year, he began practicing in Fayetteville with Walter Niblock. In 1982 he opened his own law firm in the historic Guisinger Building on the Fayetteville downtown square.
He was a member of the Alpha Tau Omega fraternity, Arkansas Bar Association, Washington County Bar Association, Arkansas Trial Lawyers Association, the Fayetteville Elks Lodge, and First United Presbyterian Church in Fayetteville.
Underneath the larger than life personality and memorable tough guy facade, was a man with a heart of gold and an unwavering determination to champion the rights of the less fortunate. In addition to being a pioneer in the legal field, he also made a difference in the lives of many. He felt privileged to put on his annual fundraising event to benefit the families of Fayetteville firefighters. Helping people was an attribute his late mother ingrained in him and it's one of his greatest legacies.
He is survived by his wife of 58 years, Alice Lana Odom; three children, Conrad (Laura) Odom, Jennifer (Scott) Walter of Oxford, Ohio, Holly Wimer of Fayetteville, Ark.; one brother, Kenneth Ray (Betty) Odom of Mobile, Ala.; and ten grandchildren.
A private family service will be held at First United Presbyterian Church in Fayetteville, where he will be interred. A Public memorial service to celebrate Bobby's life will be held at a later date. In lieu of flowers, memorial contributions may be made to the Fayetteville Firefighters Scholarship Fund at the UARK Federal Credit union account #201912004. To sign the online guest book please visit www.nelsonberna.com