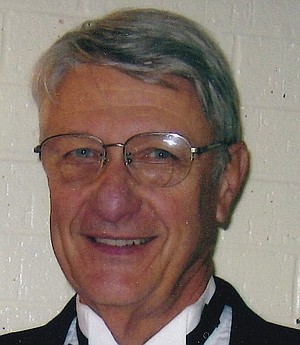 David T. Arnold Sr., 79, passed away October 28, 2020 in Fort Smith. He was born April 1, 1941, in Easton, Pa., to Lorraine John and Bertha (Jones) Arnold. Dave graduated from Lafayette College in Easton, Pa., in May of 1964 with a Bachelor of Science degree in Mechanical Engineering.
He was known as the "C" man to his family, as he worked for Dixie Cup (Georgia-Pacific), Wortz Crackers, Armbruster-Stageway (cars), did a little Management Consulting and ended his professional career when he retired from OK Industries (chickens), where he was Safety Director. He was an active member at St. John's Episcopal Church where he served as Treasurer for nine years and was a member of the church's vestry more than once, was the perpetual president of the Laymen's League, and sang in the choir. He was an active member and served on The Arc for the River Valley Board and he served on the Sparks Hospital Board of Directors. He was very involved in organizations that encompassed his children's school and college activities.
Dave was initiated and became a Master Mason in 1988. He was a member of Belle Point Masonic Lodge #20 and after holding several positions in the organization he was elected and installed as Worshipful Master of this lodge in 1995 and continued to serve in many other positions within the Blue Lodge. He was named District Deputy Grand Master (District 5) in 2009. He was elected and installed as the Most Excellent High Priest of the Grand Chapter of Royal Arch Masons for York Rite in 2012. He was a member of the Trinity Conclave Order of the Red Cross of Constantine from 2000 to present. He was also a member of the Amrita Grotto from 2012 to present, serving as Monarch in 2017. He currently served as Recorder of all York Rite Bodies (Chapter, Council, and Commandery) as well as Recorder of the Red Cross. He was elected into the Scottish Rite in 1989. He received the Gold Honor Award, Pillar of Solomon Award, Royal Arch Bronze Distinguished Service Medal and KCCH Honor. He was elected and installed as a 33rd degree Scottish Rite Mason in 2017 which is one of the highest honors one can receive in the Scottish Rite organization.
In addition to all the above Masonic bodies, he was a member of Knights of the York Cross of Honour - Albert Pike Priory No. 20 KYCH and received several medals and awards; Arkansas York Rite College No. 142; The Past Commanders Club; Holy Grail Tabernacle No. XI; Yoemen of York - Columbia Preceptory; Arkansas College - Rosicruciana Society; Masonic Home Association; Holy Order of High Priesthood; The Council of Thrice Illustrious Masters of Arkansas - Order of the Sword and Trowel; Arkansas Council No. 80, Knight Masons; M:.W:.Carson Scott Council No. 385, Allied Masonic Degrees; Jack L. Sharp Council No. 91, Knight Masons.
His hobbies included golfing, boating, fishing, gardening, and playing Bridge. He enjoyed playing a few computer games but received his most joy when he attended his grandchildren's sports activities or played board and outdoor games with his grandchildren.
He was preceded in death by his parents and one sister, May Champagne.
He is survived by his high school sweetheart Mary Ann whom he was married to for 57 years; one daughter, Lori and her husband Chris Burton, of Fort Smith; two sons, Dr. David T. Arnold Jr. and his wife Dr. Tracy Speight of Dallas, Texas, and Gregory Frank Arnold and his wife Bethany of Gainesville, Fla. Poppa/Grandpa will be missed by his five grandchildren; Isabel Arnold, Will Howard, Thomas Burton, Kyle Burton, and Lilo Arnold and all of his granddogs and grandcats. In addition to his immediate family, he leaves behind a brother-in-law, several nieces, cousins, extended family and many friends.
There will be a private outdoor Masonic funeral preceding a private family committal service which will be held at St. John's Episcopal Church columbarium, under the direction of Edwards Funeral Home.
In lieu of flowers, memorial contributions may be sent to, St. John's Episcopal Church, 215 North Sixth Street, Fort Smith, Ark., 72901 or electronically at https://stjohnfs.org/giving/, or to Belle Point Masonic Lodge #20, 6000 South Zero Street, Fort Smith, Ark., 72903.
Online condolences may be sent to: www.edwardsfuneralhome.com.