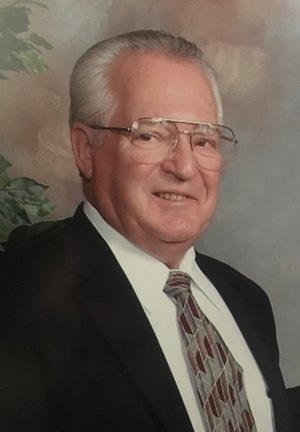 John Charles Adams, 82 of South West City, Mo. passed away peacefully at daylight surrounded by family on the ranch he loved on May 15, 2020.

John's proudest achievement was his family. Survivors include his wife Eve of 61 years, of the home, five children, 10 grandchildren, 11 great-grandchildren, one great-great grandchild and his sister Sylvia Ireland of Wentzville, Mo. He was preceded in death by his parents and a brother, George C. Adams.

John was born June 11, 1937, at the Rogers home of his grandparents. He was the firstborn son of Charlie Earl and Aileen Rhoads Adams. He moved to the Oakley Chapel area and attended Droke School, a two-room school, later graduating from Rogers High School in 1955. In high school, he was elected President of Student Council and voted friendliest boy of the senior class.

A jersey calf, a gift from his grandfather, began a lifelong career as a dairy farmer. He showed his Jerseys all over the state thru 4-H programs. He was elected to many leadership offices, including State 4-H Vice President.

In 1958, John enlisted in United Sate Air Force. He was a Russian Linguist. After graduating from Presidio of Monterey, Calif. John and Eve Donaghey were married in 1959. He was assigned as a Russian Crypt Analysis National Security Agency at Ft George G. Meade, Md. He moved his beloved Jersey cows to Maryland near the base.

John's career was devoted to agriculture and after his discharge from the Air Force, he returned to Northwest Arkansas to establish his dairy farm with his Jersey cows. John and Eve moved to Southwest City, Mo. after selling the farm near the airport in Bentonville. John sold his Jersey cows and became a rancher with Black Angus.

His love of community extended to donating and building a fire station on the ranch, installing a cell phone tower and joining in fundraising for Southwest City Missouri Library. John was a lead donor to the Crowder College Campus in Jane, Mo., and he was honored with the Distinguished Service Award.

He was a member of First Baptist Church in Southwest City, Mo. John's greatest hobby started at the age of 15 and continued for 60. He was the Southern Gospel Quartet Bass Singer for the 4 Johns; Cavaliers; Country Men; and the Corner Stone Quartet.

Memorials are requested in lieu of flowers to either:

Private graveside services will be held on Tuesday, May 19, 2020 at Oakley Chapel Cemetery in Rogers, Ark. Arrangements are under the personal care and direction of the Ozark Funeral Home in Anderson, Mo.