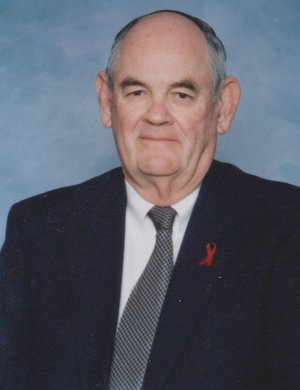 Carl was an all-around athlete (except football because his daddy said no) excelling in track, basketball, baseball, and golf. He also refereed and later in life took up fishing (Annie was always better). Just out of high school, he attended spring training with the Pittsburgh Pirates and many years later was invited to play on the senior pro golf tour but turned it down. He achieved 11 hole-in-ones (that's not a typo and that's not miniature golf) during his life!

His mad math skills morphed into computer programming where he wrote computer code like no one's business. He worked his way up in data processing with Tyson's and Wal-Mart. He became the Data Processing Manager for both Hudson Foods and George's, from where he retired. He could hold up those old manila hole-punch cards and tell you what it meant and what it would do.

Carl loved the Lord, having served as a Deacon, and was a member of Elmdale Baptist Church in Springdale.

He was preceded in death by his parents, his wife of 42 years, Donna Lou (Briley) Bell, and brothers Jimmy and Johnnie Bell.

Funeral services will be Wednesday, February 19, at 2 p.m., at Elmdale Baptist Church with visitation beginning at noon. Burial will follow in Friendship Cemetery. Arrangements are by Nelson Berna Funeral Home. Memorials may be made in Carl's memory to Elmdale Baptist Church, 1700 W. Huntsville Ave., Springdale, Ark., 72762. To place an online tribute, visit www.nelsonberna.com.