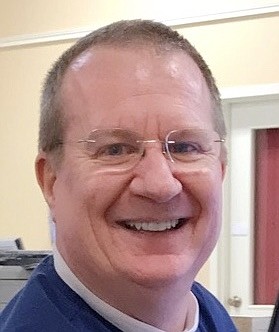 James Lee Tucker, 60, of Rogers, Ark., went home to be with the Lord on December 8, 2020, in Bentonville, Ark., after a brief stay in the hospital with complications from COVID. He was born in Fort Smith, Ark., on October 27, 1960, to Mack Tucker, Jr., and Juanita Tucker.
James graduated from Northside High School in 1979. He attended Westark Community College where he played baseball. He enlisted in the US Navy in 1982 and served until 1987. He served aboard the USS Ajax and completed two Western Pacific deployments. He owned Exotic Tropicals Aquarium Shop in Rogers, Ark., for several years before entering a new career in 2010. After earning his nursing degree at Northwest Technical Institute, he began working as a nurse at Innisfree in Rogers, where he cared for others until his death.
He is preceded in death by his parents. James is survived by his daughter, Merideth (Josh) Hanks; his son, Dallas Lee Tucker, and his love and companion, Lauri Sullins, all of Rogers; his sister, Carolyn (Rick) Beuttel of Overland Park, Kan.; and brother, Mike (Brenda) Tucker of Van Buren. "GT," Grandpa Tucker, is also survived by four grandsons, Miles Hanks, Mason Hanks, Macklin Hanks, and Maverick Hanks, all of Rogers, and nieces and nephews.
James accepted Christ as his Lord and Savior several years ago and proudly shared his good news with others. Those who knew him when he was younger know he loved playing basketball and baseball. He continued to love sports, especially the Hogs, his whole life. He also had a passion for his hobbies, especially restoring and showing old cars. He loved Big with a big heart and when someone was in need, he would be one of the first ones to help.
In lieu of flowers, memorial donations may be made to Arkansas Veterans Village Corp at https://arveteransvillage.org. The family wants to especially thank the staff at Northwest Medical Center in Bentonville, for the care and compassion they have shown him over the past few days.
Visitation will be Friday, December 11, from 9-10 a.m., at First Baptist Rogers at the Pleasant Grove Campus. A Celebration of Life will be held Friday, December 11, at 10 a.m., He will be laid to rest in Fayetteville National Cemetery. Arrangements by Epting Funeral Home of Bentonville. Condolences: www.eptingfuneralhome.webs.com