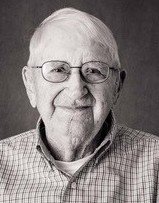 Joel Lloyd Gibson died peacefully Wednesday, November 7, 2019 at the age of 100. He had a long very full life. He was a wonderful husband, father, grandfather, uncle and friend to many people. He was a source of strength and joy to all the lives he touched. Berryville has lost a true ambassador.

Joel was born in Liberty, Arkansas on September 13, 1919. He attended a one-room school, Liberty School in Dry Fork, through second grade. Then his parents, Homer B. Gibson and Gretchen (Bunch) Gibson, moved him and his five siblings to Berryville so they could get a better education. He loved to talk about the hours he spent working on the family farm along the Osage River. The family lived off the farm raising their own food and grain for the livestock. A story he shared often was about the Great Depression in 1933, he was 14 years old, and the family was about to loose their farm. But the farm was saved when Franklin D. Roosevelt signed the Farm Relief Bill on May 12, 1933. He never forgot that and was always grateful to President Roosevelt. Joel was a founding member of the Berryville High School Future Farmers of America Chapter. The love of working the land never left him.

Joel graduated from Berryville High School in 1937. Following graduation, he and one of his brothers moved to Idaho and worked on a potato farm. World War II was about to start, and the brothers joined the Air Force together. He trained in St. Louis, Virginia and Bangor, Maine. He was stateside during the war helping open new bases along the East Coast. It was in Bangor, Maine that he met his future wife, Mildred Gray Gibson. They were married for 70 years until the time of her death in 2010. They had three children, Gail, Carol Sue and Joel.

Joel served on the Berryville City Council for 23 years. He served his church as a Deacon for over 50 years. He received the Ambassador of the Year Award from the Berryville Chamber of Commerce. He was an avid gardener, loved people, a good joke, a good story, and he cherished time spent with his family and friends. He was a very generous man, always getting great pleasure in sharing anything he had with others. He would tell you that his greatest accomplishment was his family.

Joel and his family were fortunate to have loving neighbors and caregivers, Kady and Jim Gatlin, Dozey Cody, Alex Maldonado Lopez and Sandee Gatlin.