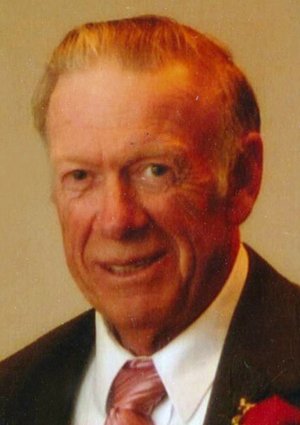 Clarence started farming in Johnsburg after graduating from high school. Clarence and Sue moved to Elkhorn, WI, where he and Sue continued their life as dairy farmers for 34 years in Elkhorn and raised their five children on the farm. He was a member of St. Patrick Catholic Church. Clarence retired from farming and became an insurance agent for Rural Mutual Insurance Company for the next 10 years. After retiring from his insurance sales career, Clarence and Sue moved from Elkhorn to Bella Vista, Ark. where he enjoyed golfing, bowling, playing cards and other social activities for the next 20 years. While in Bella Vista, Clarence was a member of St. Bernard Parish and an active member of the Knights of Columbus.

Clarence and Sue later moved to Oregon, Wis. to be closer to their family. Clarence was an active member of Holy Mother of Consolation Catholic Church and member of the church choir. Clarence enjoyed golfing, playing cards and spending time with his children, grandchildren, and great-grandchildren. Clarence and Sue were married 51 years before Sue passed away in 2004. Clarence married Marge Clemens on Nov. 10, 2006 at Holy Mother of Consolation Catholic Church in Oregon, Wis., and he continued to enjoy his family and remained active with his church and choir.

A Mass of Christian Burial will be held at Holy Mother of Consolation Catholic Church, 651 N. Main St., Oregon, at 11 a.m., on Saturday, Jan. 4, 2020, with Fr. Gary Wankerl presiding. A luncheon will follow in Consolation Hall. Visitation will be held at the church from 9 a.m. until the time of the Mass on Saturday. Interment next to his wife, Sue, at St. John the Baptist Cemetery in Johnsburg, Ill. will be held at a later date.

In lieu of flowers, memorials may be gifted in Clarence's name to Holy Mother of Consolation Music Ministry. Online condolences may be made at www.gundersonfh.com.