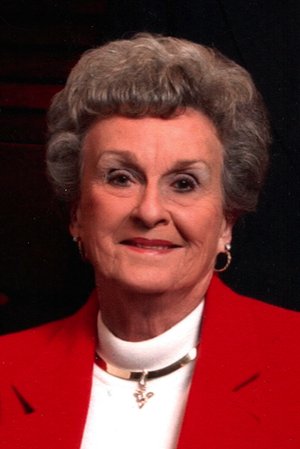 Florene Shannon, who loved her family and many friends and remained active well into her 90s, died on May 8, 2018, at The Sheridan of Overland Park, Kansas. She was 97 1/2.

She is survived by her son, Thomas Shannon and his former wife, Dottie Joyce in Denver, Colorado; daughter, Barbara Mickey and her husband Kenneth of Overland Park, Kansas; four grandchildren; Brian Mickey and his wife Judy of Shawnee, Kansas, Darin Mickey and his wife Kaori of Bronx, New York; Megan Shannon and Angela Graziano fka Horne of Denver; six great-grandchildren; Lauren, Emily, and Max Mickey, La Marr Shannon, and Mia and Sam Horne; and numerous nieces and nephews. Florene was preceded in death by her husband, Elmer W. "Spike" Shannon, in 2011, by their son Kenneth in 1967, by one grandchild Kelsey Shannon in 2008, by her parents and by her four siblings, Helen, Larry, Ed and Jack.

Florene Caroline Becker was born November 8, 1920, in Kansas City, Missouri, to Lawrence and Esther Becker, and was the oldest of five siblings. She was named after her grandmother, Flora Breen.

Florene rode a street car to classes at Paseo High School in Kansas City, Missouri, and after graduation in 1937, she went to work for Hallmark Cards in its layout department.

he married Spike Shannon on August 28, 1943, in Kansas City. They met while ice skating and a friend set them up for their first date. He died August 18, 2011, at the age of 90 at their home in Rogers, Arkansas.

She enjoyed sharing in her husband's business success and the life of travel and adventure that helped to keep them happy and young; she was on the go, busy all the time.

After she and Spike were married, they lived in Decatur, Illinois, for a year before returning to Kansas City. They raised their three children in homes in Roeland Park, Kansas. Florene and Spike lived in St. Louis from 1969-72 before moving to Rogers, Arkansas, and building their retirement home at Pinnacle Country Club where at the age of 80, Florene recorded a hole in one. While living in Rogers, she joined Beta Sigma Phi and encouraged her daughter, Barbara to join the social sorority as well.

She was an active homemaker and enjoyed involvement in PTA, bowling, golf, bridge, cards (31), sewing and crafts, and entertaining family and friends. She worked as a hospital volunteer at St. John's Hospital in St. Louis, Missouri, and at Rogers Memorial Hospital.

The date of her death, May 8, was the same date that their first-born, Kenneth, was born. He died in a car accident in the Ozarks in 1967.

Florene took pride in dressing well and in her younger days often wore the clothing that she had sewed herself. The night before she died, Florene told her daughter she had an appointment at the beauty shop the next morning.