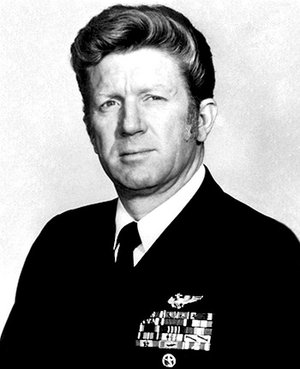 Ron was commissioned an Ensign in the U.S. Navy through the Navy ROTC Program at the Illinois Institute of Technology on June 8, 1956, and then completed flight training, earning his designation as a Naval Aviator on May 2, 1958. He deployed many times in his career, including four deployments to Southeast Asia. It was during his fourth deployment on May 7, 1972, that Ron was forced to eject over North Vietnam and was taken as a prisoner, finally being released after 326 days in captivity.

He continued to serve until retiring from the Navy on Nov. 1, 1979, at the rank of Captain. His awards included the Purple Heart, Distinguished Flying Cross, Bronze Star and Air Medal among others. Ron was a member of the Vietnam POW Association, the American Legion, the Red River Fighter Pilots Association, Veterans of Foreign Wars, Disabled American Veterans, the Military Officers Association of America and the Phi Kappa Sigma Fraternity.

In later years, Ron enjoyed traveling with Veda and they traveled far and wide in their RV. He also enjoyed spending time with his family.

Ron was preceded in death by his parents.