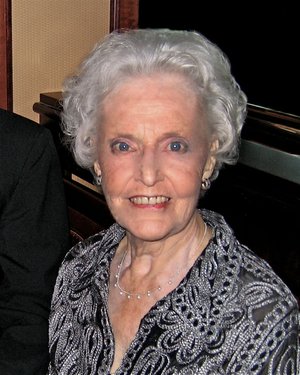 Penelope "Penny" Mellott Fox, 87, of Fayetteville, Ark., passed away on May 22, 2013. Penny was born April 24, 1926, to Cora Mae Fleck and Martin Lloyd Mellott in Riddlesburg, Pa. After the death of her parents, she moved to Kansas City, Kans., to live with her uncle, Judge Arthur J. Mellott and family.

Penny graduated from Mount Vernon High School in Alexandria, Va. She received her bachelor's of science in education in 1948 from Radford State Teachers College in Radford, Va. She married Naval officer, John E. Fox in 1950 and spent the next 16 years as a military wife stationed throughout the United States, the Philippines and Sicily.

Penny was a gifted and innovative third-grade teacher, receiving numerous awards for excellence in economic education. She worked as a consultant for the State Department of Education conducting workshops in economic education at the University of Arkansas, Fayetteville, for many summers. In 1982, she was named Fayetteville Teacher of the Year. After 21 years at Asbell Elementary, she retired to her first loves of gardening and grandchildren.

Penny is predeceased by her loving husband of 60 years, her parents and all 13 of her siblings.

The family wishes to extend special thanks to Penny's care-giver, Shirley Dixon, with whom she spent many precious hours, and to the caring professionals at Willard Walker Hospice Home for their exceptional care in her final days.

A memorial service will be at 11 a.m. Wednesday at Central United Methodist Church in Fayetteville under the direction of Moore's Chapel.

Memorial gifts may be directed to the Bessie Moore Center for Economic Education, Gift Services, 300 UNHS, 1 U of A, Fayetteville, AR 72701.