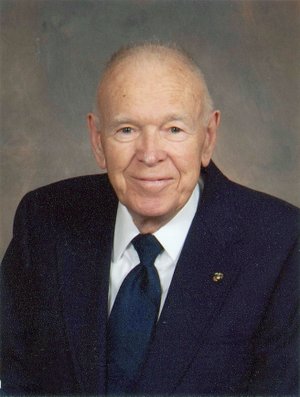 He was reared in Jonesboro, Ark., and was valedictorian at Valley View High School in 1945. He attended Arkansas State College for one year. In 1946, at the age of 17, Max joined the Marine Corps as one of nine Jonesboro teenagers who enlisted together. He attended aircraft ordinance school and served aboard the aircraft carrier Bairoko in the Pacific. He was an aircraft armorer and was assigned to the crash-rescue team.

In September 1952, while attending University of Arkansas, he married Betty Irene Nickell of Hazel Valley, Ark. Upon receiving his degree in civil engineering, he worked briefly at Boeing Aircraft in Wichita, Kan.

Max was then commissioned in the Army Field Artillery. He reported to Fort Sill, Okla., for duty and was honorably discharged at the end of the Korean War.

He and Betty moved to California to attend Golden Gate Baptist Theological Seminary. During this time, Max worked as an engineer for the California Highway Department and Chef-Boyardee. He was also the pastor of El Cerrito Baptist Church. Upon receiving his degree, he and Betty moved to Bangkok, Thailand, where they served as Southern Baptist missionaries for 32 years with the International Mission Board. In 1993, Max and Betty retired from the mission field, settling in Jonesboro, Ark.

Max was active with several organizations including the American Legion, Military Officers Association of America, Disabled American Veterans, Craighead County Veterans Monument Foundation and Baptist Disaster Relief. He was a member and Sunday School teacher at Nettleton Baptist Church and volunteered in the church prayer room.

Max is preceded in death by his parents, James Otto Alexander and Alice Beatrice Blalock.

Funeral service will be held at 2 p.m. Thursday, May 16, at Emerson Memorial Chapel, with the Revs. Bruce Tippit and Stan Ballard officiating. Burial will follow at Jonesboro Memorial Park Cemetery with Emerson Funeral Home in charge.