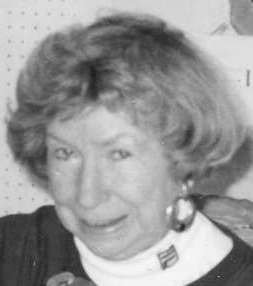 Kathryn J. Lopshire achieved 90 years of creative living before she passed on May 1 at Innisfree Health & Rehabilitation in Rogers. Born Aug. 15, 1922, in Worthington, Minn., where the depression forced "Kack" to design dolls with "found" objects and sketch in "dustbowl" dirt on porch tables. Art scholarships and college followed until the war effort took her west with her sisters to California where she met and married a handsome Seabee from back home, Val Lopshire. Later, they moved to Kansas City where she worked as an engineering draftsman, dress designer and mother of three. While on vacation they fell in love with the Ozarks and semi-retired to the sleepy little town of Bentonville, Ark. For more than 40 years, Kathryn was an active part of the artistic community in NWA. As her clothing designs and custom home decor business grew, she added antiques, art, and collectibles and built "Kack's Kabin" on Hwy. 12, Rogers. Later, it became Studio 12, an art gallery where workshops, paint-ins, and community thrived. Finding inspiration in her travels to colorful locales as diverse as Hawaii, Mexico, Europe and the Ozarks, Kathryn is most noted for her collage technique and impressionistic use of various mediums. Her work has been shown, collected, awarded and admired. Among her greatest fans are her family who will honor her by a memorial tour of Crystal Bridges, her favorite place. Kathryn is survived by her three children and their spouses, Valorie Sockwell (Bill), Brad Lopshire (Nancy) and Doug Lopshire (Charlene), and her four grandchildren, Liz O'Connell, Peter Sockwell, Bryan Lopshire, and Emily Lopshire, and her two beloved sisters, Faith Strom of Worthington, Minn., Marylee Thompson of Hernando, Fla., and brother, Keith Hansberger (Marilyn) of Lexington, Texas, and an abundance of loving nieces and nephews.

In lieu of flowers memorials may be made to the Arts Center of the Ozarks, Springdale, Ark., Samaritan Community Center, Rogers, Ark., or your local hospice. Arrangements are with Benton County Memorial Park Funeral Home, 3800 W. Walnut, Rogers.