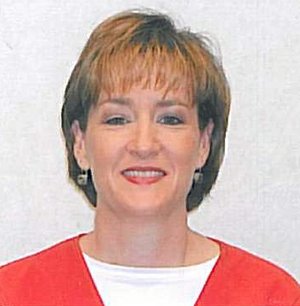 Janet Leigh "Hudgens" Pate was born in Sweetwater, Texas, on Dec. 25, 1962, the daughter of Raymon and Wendy Milligan, and she went to be with Jesus on Dec. 26, 2013, after her two-year courageous battle with cancer.
Janet leaves her husband, Tony Pate, of 19 years, along with two children and two grandchildren, Bryan Buettemeyer, wife Jenna, and their sons, Hudson and Rhett, of Bentonville, Ark., and Jordan Street and husband, David, of Bentonville, Ark. She also leaves two step-children, Christopher Pate, wife Kacee and children, Addison, Cadence and Jaxon of Houston, Texas, and Alesha Coleman, husband Eric and children, Kaitlyn, Kimberly and Carter of Nashville, Tenn. Janet is survived by two brothers, Mike Hudgens and wife, Melinda, of Abilene, Texas, and David Hudgens and wife, Traci, of Denison, Texas.
Janet was raised in Abilene, Texas. She graduated from Cooper High School in Abilene in 1980. Janet had her two children with her first husband, Charles Buettemeyer, who passed away in 1993.
She married Tony in 1994. They moved to Bentonville, Ark., in 1997 and became active members in First Baptist Church of Bentonville, where Janet has served in the student ministry for the past 12 years.
Janet's life, although only a short 51 years, was vibrant and filled with purpose. Anyone who knew Janet considered her a close friend and as a person who was always quick to give glory to The Lord in every circumstance.
This final chapter of her life, as she battled ovarian cancer, gave her a strong platform to proclaim God's goodness and faithfulness, and she did so with such grace and perseverance until her last breath.
The visitation will be held from 4-7 p.m. on Sunday, Dec. 29, 2013, and her celebration service will be held on Monday, Dec. 30, 2013, at 10 a.m. Both services will take place at First Baptist Church of Bentonville. Burial will follow in Bentonville Cemetery.
In lieu of flowers, donations can be made to the "Janet Pate Memorial Fund" which will provide youth camp scholarships and help fund future expansion of the youth building.
Donations can be mailed to First Baptist Church of Bentonville at 220 S. Main St., Bentonville, AR 72712, and please be sure to include "Janet Pate Memorial Fund" in the memo line.
Arrangements have been entrusted to Stockdale-Moody Funeral Services of Rogers. Online condolences may be made at stockdalefuneral.com.