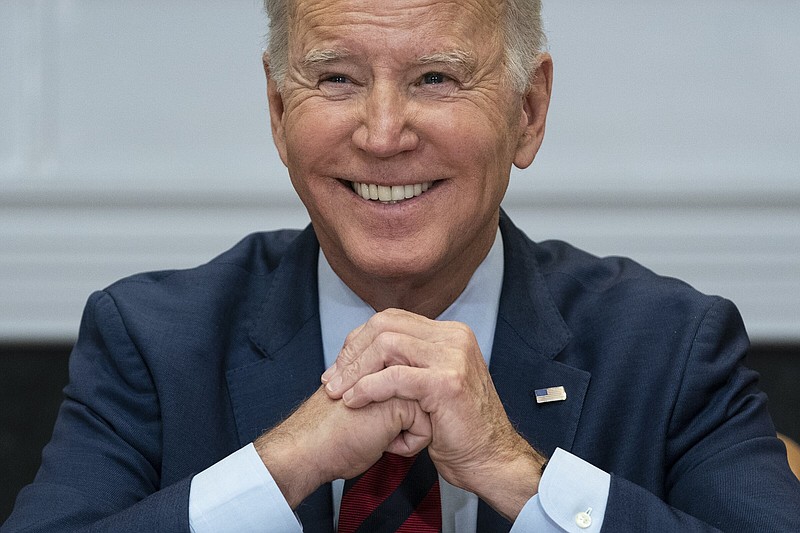 President Joe Biden speaks during a meeting with Democratic lawmakers in the Roosevelt Room of the White House, Tuesday, Jan. 24, 2023, in Washington. (AP Photo/Evan Vucci)

WASHINGTON -- President Joe Biden hosted the Democratic congressional leaders Tuesday at the White House as they stare down a debt ceiling crisis with a new House Republican majority eager for confrontation.

The president and the top Democrats used the private gathering in the Roosevelt Room to project a unified front against what Biden called "extreme Republican economic plans."

Rather than enter into negotiations with House Republicans to cut spending in exchange for raising the debt ceiling, the White House has stressed repeatedly that it wants Congress to lift the borrowing capacity without conditions. Democrats said it's up to Republicans to go public about what budget cuts the new House majority wants to make.

"Apparently they're genuinely serious about cutting Social Security, cutting Medicare," Biden said about the GOP proposals as he sat down with the Democratic leaders from the House and the Senate.

As the meeting began, Biden said Democrats were eager to talk about GOP extremes. He scoffed at the Republicans' proposed 30% sales tax.

"Look, I have no intention of letting the Republicans wreck our economy," Biden added.

This go-around, Biden and his Democratic allies in Congress are in no mood to broker deals with a new era of hardline Republicans led by the Freedom Caucus.

House Speaker Kevin McCarthy is eager to push Biden to the negotiating table, hoping to make good on the promises the GOP leader made to holdouts during his campaign to become House speaker to pare federal spending back to fiscal 2022 levels, which would be an 8% budget cut.

The White House said it plans to invite McCarthy soon for a meeting.

In the Senate, Republicans are letting McCarthy and the House GOP take the lead in talks with Biden.

Senate Minority Leader Mitch McConnell said Tuesday, "I think it is entirely reasonable for the new speaker and his team to put spending reduction on the table."

McConnell said of McCarthy's yet-unscheduled session with Biden: "I wish him well and in talking to the president. That's where a solution lies."

After the White House meeting, House Minority Leader Rep. Hakeem Jeffries, D-N.Y., said: "We have a responsibility to pay the debts that the Congress has already incurred. That is what the debt ceiling is all about."

"Republicans are in chaos," Schumer said.

The government bumped up against its legal borrowing capacity last Thursday, prompting Treasury to take accounting steps regarding federal employees' retirement and health care plans that will enable the government to stay open until roughly June.

As of Monday, Yellen wrote that she also determined that the government "will be unable to invest fully" in the government securities portion of the thrift savings fund in the federal employees' retirement system.

She noted that her predecessors have taken a similar action in the past, noting that by law the accounts "will be made whole once the debt limit is increased or suspended."