Police mum on past of rampage suspect 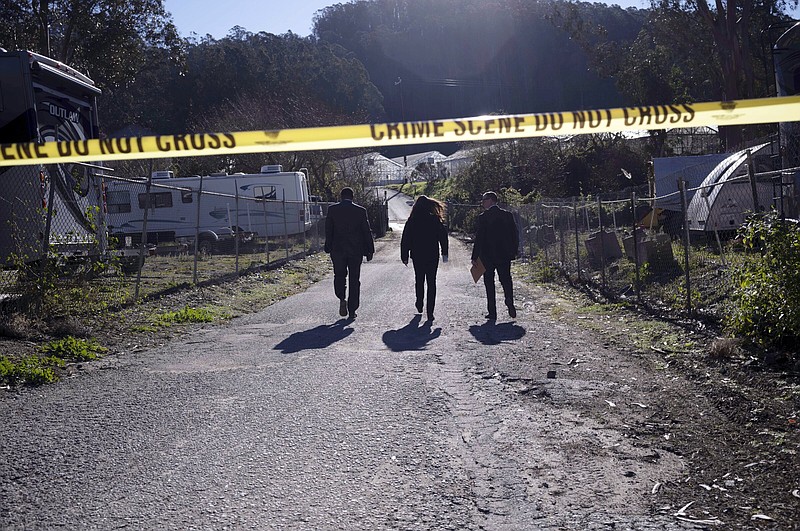 FBI officials walk towards from the crime scene at Mountain Mushroom Farm, Tuesday, Jan. 24, 2023, after a gunman killed several people at two agricultural businesses in Half Moon Bay, Calif. Officers arrested a suspect in Monday’s shootings, 67-year-old Chunli Zhao, after they found him in his car in the parking lot of a sheriff’s substation, San Mateo County Sheriff Christina Corpus said. (AP Photo/Aaron Kehoe)

HALF MOON BAY, Calif. -- An agricultural worker killed seven people in back-to-back shootings at two mushroom farms that had employed him in Northern California and the massacre is believed to be a "workplace violence incident," officials said Tuesday.

Officers arrested Chunli Zhao, 66, after they found him Monday in his car in the parking lot of a sheriff's substation, San Mateo County Sheriff Christina Corpus said.

Authorities believe Zhao acted alone when he entered the Mountain Mushroom Farm in Half Moon Bay, Calif., where he worked, and opened fire, killing four people and leaving another seriously wounded. He then drove to another nearby farm where he had previously worked and killed another three people, said Eamonn Allen, a spokesman with the San Mateo County sheriff's office.

At a news conference Tuesday, Allen declined to answer questions about whether Zhao had any previous criminal history, saying, "there were no specific indicators that would have led us to believe he was capable of something like this."

"All of the evidence we have right now points to a workplace violence incident," Allen said.

The dead were five men and two women. The eighth gunshot victim, a man, remained in the hospital. Some were Asian and others were Hispanic, and some were migrant workers.

Court documents show that in 2013, Zhao was accused of threatening to split a coworker's head open with a knife and separately tried to suffocate the man with a pillow, the San Francisco Chronicle reported Tuesday.

The two were roommates and worked at a restaurant at the time, and the man, identified as Jingjiu Wang, filed a temporary restraining order against Zhao, which is no longer in effect.

Wang could not be immediately reached. The owner of Mountain Mushroom Farm, where Zhao is accused of killing four and injuring a fifth person, could not immediately be reached.

After the first incident, Zhao is accused of killing three others at nearby Concord Farms. Owner Aaron Tung said in a statement that the facility was waiting for more information before it could comment. He thanked the community for its support.

Aerial television images Monday showed police officers collecting evidence from a farm, which appeared to be the location where police found four dead. Tuesday morning, police continued to block off the location. There was little visible activity at the second farm.

About two hours after first receiving reports of a shooting, a sheriff's deputy spotted Zhao's car parked outside a sheriff's substation and arrested him.

"He did not actively surrender to us," Allen said, declining to answer a question on why Zhao had driven there.

Video showed three officers approaching a parked car with drawn weapons. Zhao got out of the car and the officers pulled him to the ground, put him in handcuffs and led him away. A weapon was found in the vehicle, officials said.

Information for this article was contributed by Jocelyn Gecker and Janie Har of The Associated Press.

Print Headline: Police mum on past of rampage suspect