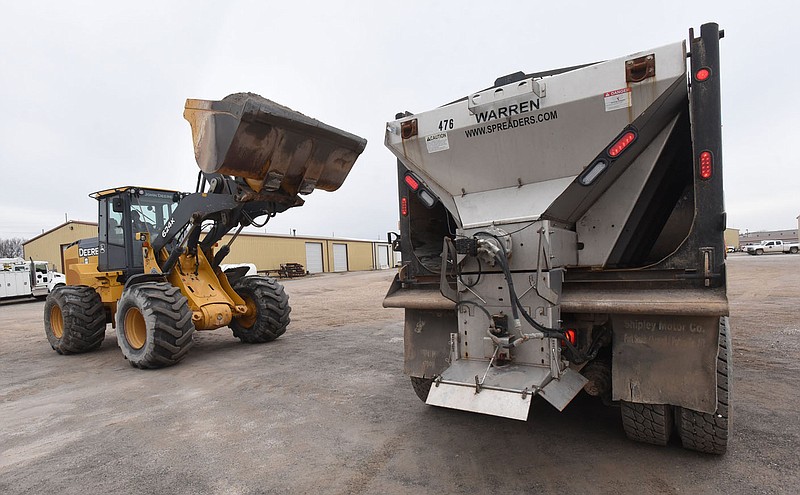 Crews get spreader trucks ready Tuesday at the Benton County Road Department to prepare for snow in the forecast. Workers adjusted their schedules Tuesday to be out on the roads Tuesday night and Wednesday morning, said Melody Kwok, county spokeswoman. Go to nwaonline.com/photos for today’s photo gallery. (NWA Democrat-Gazette/Flip Putthoff)

FAYETTEVILLE -- A major winter storm moved into Northwest Arkansas on Tuesday with forecasters predicting up to a foot of snow in higher elevations.

By 8:30 p.m., about 4-5 inches had fallen in Fayetteville, with higher accumulation in elevated areas of the city and Washington County, said Mike Teague with the National Weather Service in Tulsa. Teague expected another few inches to fall overnight, leaving most in the county waking up to about 6-8 inches, he said.

Temperatures in the region reached about 30 degrees at their lowest, Teague said.

"It's kind of a wet, sloppy snow," he said. "Obviously that much snow has an impact for travel, but it's not like if it were 10 degrees colder and roads were truly snow-packed."

Fayetteville police responded to a handful of traffic accidents once snow started falling in the city Tuesday afternoon into the evening, said Sgt. Anthony Murphy. Township Street east of College Avenue was temporarily shut down in the evening while crews repaired a gas line struck by a vehicle, he said.

The Washington County sheriff's office reported a number of stalled vehicles and impassable roads. Seven vehicles were stuck on Arkansas 74 at McGuire Mountain outside Elkins about 6:45 p.m., according to the department's Facebook page. Large trees blocked roads in the Harris Community and near Salem Cemetery in Elkins.

Snow fell in Benton County later than it did Washington County, Teague said, as temperatures there largely stayed above freezing in the afternoon.

Rogers Fire Chief Tom Jenkins said Tuesday evening he had only heard of a few downed power lines and no major traffic accidents.

Bart Haake, a meteorologist with the National Weather Service in Tulsa, said the temperatures will remain fairly constant in the low-to-mid-30s through the duration of the storm.

"There's not a whole lot of cold air associated with this storm," Haake said.

The storm will pass through the area quickly, he said, with only a 20% chance of snow in the forecast for today.

Gov. Sarah Huckabee Sanders on Tuesday activated a five-person Winter Weather Support Team from the 142nd Field Artillery Brigade to support Troop L of the Arkansas State Police in Northwest Arkansas during the storm. The team will operate around the clock until no longer needed.

Each team will travel state police-designated roads to assist motorists and help them to safety. Teams aren't authorized to recover privately owned or commercial vehicles. If the need arises, teams are permitted to recover first responder emergency vehicles to a safe area if they are able to do so.

Some local organizations prepared shelters Tuesday for the homeless in advance of the storm.

"The temperatures Wednesday night and Thursday morning could be deadly for our neighbors who shelter outside," Mike Williams, CEO at 7hills Homeless Center, said in a news release Tuesday afternoon.

The 7hills Homeless Center, Genesis Church, New Beginning Bridge Housing Community, NWA Continuum of Care and The Salvation Army of Northwest Arkansas have teamed up to provide shelter when the temperatures reach a wind chill or "feels-like" temperature of 15 degrees or less.

During the evening, once the emergency shelter at Salvation Army reaches capacity, Genesis Church will open its doors to operate an emergency overflow shelter. New Beginnings and Micah 6:8 Ministries provide staffing for the overnight shelter.

At 6 a.m., Genesis Church and The Salvation Army close their overnight shelter. Transportation is provided to 7hills Homeless Center, which opens early on these cold days to provide a warming center, coffee, breakfast and lunch, winter clothing and bathrooms. The 7hills center extends their normal operating hours to 6 p.m. to complement the Genesis Church shelter operating hours.

Jeff Crowder, Washington County's road superintendent, said his department has deployed some new equipment for this storm, with crews in the field being issued devices that can detect live power lines.

"With the wet ground we've got, it won't take much weight on the tops of these trees to bring them down," Crowder said. "If the trees are down on a line and they're still charged, these monitors can detect that. That way we can notify the power companies to come out and shut the lines down before we get into them. A lot of times you think that because the lines are down they're not active and sometimes, especially at night, you don't see the lines."

Dave Parker, spokesman for the Arkansas Department of Transportation, said the state has sent extra crews and equipment to Northwest Arkansas and workers were out treating some roads with a salt brine mixture as early as Monday morning. Parker said the timing of the storm made the decision to pre-treat "a judgment call."

"We understand that with the rain some of the salt brine may wash off, but if it helps even a little bit we're ahead of the game," Parker said.

Parker said that statewide, the dividing line for areas predicted to receive snow falls along Interstate 30 through Little Rock with areas to the northwest expected to get most of the snow.

"We've got extra crews out in Russellville, they're predicting some snow in Russellville and that area," he said. "We're in Fort Smith and in both Benton and Washington counties and the Northwest Arkansas area."

Haas Hall will have remote learning at its Northwest Arkansas campuses.

The Bentonville School District declared a snow day today and will make up the day on May 26.

Tips for Driving in the Snow

• Stay home. Only go out if necessary. Even if you can drive well in bad weather, it’s better to avoid taking unnecessary risks by venturing out.

• Drive slowly. Always adjust your speed down to account for lower traction when driving on snow or ice.

• Accelerate and decelerate slowly. Apply the gas slowly to regain traction and avoid skids. Don’t try to get moving in a hurry and take time to slow down for a stoplight. Remember: It takes longer to slow down on icy roads.

• Increase your following distance to five to six seconds. This increased margin of safety will provide the longer distance needed if you have to stop.

• Know your brakes. Whether you have antilock brakes or not, keep the heel of your foot on the floor and use the ball of your foot to apply firm, steady pressure on the brake pedal.

• Don’t stop if you can avoid it. There’s a big difference in the amount of inertia it takes to start moving from a full stop versus how much it takes to get moving while still rolling. If you can slow down enough to keep rolling until a traffic light changes, do it.

• Don’t power up hills. Applying extra gas on snow-covered roads will just make your wheels spin. Try to get a little inertia going before you reach the hill and let that inertia carry you to the top. As you reach the crest of the hill, reduce your speed and proceed downhill slowly.

• Don’t stop going up a hill. There’s nothing worse than trying to get moving up a hill on an icy road. Get some inertia going on a flat roadway before you take on the hill.