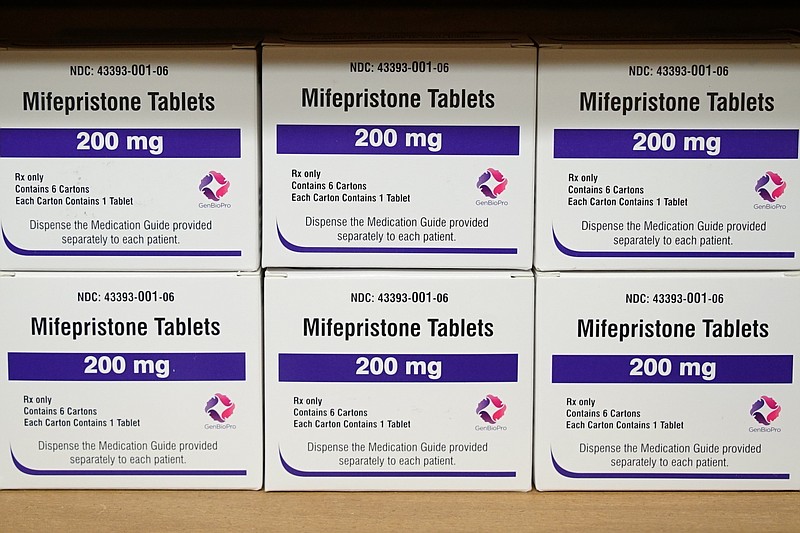 FILE - Boxes of the drug mifepristone sit on a shelf at the West Alabama Women's Center in Tuscaloosa, Ala., on March 16, 2022. Lawsuits have been filed in West Virginia and North Carolina challenging the states' restrictions on the use of abortion pills. (AP Photo/Allen G. Breed, File)

The lawsuits argue that limits on the drugs in North Carolina and West Virginia run afoul of the federal authority of the U.S. Food and Drug Administration, which has approved the abortion pill as a safe and effective method for ending pregnancy.

The cases were brought by a North Carolina physician who prescribes the pill, mifepristone, and GenBioPro, which makes a generic version of the drug and sued in West Virginia.

While the federal court lawsuits target specific state laws, they represent key legal tests that could eventually determine access to abortion for millions of women. Medication recently overtook in-clinic procedures as the most common form of abortion in the U.S.

The new litigation turns on a longstanding principle that federal law, including FDA decisions, pre-empt state laws. Indeed, few states have ever tried to fully ban an FDA-approved drug because of past rulings in the agency's favor.

But with the fall of Roe v. Wade there's little precedent for the current patchwork of laws governing abortion.

After the Supreme Court overturned the decision in June, previously adopted restrictions on abortion kicked in and two states adopted new ones. Currently, bans on abortion at all stages of pregnancy are being followed in 13 states.

On top of that, 19 states — including North Carolina and West Virginia — have separate laws controlling how, when and where physicians can prescribe and dispense abortion drugs.

"West Virginia cannot override the FDA's safety and efficacy determinations, nor can it disrupt the national market for this medication," David Frederick, an attorney representing GenBioPro, said in a statement.

Legal experts foresee years of court battles over access to the pills.

North Carolina bans nearly all abortions after 20 weeks, with narrow exceptions for urgent medical emergencies. Physicians can only prescribe medication abortion after state-mandated counseling for their patients and must dispense the drug in person.

The lawsuit, filed by Dr. Amy Bryant, an obstetrician and gynecologist, argues that such requirements contradict FDA-approved labeling for the drug and interfere with her ability to treat patients.

"We know from years of research and use that medication abortion is safe and effective — there's no medical reason for politicians to interfere or restrict access to it," Bryant said in a statement provided by the Expanding Medication Abortion Access project, an abortion rights group working on legal challenges to state laws.

The office of Attorney General Josh Stein, who is a defendant in the complaint because he's the state chief law enforcement officer, was reviewing the complaint on Wednesday, his spokesperson Nazneen Ahmed wrote in an email. Stein, a Democrat who announced last week a bid for governor in 2024, is an abortion-rights supporter.

The FDA approved mifepristone in 2000 to end pregnancy, when used in combination with a second drug, misoprostol. The combination is approved for use up to the 10th week of pregnancy.

For more than 20 years, FDA limited dispensing of the drug to a subset of specialty offices and clinics, due to safety concerns. In rare cases, the drug combination can cause excess bleeding, requiring emergency care. But since the start of the COVID-19 pandemic, the agency has repeatedly eased restrictions and expanded access, increasing demand even as state laws make the pills harder to get for many women.

In late 2021, the agency eliminated the in-person requirement for the pill, saying a new scientific review showed no increase in safety complications if the drug is taken at home. That change also permitted the pill to be prescribed via telehealth and shipped by mail-order pharmacies.

Earlier this year the FDA further loosened restrictions by allowing brick-and-mortar pharmacies to dispense the drug, provided they undergo certification.

That change was made at the request of the two drug manufactures: GenBioPro and Danco Laboratories, which makes brand-name Mifeprex.

In its West Virginia lawsuit, GenBioPro argues that state laws interfere with drug regulations crafted by the FDA, which has sole authority over the approval and regulation of all U.S. drugs.

West Virginia's law outlaws most abortions, with some exceptions for rape and incest victims and in cases of life-threatening medical emergencies and nonviable pregnancies. The near-total ban, signed into law in September, supersedes earlier laws on abortion pill access.

"The ban and restrictions make it impossible for GenBioPro to market and distribute mifepristone in West Virginia in accordance with FDA's requirements," the company states in its suit filed in the state's southern federal district.

West Virginia Attorney General Patrick Morrisey said he would defend the new abortion law. "While it may not sit well with manufacturers of abortion drugs, the U.S. Supreme Court has made it clear that regulating abortion is a state issue," he said in a statement.

Abortion opponents have filed their own lawsuits seeking to halt use of the pill, including a Texas suit arguing that the FDA overstepped its authority in approving the medication. Anti-abortion groups on Wednesday vowed to support state abortion limits.

"We stand with the people of North Carolina and West Virginia against the abortion lobby's reckless push to mandate abortion on demand in every state," said Marjorie Dannenfelser of the Susan B. Anthony Pro-Life America group.

Mifepristone dilates the cervix and blocks the effects of the hormone progesterone, which is needed to sustain a pregnancy. Misoprostol, a drug also used to treat stomach ulcers, is taken 24 to 48 hours later. It causes the uterus to cramp and contract, causing bleeding and expelling pregnancy tissue.