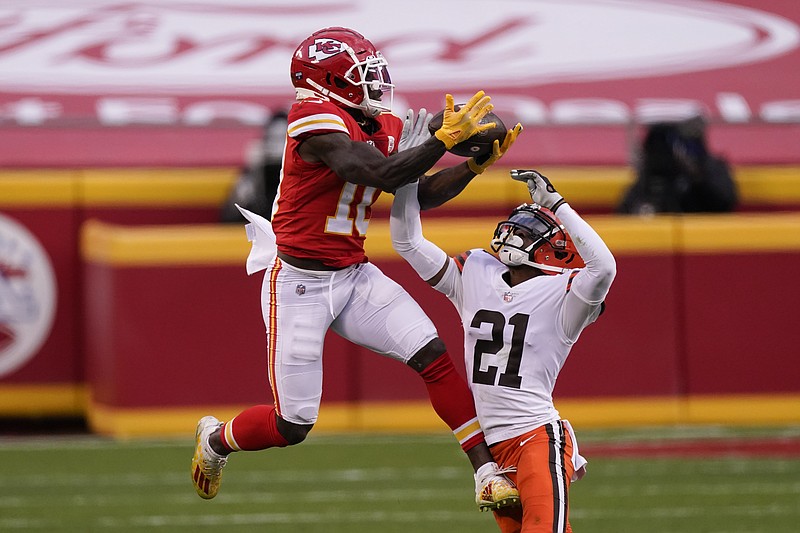 FILE - Kansas City Chiefs wide receiver Tyreek Hill makes a catch over Cleveland Browns cornerback Denzel Ward (21) during the second half of an NFL divisional round football game, Sunday, Jan. 17, 2021, in Kansas City. The Chiefs could have paid Tyreek Hill handsomely and gone all-in on another championship run. Instead, they dealt him to the Dolphins for a package of draft picks and some financial flexibility. In doing so, they took a championship window that might have lasted a few years and extended it by several more. It was a difficult decision, though, and one the Bengals – their opponent in Sunday’s AFC title game – will soon face. (AP Photo/Charlie Riedel, File)

Do they sign wide receiver Tyreek Hill to a long-term deal or trade him away?

Two options, yet two very different ways to chart a course for the future of the franchise.

Veach mulled the decision for the better part of six weeks, knowing full well most Chiefs fans wanted to keep the dynamic playmaker, but that it would saddle the club with salary cap problems for years to come.

In late March, he hopped on the phone with Miami Dolphins counterpart Chris Grier and made the deal: Hill was headed to South Beach for a package of five draft picks -- which the Chiefs could use to fortify their roster -- and much-needed financial flexibility.

"We took a step back and figured, 'How are we going to get better on both sides?' And that's why we decided it was best for us and best for Tyreek," Veach said at the time. "It was kind of a best-case scenario for us and for him."

Hill ultimately became the league's highest-paid wide receiver, signing a $120 million, four-year deal with the Dolphins that would have limited what the Chiefs could do in free agency.

And the Chiefs used their draft capital and financial freedom to replenish a roster that will face Cincinnati on Sunday night in its fifth consecutive AFC title game.

The Chiefs used the first-round pick from Miami -- after a trade with New England -- on Trent McDuffie, whose metrics are among the best of any rookie cornerback this season. Then they used their second-rounder from the Dolphins -- after another trade with the Patriots -- on wide receiver Skyy Moore, who has been a versatile addition to the offense.

Just as importantly, the Chiefs used the money they would have spent on Hill elsewhere: They signed wide receivers JuJu Smith-Schuster and Marquez Valdes-Scantling, brought in safety Justin Reid, added veteran Carlos Dunlap to help one of the league's worst pass rushes, and had money left over to improve their depth elsewhere.

"Brett does it as well as anybody on finding people and bringing them in, that he thinks will fit in the offense, defense and special teams," Chiefs Coach Andy Reid said. "We have full trust in him as a coaching staff."

It's easy to have that trust given the results.

Hill had an incredible season for the Dolphins, catching a career-best 119 passes for 1,710 yards with 7 touchdowns. But while Smith-Schuster finished with only 78 catches for 933 yards and 3 touchdowns, that still means he supplied Kansas City with roughly 55% of Hill's production in the regular season at roughly 14% of the cost.

Valdes-Scantling caught the decisive touchdown in last weekend's divisional win over Jacksonville, and along with Moore and Smith-Schuster, the trio helped the Chiefs lead the league in passing offense, scoring offense and total offense.

On the flip side, Dunlap helped the Chiefs to 55 sacks in the regular season, which ranked second in the league, after they had just 31 the previous year. Justin Reid proved to be a calming yet physical presence in the defensive backfield.

"All the guys stepped up," Chiefs wide receivers coach Joe Bleymaier said, "because there were a number of departures, not just Tyreek, to basically get all caught up and sped up to where we are today, so that we could just keep going as an offense, and the guys we brought in bought into that."

Ten months later, it would be difficult to argue Veach didn't make the right decision to trade Hill.

It's the kind of monumental decision the Bengals will face soon enough.

They've already indicated plans to negotiate a long-term deal this offseason for Joe Burrow, who could command as much as $50 million a year. And with that kind of investment in their quarterback, the Bengals will have to decide what to do with their pending free agents: Starting cornerback Eli Apple, safeties Vonn Bell and Jessie Bates III and tight end Hayden Hurst are all due to hit the open market, along with backups such as Tre Flowers and Samaje Perine.

Plenty of other starters -- wide receivers Tyler Boyd and Tee Higgins, and defensive tackle D.J. Reader -- will be hitting free agency after next season.

The challenge in making the numbers work was evident in August, when Bates stayed clear of the Bengals amid a contract dispute. He eventually reported to training camp after signing a franchise tender worth about $13 million, rather than sit out the entire season. When asked why a deal wasn't reached, he replied: "That's not my question to answer."

"There's a business side of things," Bengals Coach Zac Taylor said at the time, "and that plays into it some."

Just as it did for the Chiefs and Hill last offseason. 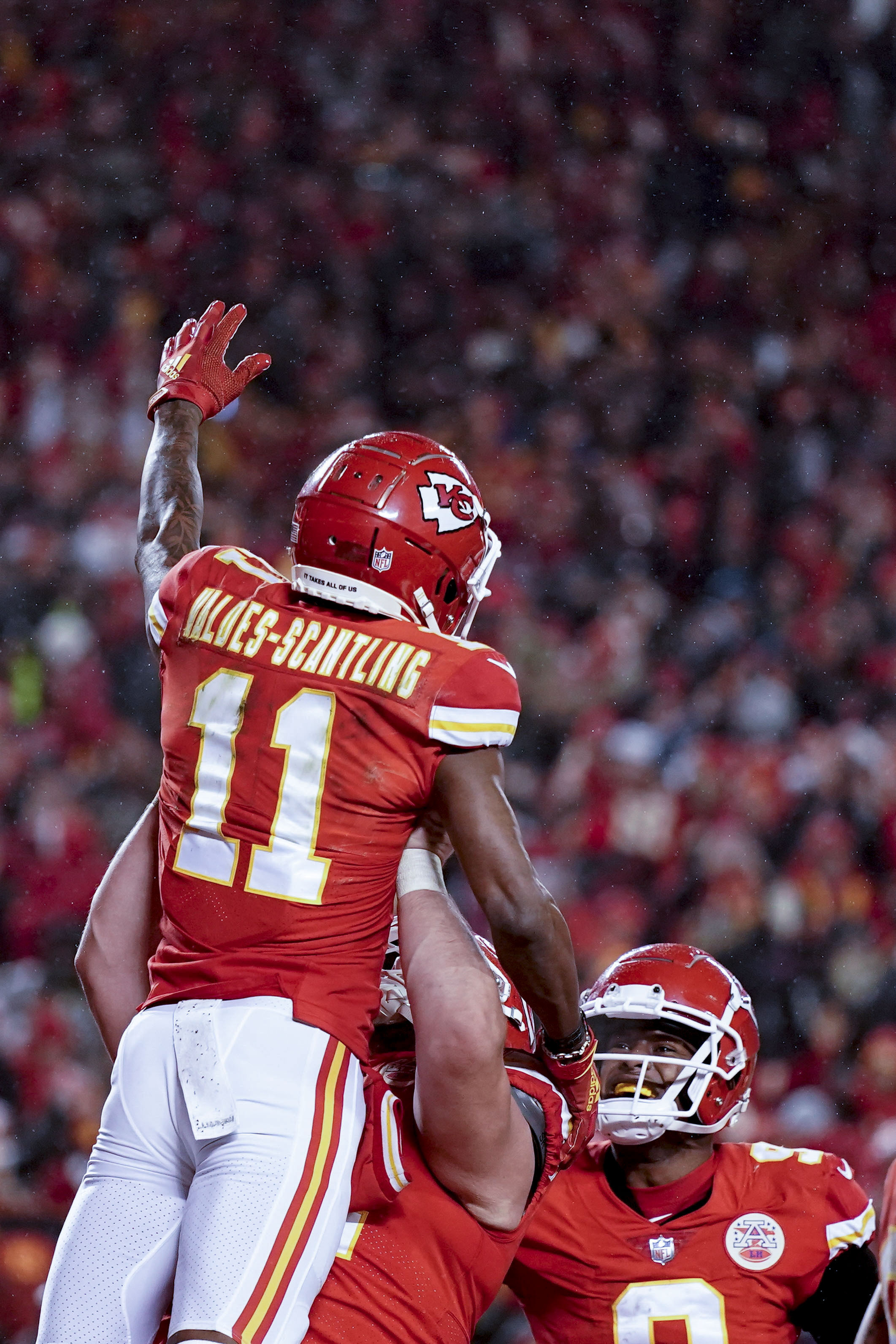