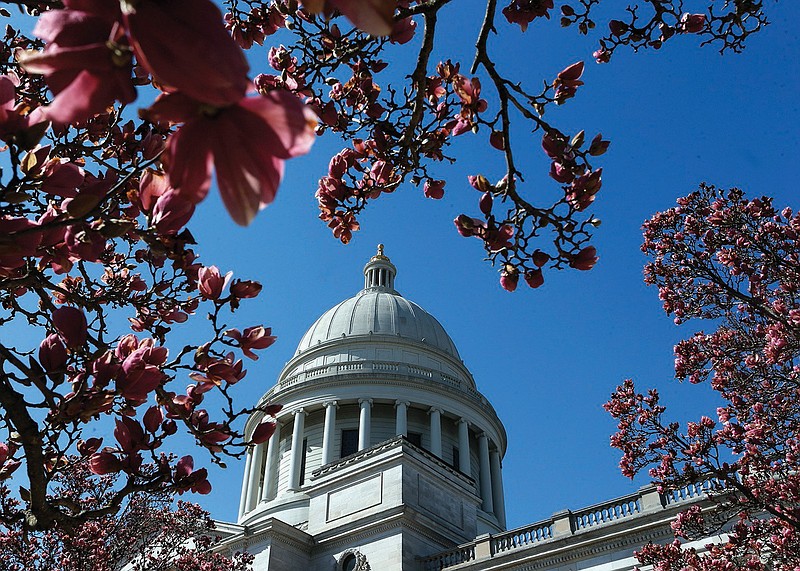 The Senate State Agencies and Governmental Affairs Committee on Tuesday advanced a bill requiring that all state and national flags purchased by a public entity with public funds in Arkansas be made and manufactured in the United States.

Fortner said there has been such an outpouring of support for the bill that it's unbelievable.

He previously told a House committee that flags given out to constituents were already made in the U.S. and that he was not involved in the production of flags.

The House Committee on Judiciary endorsed a bill on Tuesday that would bar certain registered sex offenders from purchasing, owning, possessing or operating unmanned aircraft for personal use.

Rep. Brian S. Evans, R-Cabot, said he sponsored House Bill 1125 after a family in his community had been "somewhat traumatized by this issue."

The proposed law would apply to level 3 and 4 offenders. The bill defines an "unmanned aircraft" as an aircraft "that is operated without the possibility of direct human intervention from within or on the aircraft and has the ability to photographically or electronically record."

The bill provides an exemption for professional use of unmanned aircraft for any sexual offenders who hold jobs that require them to fly drones.

In response to questions from committee members, Evans acknowledge the current language of the bill might allow sex offenders to work around the ban by creating their own company.

A violation of the proposed law would be a Class D felony.

The House Committee on Judiciary panel advanced a bill that would reduce the number of district courts in Crittenden County.

Rep. Milton Nicks, Jr., D-Marion, said House Bill 1165 was needed to eliminate a district court in Jennette that hasn't held court in more than 20 years. Statutes still required the court to schedule a meeting one day a month.

Nicks said he sponsored the legislation after the district court judge and the state Administrative Office of the Courts requested lawmakers delete the court in Jennette.

The proposed law would reduce the total number of district courts in the state's 21st District from seven to six.

The House approved a bill on Tuesday that would provide Arkansas residents an additional 30 days to register their motor vehicles.

Cavenaugh said she had resurrected the bill after it passed in the House but failed in the Senate during the 2021 regular session. The bill would not affect the state's sales tax on vehicles. Current state statues provide residents with 30 days to register their vehicles.

A bill that would allow a person who sought voluntary mental health services to obtain a concealed carry permit two years after the completion of their treatment advanced in the House.

Rep. DeAnn Vaught, R-Horatio, said she filed House Bill 1123 after hearing from a constituent who had requested mental health services and then was unable to carry a concealed firearm.

Current law only allows veterans who have sought mental health services to petition circuit courts for concealed carry permits two years after they complete their treatment.

House Bill 1098, sponsored by Rep. Julie Mayberry, R-Hensley, would require firefighters at volunteer departments with drop-off boxes for newborns to prove they could respond to a baby being placed in the box within at least four minutes.

The station would have to be located within one mile of emergency medical services. At least two firefighters from the department would have to monitor a video feed of the inside of the drop-off box for 24 hours a day. The box also must be connected to an alarm that alerts 911 when opened, Mayberry said.