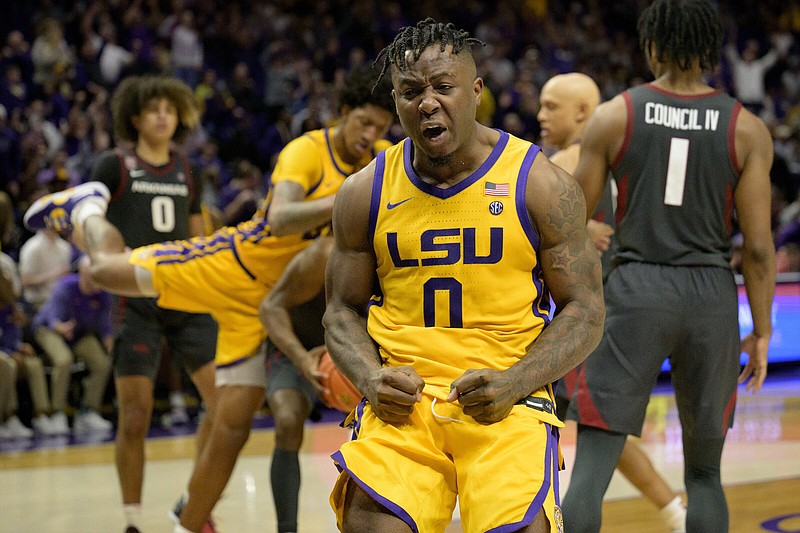 FAYETTEVILLE -- A month after the University of Arkansas basketball team lost at LSU 60-57 in the SEC opener, the Razorbacks will be out for payback tonight.

The Razorbacks, unranked for the first time this season, take on the Tigers at 6 p.m. in Walton Arena.

When Arkansas (13-6, 2-5 SEC) played the Tigers (12-7, 1-6) at the Maravich Assembly Center in Baton Rouge on Dec. 28, it was the Razorbacks' first road game of the season and the first SEC game for several newcomers.

"They kind of bullied us and tried to punk us that game," Arkansas freshman forward Jordan Walsh said. "We were on the road, people were nervous. We weren't ready. We weren't locked in.

"But now that it's home and now that we know what's up, it should be a different story."

LSU has lost six consecutive games since beating Arkansas. It's the Tigers' longest streak since they dropped the final 15 games of the 2016-17 season.

Since the Tigers lost at Kentucky 74-71 to fall to 1-1 in the SEC, their last five losses have been by 11 or more points -- the first time that's happened since the 1966-67 season when Pete Maravich was a freshman and not eligible to play for the varsity team.

"I think you have a team that is devastated right now," Matt McMahon, in his first season as the Tigers' coach, said after Tennessee won 77-56 at LSU on Saturday. "Not from today, but just the last couple of weeks and the totality of where we're at right now.

"And unfortunately, this is part of the process that we signed up for. I think you have to try to find some positives, as difficult as that is.

"Obviously, everyone wants to win. But we have to figure out a way to take some positives, from practices, from games, and try to build our program."

The Razorbacks beat Ole Miss 69-57 on Saturday in Walton Arena to break a four-game losing streak.

"There were a lot of Super Bowl signs up in the locker room," Arkansas Coach Eric Musselman said in his postgame news conference. "There's another Super Bowl on Tuesday.

"We have to play with a desperation mode."

Both teams had 10 turnovers, but the Tigers had a 13-4 edge in points off turnovers.

"I thought defensively we played well against LSU. Offensively, we've got to play better than what we did."

LSU senior forward KJ Williams, averaging 17.8 points, was held to 8 against Arkansas on 3-of-7 shooting and didn't attempt a free throw. But senior guard Trae Hannibal, who like Williams played at Murray State for McMahon and followed him to LSU, had 19 points off the bench against the Razorbacks and hit 9 of 14 shots.

Tigers point guard Justice Hill, a senior from Little Rock who transferred from Murray State, is expected to miss his third consecutive game for personal reasons.

"The game in Baton Rouge has nothing to do with how the next game unfolds from a style standpoint. Rosters are different, rotations are slightly different. So you've got to go into each game with adjustments."

LSU started 12-1, including a 72-70 victory over Wake Forest in Atlanta and a 61-59 loss in the Cayman Islands to Kansas State, which is ranked No. 5 in this week's Associated Press poll.

"Non-conference, it was what it was, but now we're here," Hannibal said after the Tennessee game. "We can't look back and dwell on anything. We just have to prepare for Arkansas at this point and put it behind us."

Junior guard Davonte Davis is the Razorbacks' most experienced player in terms of SEC games. He led Arkansas with 16 points at LSU in this season's first meeting and is 4-3 against the Tigers.

"It's going to be a dog fight," Davis said of tonight's game. "Hopefully they come and be ready to play and be ready for war.

"Because we're going to come ready. That's all I can say."