Jimenez prepared to play OF for Sox 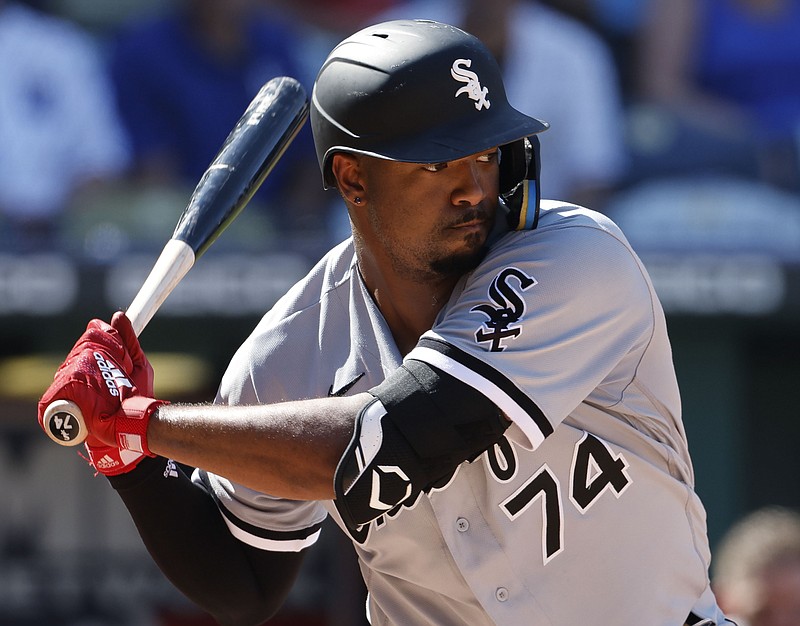 FILE - Chicago White Sox's Eloy Jimenez prepares to hit during a baseball game against the Kansas City Royals in Kansas City, Mo., Aug. 11, 2022. It looks as if Jimenez could spend a lot of time at designated hitter this year but he has other plans. (AP Photo/Colin E. Braley, File)

CHICAGO -- It looks as if Chicago White Sox slugger Eloy Jimenez could spend a lot of time at designated hitter this year.

Jimenez himself has other plans.

Jimenez, 26, said Monday he is preparing to play more games in the outfield, especially in right after Chicago signed Andrew Benintendi (Arkansas Razorbacks) to a $75 million, five-year contract. The White Sox also have Luis Robert in center, to go along with Gavin Sheets and prized prospect Oscar Colas in the mix in right.

Jimenez was sidelined for a couple months last season after he had surgery in April to repair a torn hamstring tendon behind his right knee. He returned in July and finished with a career-high 50 starts at DH -- not exactly his favorite opening in the lineup.

Asked if he would embrace the DH role this year, Jimenez responded: "I don't know."

"Last year, when I was DH'ing more than [playing] the outfield, it was because I got surgery. And I understand that," he said. "But this year, I've been working really hard to play the outfield more than DH. So I don't really think that I'm going to accept it, because if I'm working hard, I'm going to get better, and I want to play in the outfield."

Jimenez has been a bit of an adventure in the outfield since he made his major league debut with Chicago in 2019. He missed the start of the 2021 season after he ruptured his left pectoral tendon trying to make a defensive play during an exhibition game.

But he remains a force at the plate, and there is no questioning his importance to the White Sox.

Chicago went 81-81 in 2022 and missed the playoffs after reaching the postseason in the previous two years.

"We just need to be healthy, that's the key right now," Jimenez said. "If we're healthy, we can do whatever because we are good on paper. But if we don't play together as a team because of the injuries, we're not going to do it, you know? We're not going to make it."

Jimenez said he has had "good communication" with Pedro Grifol since he took over as White Sox manager in November. Asked about his offseason conditioning, Jimenez playfully brushed off the question.

"I'm going to give you a surprise. I'm not going to answer right now," said Jimenez, who plans to play for his native Dominican Republic in the World Baseball Classic. "You're going to see me in spring training."

Left field was Jimenez's only defensive position in his first four years in the majors, making 235 starts at the spot among 316 big league games. But Benintendi has spent most of his career in left, winning a Gold Glove in 2021 with Kansas City.

So Jimenez and Grifol have talked about playing right, but the 24-year-old Colas is expected to get a long look at the position in spring training after he batted .314 with 23 homers last year in the minors.

Still, Jimenez has focused at least some of his work on learning how to play right.

In addition to the new position, Jimenez also is preparing for his first season without Jose Abreu after the first baseman left Chicago for a $58.5 million, three-year contract with Houston in free agency.

Abreu has been a key figure in Jimenez's career.

"It's going to be a little bit weird but this is the business," Jimenez said. "We need to move forward and play with what we have."

Print Headline: Jimenez prepared to play OF for Sox