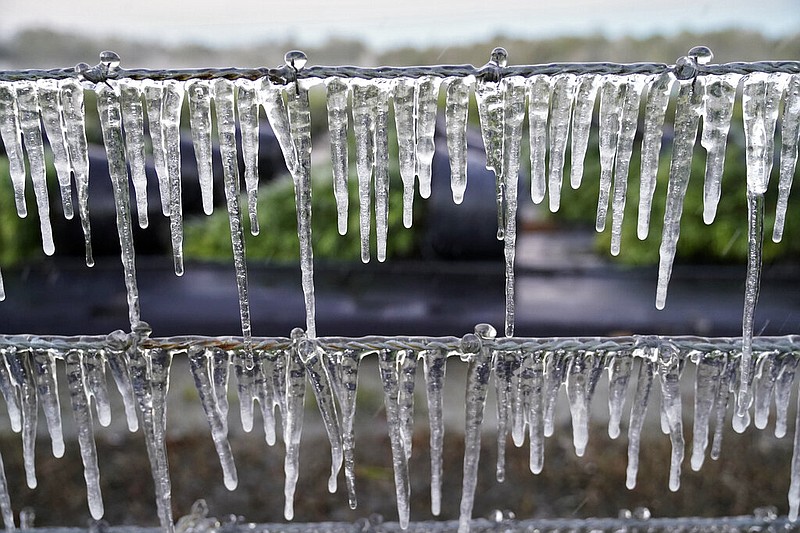 An advisory from the Arkansas National Guard said the unit was activated starting at noon Tuesday and will remain on duty until road conditions improve and the Arkansas State Police determines support is no longer needed.

The national guard is positioned to offer additional support to trooper units in northwest and north-central Arkansas and the river valley as conditions warrant.

That role would be filled by members of the 39th Infantry Brigade Combat Team, 87th Troop Command, 142nd Field Artillery Brigade, or the 189th Airlift Wing, depending on which trooper requires support.

A winter weather support team consists of one commissioned officer and four Guardsmen, and a Humvee with communications equipment.

The unit will operate around the clock until no longer needed. Each team will travel state police designated roads to assist motorists and help motorists to safety. Teams are not authorized to recover privately owned or commercial vehicles. If the need arises, teams are permitted to recover first responder emergency vehicles to a safe area if they are able to do so.

Travel conditions have been getting worse over western and northern parts of Arkansas, where a winter storm warning is in effect until 6 a.m. Wednesday, according to forecasters.

Arkansans should consider sharing their travel plans with friends or family, ensure they have gas and properly inflated tires with adequate tread, pack an emergency supply kit and charge their phones before traveling,  the weather service said in a tweet just before 3 p.m. on Tuesday.

Other areas adjacent to the warning areas are under a winter weather advisory, while the rest of the state is under a wind advisory, the weather service said.

Areas under the winter weather advisory are expected to encounter winter precipitation but with lesser impacts expected compared to those areas under the warning, the briefing said.

The wind advisory was issued for parts of northeast, central and southern Arkansas.

The southeastern half of Arkansas is predicted to have sustained gusts of winds around 20 to 30 mph and gusts as strong as 40 mph, the weather service said.

The weather is already taking a toll on roadways.

The state Department of Transportation's IDriveArkansas shows that parts of U.S. 71 in Polk and Scott County were covered in snow, along with U.S. 270 in Scott County, as of around 1 p.m.

The weather has also affected some events and school days in the state.

“The safety of our students and staff are a top priority. It is our hope that the early dismissal will allow everyone to get home ahead of the inclement weather,” the district said on Facebook.

An Arkansas Heritage Grant presentation, originally scheduled for Wednesday afternoon, has also been postponed due to inclement weather, officials said in a news release on Tuesday morning.

The Small Museum Grant presentation that was scheduled for Wednesday morning has been postponed as well, until further notice, due to the winter weather, a news release said Tuesday.

While Pulaski County could see snow that doesn't accumulate and Little Rock could see mostly rain, forecasters with the National Weather Service said snow in west and Northwest Arkansas could have a larger impact on travel today and Wednesday.

"Wet and heavy snow is expected with this system, leading to rapidly deteriorating road conditions, making travel extremely hazardous across much of northwestern and western Arkansas Tuesday night," a briefing from the weather service said Monday.

"Let the snowplows do their job and stay off the roads," said Travis Shelton, a meteorologist with the weather service in North Little Rock.

However, if travel is impacted in Pulaski County, it will be temporary, he said. The meteorologist said Pulaski County temperatures will be around 32 degrees, but any snow that may fall there is not expected to accumulate.

Shelton said that area is then expected to see temperatures warm to the 40s, "so anything that freezes will melt and it isn't expected to refreeze."

A winter storm warning has been issued for much of west, Northwest and north-Central Arkansas from this afternoon through early Wednesday morning, according to the weather service. A winter weather advisory has also been issued for counties adjacent to the areas covered by the warning.

The weather service's Tulsa office said nearly a foot of snow is possible in the higher terrain of Northwest Arkansas. Their meteorologist, Pete Snyder, said the Fort Smith area could see 3 to 5 inches of snow.

"It will be a heavy, wet snow, but it won't be around for too long," he said. The Tulsa office has also predicted winds that could reach 20 mph.

The higher terrain of the Boston Mountains could see 8-10 inches or more of snow, according to the national weather service.

Forecasters with the weather service in North Little Rock are predicting anywhere from 4 to 8 inches of snow in north and Northwest Arkansas, Shelton said Monday morning.

Western Arkansas could see 4-6 inches of snow with more than that likely in the higher terrain of the Ouachita Mountains, the weather service said Monday afternoon.

The snow could create "dangerous travel conditions," briefings from the weather service warned.

Those mountains and parts of western Arkansas could see the rain and snow as early as Tuesday morning, the Monday morning briefing said.

Northern parts of the state could see snow as early as Tuesday afternoon and are expected to see it until early Wednesday, forecasters said.

Ahead of the snow, at least one major utility has been preparing for power outages.

Brandi Hinkle, a spokesperson for Entergy, said Monday that the utility has had many conversations about it. "And we are mobilizing so we will be ready when the weather hits," she said.

Hinkle said Entergy has been moving crews and equipment to areas where they may be needed.

"We've got people up there to help watch for if power lines break from heavy snow, or if the snow breaks tree limbs and they fall and damage power lines," Hinkle said. "We expect outages, but we are working on making sure we can handle them as best we can."

Entergy recommends that customers in areas expected to see snow insulate their doors and windows, collect flashlights and candles and charge devices like cellphones.

"We also recommend that if you can, stay home. Staying off the roads means that emergency personnel and our crews can get out where they need to be faster and safer," Hinkle said.

Also preparing for the snow is the Benton County Road Department. The department spent Monday getting equipment in place, said Jay Frasier, administrator of Public Services.

The county won't be able to do much pretreatment of roads because rain will wash it away, he said, but grit will be put down on bridges if there isn't too much rain.

The Arkansas Department of Transportation also has plans in place to prep roadways in Central Arkansas ahead of the storm.

A department spokesperson said it will likely treat high-elevation areas, including bridges and overpasses, in areas northwest of Interstate 30.

The parts of Arkansas that are not expected to see snow will likely see rain Tuesday and Wednesday, said Shelton, the North Little Rock meteorologist.

Southern parts of the state can expect an inch to 2 inches of rain, and central and eastern Arkansas could see up to an inch and a quarter of rain, he said.

In Northwest Arkansas, the snow should taper off Wednesday morning, when the high is expected to be 36 degrees, according to the weather service.