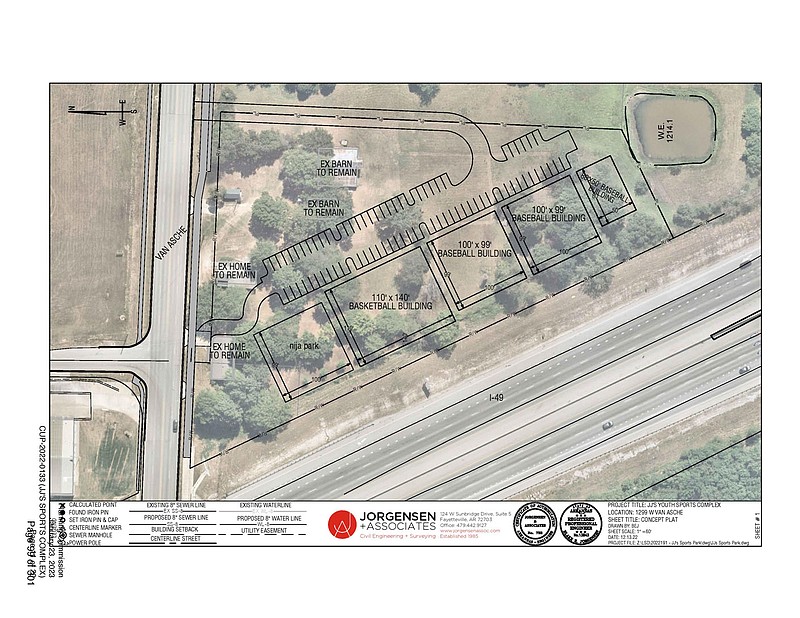 A drawing shows the proposed layout for JJ's Sports Complex on Van Asche Drive in Fayetteville. The city's Planning Commission on Monday reviewed a conditional land use permit for the proposed development. (Courtesy/Fayetteville)

FAYETTEVILLE -- Development of a youth sports complex on the northern side of town cleared an initial hurdle Monday.

The complex is planned on about 4 acres of agricultural land southeast of Van Asche Drive and Interstate 49 near the Johnson border. The property sits about a mile west of JJ's Live and is owned by Jody Thornton, owner of a number of JJ's restaurants in the region.

In a letter to city planners, Blake Jorgensen with Jorgensen + Associates, the engineering firm on the project, said the sports complex seeks to become Northwest Arkansas' hub for competitive sports training for athletes of all ages. The plan is to have five separate buildings comprising the complex, according to city documents.

A conceptual plan of the complex was provided to planners. City staff cited potential issues with the way driveways were shown on the property, but those specifics would be addressed at a later stage of the development process.

Jorgensen presented the proposal to the commission and said the development team would address any outstanding issues. He said the final plans will be more advanced than what the commission saw Monday.

The complex will serve a need for many parents who hire former college players to train their children, Jorgensen said.

Commissioner Andrew Brink said several new residences are in development in the area and the proposal seemed compatible with its surroundings.

Commissioner Matt Johnson said he didn't love the proposed design of the buildings or their placement but praised the opportunity for amenities in a growing part of town.

In other business, the commission voted 8-0 to forward to the City Council a rezoning request for two properties totaling 7.7 acres on the east and west sides of Bob Youngkin Drive, east of Gregg Avenue and Drake Street. Both properties are zoned for residential and office use. The west side property would be rezoned for community services while the east side property would be rezoned for residential multifamily up to 24 units an acre. The City Council will have final say on the request.

Tim Brisiel with Legacy Ventures presented the request to the commission and said the plan was to build multifamily residential units for residents 55 and older. The proposed project would provide a variety of housing options for older residents close to Washington Regional Medical Center and other medical facilities in the area, he said.

Six neighbors from a nearby subdivision expressed concerns about the rezoning, citing potential issues with traffic and drainage.

Commission Chairwoman Sarah Sparkman said she lives in the area and the potential addition of walkable community services could be a benefit to the neighborhood.

• Rezoning half an acre at the southwest corner of Old Farmington and One Mile roads from residential single-family up to 4 units an acre to allowing up to 18 units an acre. The City Council will have final say on the request.

• A variance to city code for the placement of street trees installed in front of a townhome development on Hill Avenue downtown.