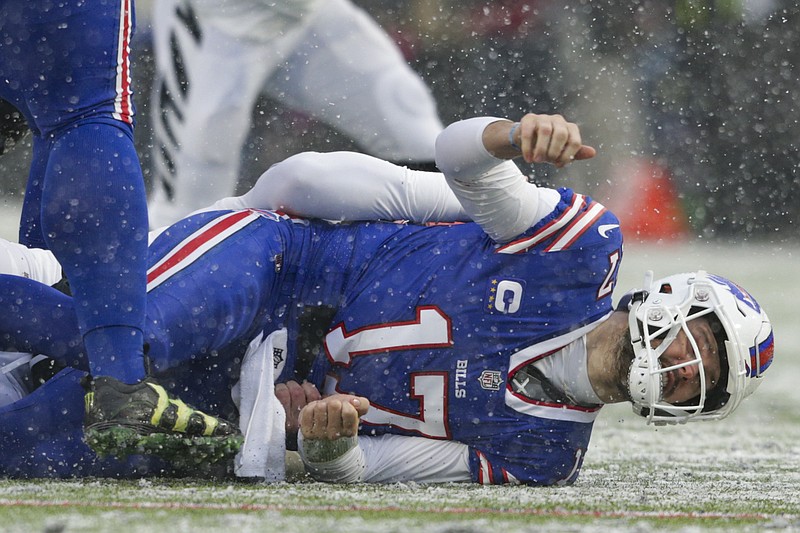 Buffalo Bills quarterback Josh Allen (17) takes a hit after making a pass against the Cincinnati Bengals during the first quarter of an NFL division round football game, Sunday, Jan. 22, 2023, in Orchard Park, N.Y. (AP Photo/Joshua Bessex)

ORCHARD PARK, N.Y. -- Sitting glumly at a table inside the Buffalo Bills' practice facility on Monday, quarterback Josh Allen had difficulty coming to grips with how much his team accomplished and overcame, only to wind up no closer to the Super Bowl.

More troubling for Allen and the Bills -- a day after they were throttled 27-10 by the Cincinnati Bengals in the divisional round of the playoffs -- is the prospect that they took a step back.

"Recency bias from this last game, I know everybody's going to lose their minds, but we did a lot of good things this year," Allen said.

Yet after Buffalo matched a franchise record with 13 wins, won a third consecutive AFC East title and finished a half-game behind top-seeded Kansas City, Allen still finished the season with a feeling of being, as he put it, "sick to my stomach."

"It [stinks] feeling like you're close and not being able to accomplish it," he added. "It's been the last three years with a very similar feeling. We've got to continue to push forward and find a way to get over this hump."

It could well be humps, plural, now for Buffalo.

The Bills made it to the AFC Championship Game after the 2020 season, losing at Kansas City. Last year, they fell again on the road to the Chiefs, this time in the divisional round. Now, Buffalo finds itself overtaken by Joe Burrow and the Bengals in the AFC's pecking order.

Unlike a year ago, when Allen went toe-to-toe with Patrick Mahomes and Buffalo squandered a three-point lead in the final seconds of a gripping 42-36 overtime loss, the Bills let the Bengals take a 14-0 lead in the first quarter and responded meekly.

The Bengals exposed Buffalo's many weaknesses. Among them: An a injury-depleted defensive front missing Von Miller, a young and banged-up secondary and an offense overly reliant on Allen and Stefon Diggs.

"I'm a big believer in who you are in the last game of the season, in terms of what you saw on the field. And that's what you have to address. And so obviously, we weren't good enough yesterday," Coach Sean McDermott said, while acknowledging the gap between the Bills and the AFC's elite has narrowed in a conference stocked with quarterback talent.

"That's also why and the reason why we must continue to grow, and we have to answer that question of can we compete at that level," McDermott said. "Can we handle those quarterbacks? And who must we have to help us do that?"

The Bills will need to retool while having little salary cap space and a roster that features 21 players eligible to become unrestricted free agents. That group includes middle linebacker Tremaine Edmunds, starting safety Jordan Poyer and running back Devin Singletary.

Singletary was so stunned by Buffalo's loss that he said he's given no thought to his future.

"To be honest, I didn't think the season was going to be over, so I thought I still had time to think about it," the fourth-year player said.

Offensive lineman Rodger Saffold acknowledged the Bills were emotionally spent following a season in which their schedule was twice disrupted by winter storms and their game at Cincinnati on Jan. 2 was canceled when safety Damar Hamlin went into cardiac arrest and had to be resuscitated on the field.

"We haven't been able to take a breath since the Damar situation, and it's been really weighing heavy on a lot of people," Saffold said, noting that it finally caught up to the team on Sunday. "It was almost like being in quicksand, like the harder that you fought, the deeper that you sank."

Hamlin was healthy enough to attend the game and visit the locker room on Sunday.

Running back Duke Johnson took it upon himself to chase down a frustrated Diggs, who bolted from the locker room immediately following the loss and before McDermott had a chance to address the team. Johnson persuaded Diggs to return.

"I think Diggs needs more credit than I do because Diggs didn't have to listen to me," Johnson said.

"He's frustrated like we all are," McDermott said. "He was in today. He and I spoke, and I'll leave it at that."

Diggs did not make himself available to the media. However, he tweeted: "Want me to be okay with our level of play when it's not up to the standard? Nah." 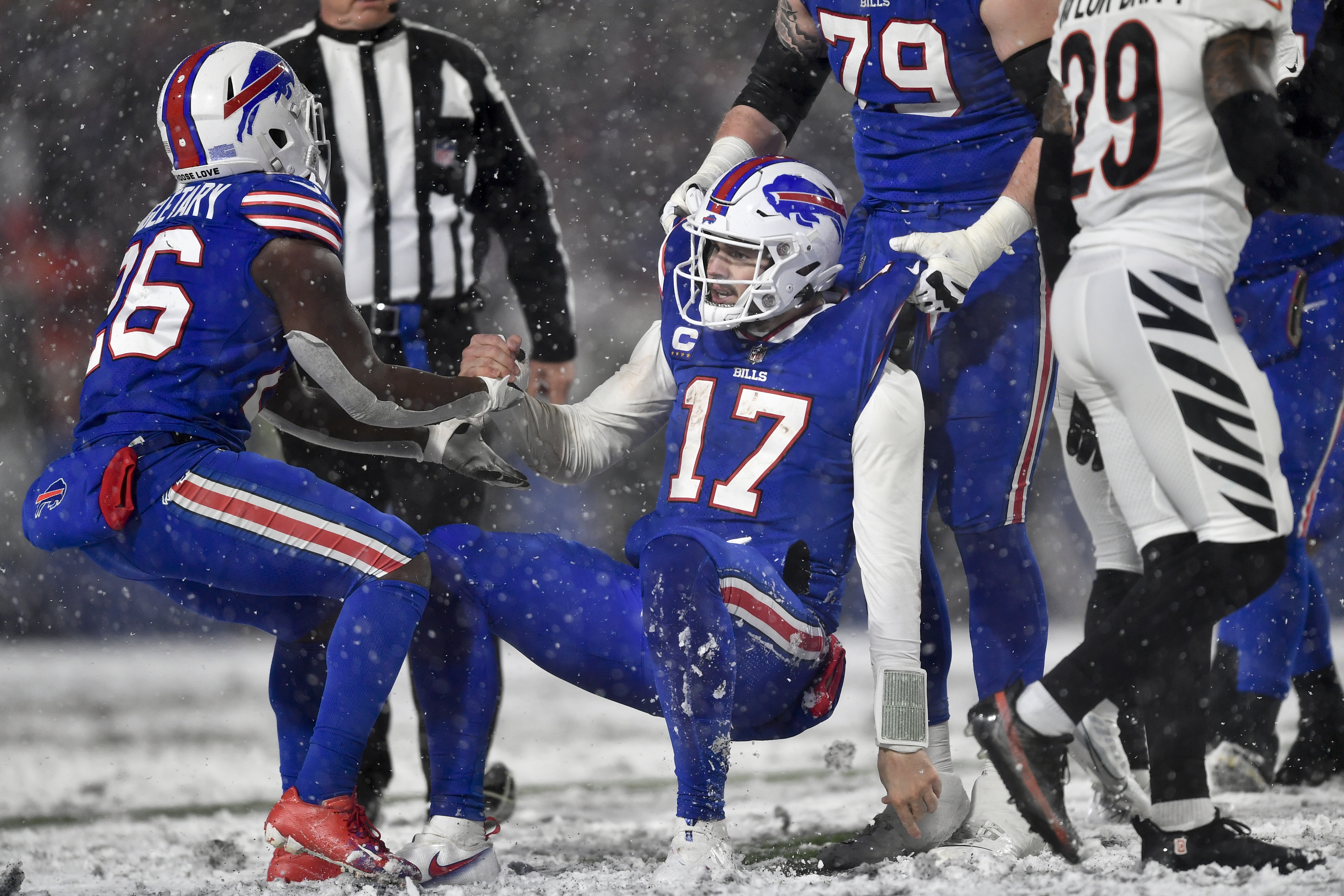 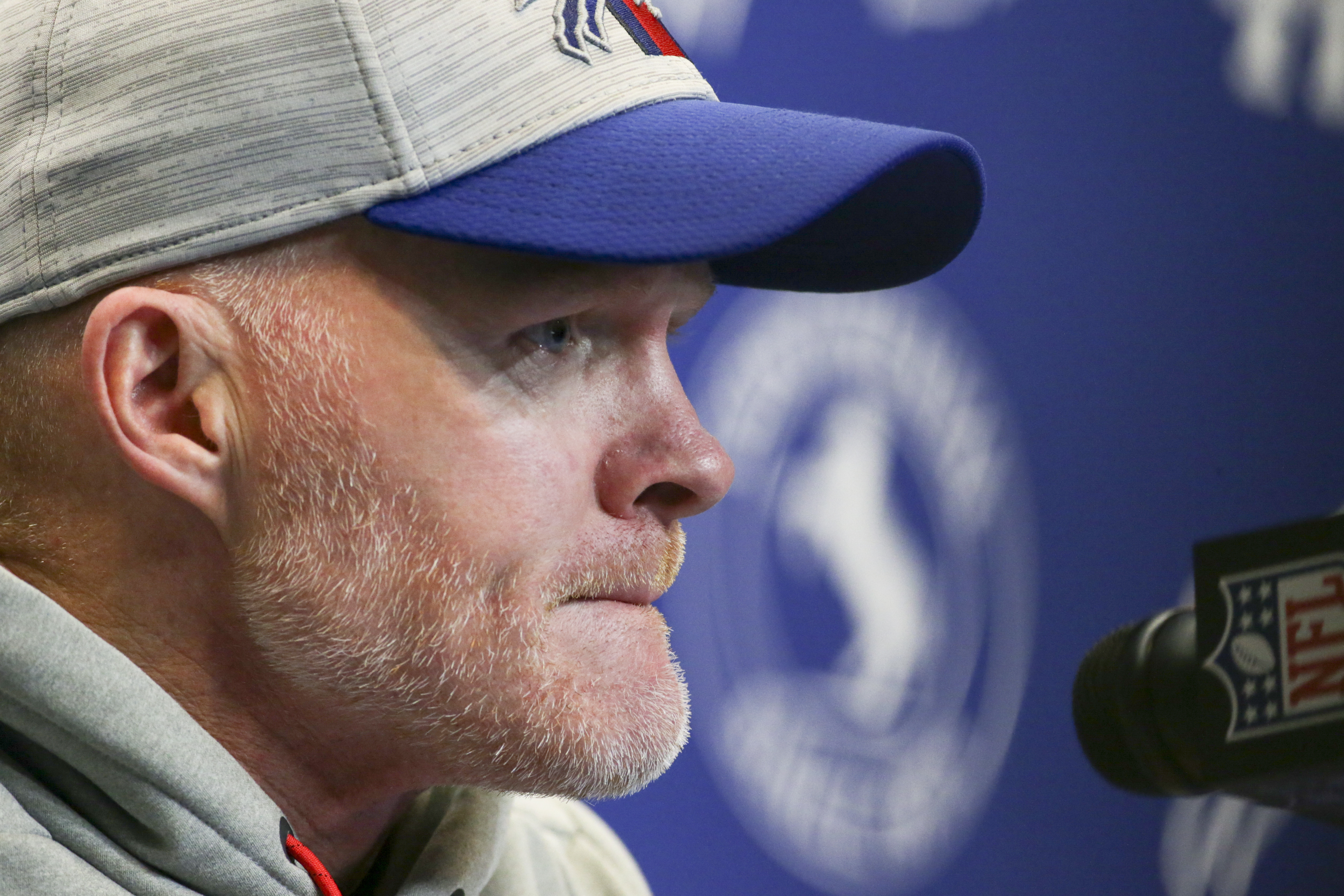 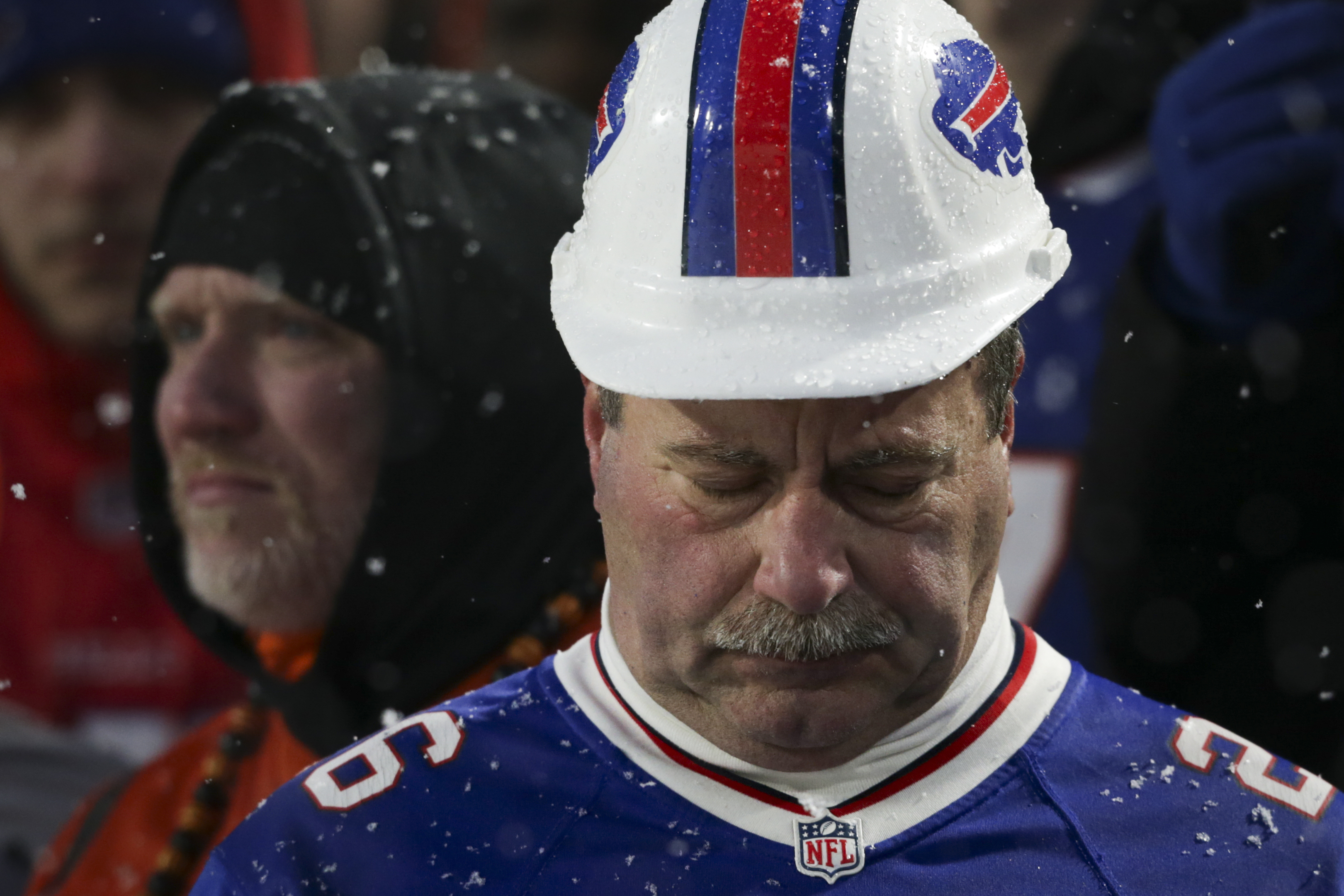 A Buffalo Bills fan reacts during the fourth quarter of an NFL division round football game against the Cincinnati Bengals, Sunday, Jan. 22, 2023, in Orchard Park, N.Y. (AP Photo/Joshua Bessex) 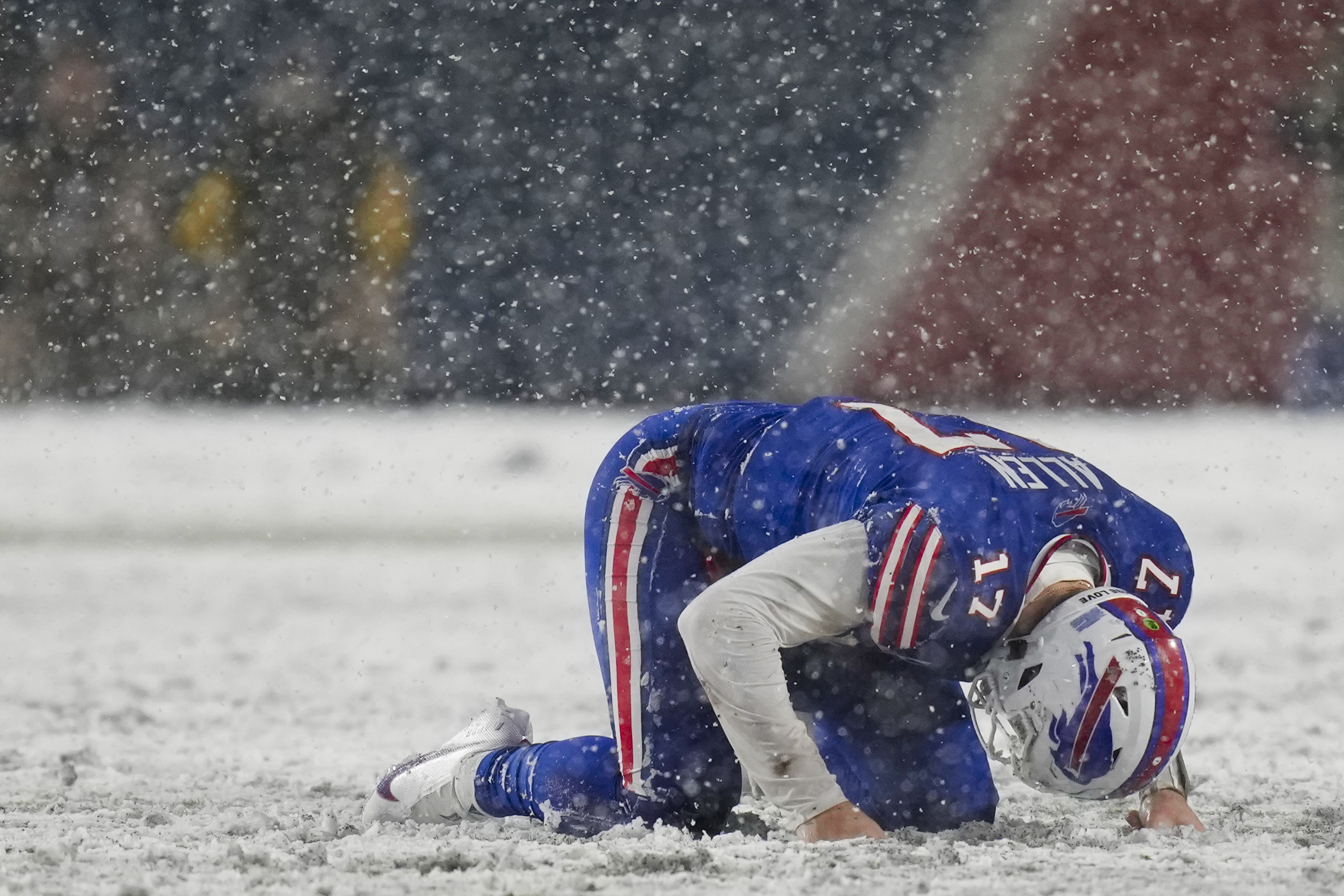 Buffalo Bills quarterback Josh Allen (17) reacts after being sacked by the Cincinnati Bengals during the fourth quarter of an NFL division round football game, Sunday, Jan. 22, 2023, in Orchard Park, N.Y. (AP Photo/Seth Wenig)