100 years ago in Arkansas, 1,000-man mob crushed a railroad strike at Harrison 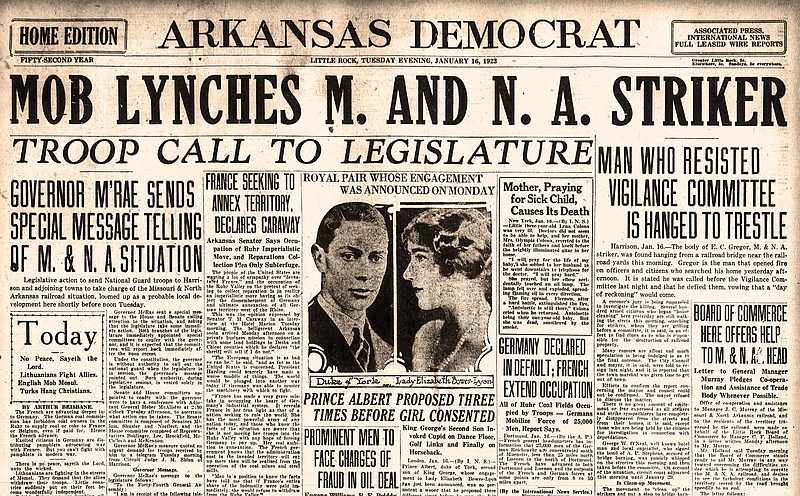 Page 1 of the Jan. 16, 1923, Arkansas Democrat reports the lynching of Ed Gregor by a mob assembled to suppress a strike against the Missouri & North Arkansas line. (Democrat-Gazette archives)

On Jan. 15, 1923, after a bitter 2-year strike on the Missouri & North Arkansas Railroad, an angry mob assembled in Harrison, the railway's headquarters. The vigilantes hanged one striker, publicly stripped and whipped others and ran the remaining strikers out of Arkansas. One of the longest railroad strikes in American history, it was the only one ended by a mob action.

The Missouri and North Arkansas Railroad (M&NA) had begun in the 1880s as a 15-mile spur to connect Eureka Springs to the Frisco line, in Seligman, Mo., so that tourists could travel by rail to the new spa town of the Arkansas Ozarks. In 1899, a group of mostly St. Louis investors decided to extend the line from Eureka Springs to Harrison to the east and then south through the mountains to Leslie, Heber Springs and Searcy.

Just past Searcy at Kensett, the M&NA intersected with the Missouri Pacific Railroad, which connected Little Rock to St. Louis. The construction continued through the Delta flatlands to Helena on the Mississippi River. By 1909, the M&NA extended 360 miles from Joplin, Mo., to Helena.

The company placed its headquarters and main shops in Harrison.

In the 1910s, the M&NA quickly became the lifeblood of the economy of this stretch of the Arkansas Ozarks. The state's most inaccessible region suddenly had easy connections with the rest of the country. Businesses opened to exploit the natural resources that now could be shipped to market. Timber products in the Ozarks became a cash cow. The H.D. Williams Cooperage Co., in the boom town of Leslie, for example, claimed to be the largest manufacturer of barrel staves in the world.

Local entrepreneurs established peach and apple orchards and planted fields of strawberries. During World War I, zinc mines in Boone, Searcy and Marion counties could ship the valuable war material by rail. Towns along the line flourished as centers of trade.

The contraction of the economy after the war and the end of wartime federal controls over railroads put pressure on railways nationwide. But the M&NA was especially challenged. Steep grades and sharp turns through the Ozarks made the M&NA less profitable than other railroads. At the end of 1920, the railroad's management announced a 20% wage cut to take effect on Feb. 1, 1921.

The strike of the railroad's union employees began that day. Nobody expected it would last two years and so bitterly divide the communities along the line.

Angry strikers burned some railroad bridges and committed other acts of sabotage that shut down the line until repairs could be made. By the end of summer 1921, the railroad suspended operations for eight months.

With no trains running, fruit rotted in the fields, and wood products piled up alongside the rails.

In May 1922, a $3 million loan from the federal government enabled the M&NA to resume service. But with strikebreakers back to work, vandalism against railroad property commenced again.

Citizens in towns along the line organized "protective leagues" that guarded railroad property, but they could never catch anyone red-handed.

Finally, in January 1923, the railroad had had enough. M&NA managers called on the protective leagues to assemble a force of 1,000 men in Harrison, where the largest number of strikers lived, to end the strike once and for all.

On Monday, Jan. 15, a special M&NA train brought men from Heber Springs, Leslie, Marshall and other points down the line to join men from Eureka Springs, Berryville, Jasper and Green Forest who came by car or wagon.

The angry crowd organized a Committee of Twelve, which set up shop in the Rotary Club Hall, across the street from the M&NA office on one side and the Boone County Courthouse on the other. Squads spread out through town, forcibly brought strikers before the committee, and searched their homes, all without arrest or search warrants.

A mob ransacked the union hall, on the east side of the courthouse square, bringing out papers and furniture for an enormous bonfire in the middle of the street.

The Committee of Twelve interrogated the strikers, ultimately giving them the choice of tearing up their union cards or leaving the state.

Some were detained in a small room at the rear of the hall for further questioning or punishment. After nightfall, three masked men burst into the hall and took out one of the strikers, Ed Gregor. Gregor was the only striker who had forcefully resisted when the mob tried to take him from his home.

In the early hours of Tuesday, Jan. 16, Gregor was hanged from the railroad bridge crossing Crooked Creek on the south side of town. Others, some who were merely sympathetic to the strike, were taken from their homes and flogged.

After a few days, all the strikers had fled, most to Missouri and other states, leaving behind their possessions, homes and families. Wives were forced to sell houses and possessions for pennies on a dollar and then join their husbands.

Some members of the Harrison mob returned home and as so-called citizens committees reprised the kangaroo courts in Leslie and Heber Springs, whipping strikers and sympathizers with a 4-inch leather strap on their bare buttocks, and drove out the strikers who would not repudiate the union.

Strikers in other towns along the line, hearing what had happened, fled before they could be expelled.

Thus ended the strike on the M&NA.

The men who formed the mob were mostly business and professional men, such as merchants, lawyers, physicians, teachers and clergymen. A Baptist preacher applied the lash in Harrison and Leslie. These citizens believed that extra-legal actions were necessary to rescue the railroad and save their towns.

Many of these men were dues-paying members of Ku Klux Klan chapters that had been organized the year before in Eureka Springs, Berryville, Harrison, Marshall, Leslie, and Heber Springs. The leader of the Harrison mob was an orchardist in the employ of the M&NA who became the Exalted Cyclops of the Harrison Klan No. 101.

The Cleburne County judge and the mayor of Heber Springs were officers of the Heber Springs Klan No. 126, and both served on the vigilante committee that expelled strikers and sympathizers. The Klan organization probably explains how a thousand-member mob could assemble at a specific time in Harrison in an era without cellphones or social media.

Newspapers from Maine to California carried headlines about the lawless mob in Arkansas. The president of the American Federation of Labor, Samuel Gompers, and the director of the ACLU appealed to Arkansas Gov. Thomas C. McRae, begging the state to investigate the mob violence and mete out justice to the offenders.

The General Assembly was in session in Little Rock. McRae asked the Legislature to appoint a special joint committee to investigate the violence associated with the strike. Over the next two months, the committee took testimony in the Marion Hotel in Little Rock and at the Boone County Courthouse in Harrison. It presented its report to McRae on May 6.

The author of the committee's report was Neill Bohlinger, who had won his seat as representative for Pulaski County by running as an avowed Klansman. Critics at the time alleged that all seven members of the legislative committee were members of the Ku Klux Klan.

In the same legislative session, Bohlinger proposed the bill that revised the state flag to add a star representing the Confederate States of America. A second Bohlinger bill then placed the Confederate star above the one that represents the United States. Bohlinger's revisions give us the current flag of Arkansas.

The legislative committee's report held no one accountable for the lawless violence and recommended no actions.

Some in the public, and even one member of the committee, declared the report a whitewash. McRae accepted the report and let the matter of mob violence with the M&NA strike drop.

More than a decade later, the railroad named one of its new motorcars, a Streamliner No. 705, the Thomas C. McRae.

Kenneth C. Barnes is a retired professor of history at the University of Central Arkansas and the author of several books on Arkansas history. His forthcoming book, "A Railroad War in the Ozarks: The Missouri and North Arkansas Railway Strike, 1921-1923," is under contract with the University of Arkansas Press.