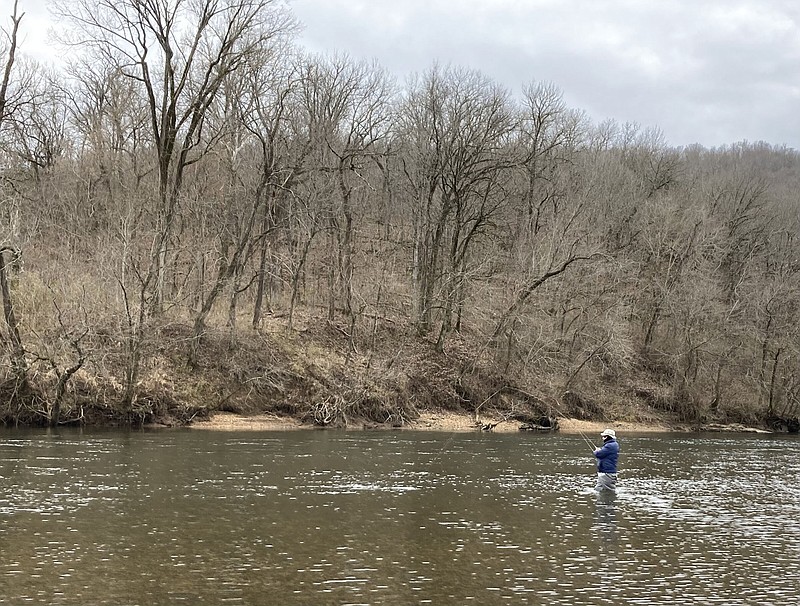 Rusty Pruitt of Bryant fly fishes Jan. 15 on the White River. Pruitt, Brad Conley of Rogers and the author fished the river with Bill Eldridge and Ed Kubler, both of Benton, and the trip exceeded all expectations. (Arkansas Democrat-Gazette/ Bryan Hendricks)

It's an unusual day to catch trout in the Buffalo River and smallmouth bass in the White River.

It happened Jan. 15 during an annual January trout fishing trip on the White River with Bill Eldridge and Ed Kubler, both of Benton, Rusty Pruitt of Bryant and a featured guest, Brad Conley of Rogers. It begins what we hope will be a year's worth of fabulous fishing around the Natural State. Not every trip meets expectations, but the January White River trip always exceeds them, and this year's edition held form.

Our normal headquarters is the White Buffalo Resort, on the north bank of the White River a few hundred yards upstream from its confluence with the Buffalo River. After checking into into our cabin, we boarded our johnboats whose 9.9-horsepower Mercury outboards were already running. Matthew Leiboult, owner of White Buffalo Resort, gave us a brief tutorial about how to operate the motors and then sent us on our way.

Conley, who I've known since 1975, abandoned an annual waterfowl hunting trip to participate in this adventure. In a flurry of text messages leading up to the trip, Conley asked about our fishing tactics.

"It's pretty simple," I responded. "We troll stickbaits up the river real slow."

Conley texted me a photo of an entire sporting goods store worth of stickbaits.

"Will this be enough?" he asked.

I contacted Pruitt, my constant fishing partner, and told him that no matter what, Conley would ride in our boat.

We made a short run past the Buffalo City public access area until we reached a spot I know by heart.

"This is the beginning of the fish water," I said, chunking a stickbait far behind the boat.

"How do you know?" Conley asked. "How can you tell this is good water?"

"By the way it looks," I said. "See how dark it is compared to the water around it? Mostly because we've been fishing here so long."

We caught fish immediately. Conley's first fish was a 14-inch brown trout. We thought it portended greatness, but it was one of only two browns for the entire trip. Conley caught the other one, as well, a strapping 17-incher with broad shoulders.

The rainbows were pretty brawny, too, with very dark complexions that made their rainbow markings look incandescent. Their flaming gill plates made us wonder if they were actually cutbows.

After priming the pump with those fish, we gingerly picked a tenuous path through Buffalo Shoals to head upstream to my most dependable big fish area. I caught a 28-inch brown trout there last January, and I dearly wanted Conley to catch a big one there, too. Unfortunately, the low water left my best spots almost dry. We made a couple of passes to the outside of the usual big fish cover and continued upstream to Shoestring Shoal.

"That's a classic case of leaving fish to find fish," I said. "I had to look, but we won't be coming back here."

We dined that night on our usual feast of hubcap size ribeye steaks steeped for days in Kubler's secret marinade along with corn on the cob and baked potatoes.

On Sunday we started fishing at about 9 a.m. We cast our lines about 100 yards upstream from the mouth of the Buffalo River. Rainbows jumped on all three of our lures immediately, and we landed a rare triple. We caught many others and then entered the Buffalo, where the National Park Service limits outboard motors to 9.9 horsepower. We caught a mess of rainbows along the edge of the gravel lip that separates the Buffalo from the White, and then we caught a bunch more trolling the deep hole along the west bank.

When that bite exhausted, we re-entered the White and hooked a second triple. After that spot exhausted, we went upstream to the area below Buffalo Shoals. There we found Eldridge and Kubler tied to a big rock. They were catching fish on Royal Coachman dry flies retrieved slowly behind clear bobbers.

During lull periods when I tended to fouled lines or changed lures, Pruitt used his fly rig to cast a flashback nymph. His fly fishing periods were brief but productive.

Trolling from the bow of the boat made it difficult for Pruitt to negotiate sharp turns. Several times his line snagged in the propeller and broke off. Whenever that happened, I beached the boat, tilted the motor and unwrapped the line from the prop. Once free of the prop, I reeled the broken line in hand over hand. On two occasions not only did I save Pruitt's lure, but there were also trout on the line.

Farther upstream, we passed a bald eagle perched in a tree. Conley hooked a small rainbow trout and reeled it in swiftly, causing it to ski along the surface. The eagle launched out of the tree swooped low and hovered over the skimming trout for several seconds before aborting its thievery at the last second.

Day's end found us back near the mouth of the Buffalo River. As we trolled up the south bank of the White, Conley's rod doubled over. Even small rainbows feel big against current on light line, but this fish was determined to stay on the bottom. We thought it was a big brown trout, but we were delighted to see a flash of bronze as Conley muscled the fish toward the surface. It wasn't a trout, but a 15-inch smallmouth bass.

Our count for the day was 75 fish, all from a very short section of water. Eldridge and Kubler said they caught about 20. That got us close to 100 for the group, which made us all very optimistic for what the rest of the year will bring. 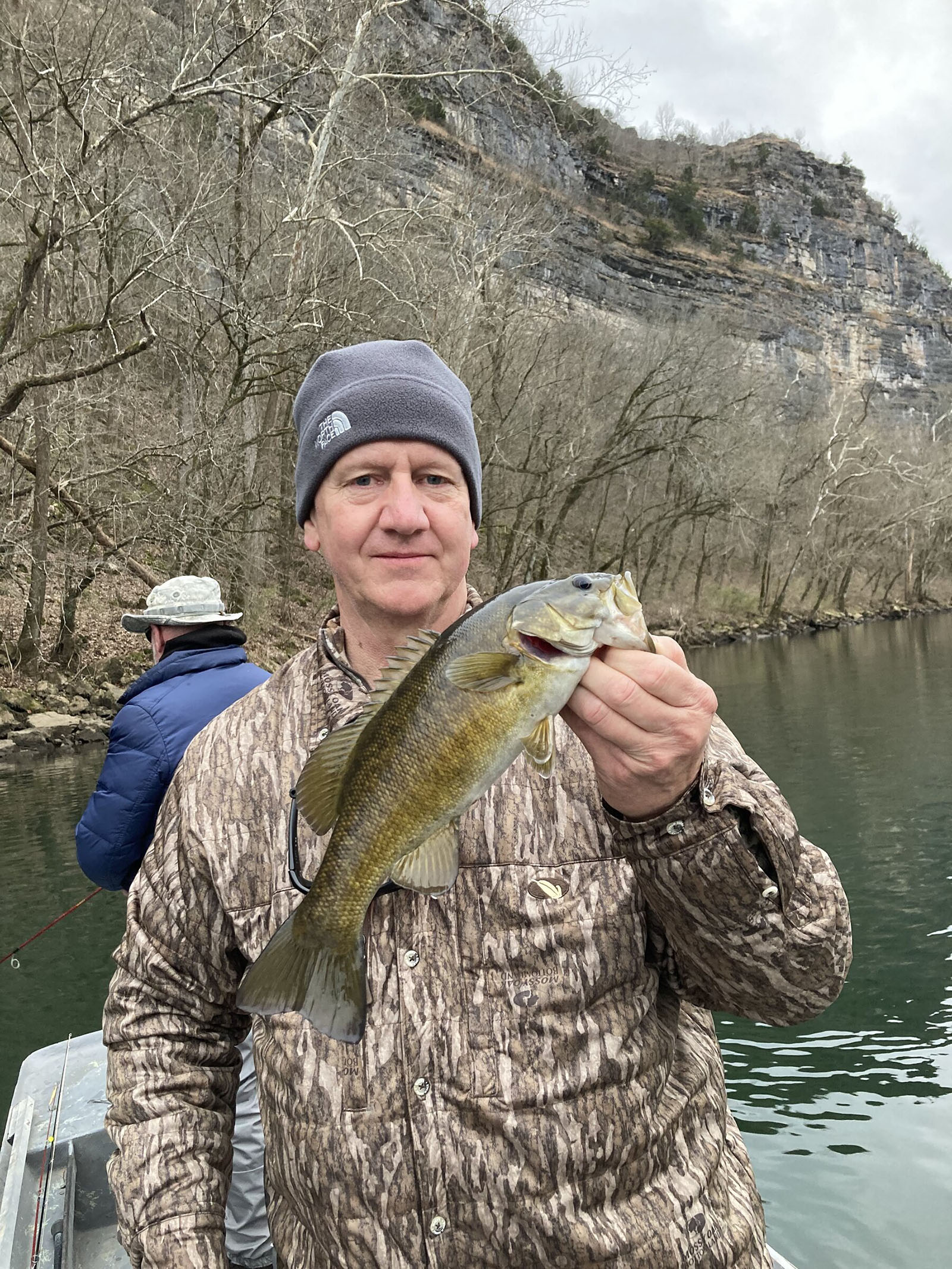 Brad Conley of Rogers caught the only two brown trout last weekend, as well as a smallmouth bass in the White River. (Arkansas Democrat-Gazette/ Bryan Hendricks)