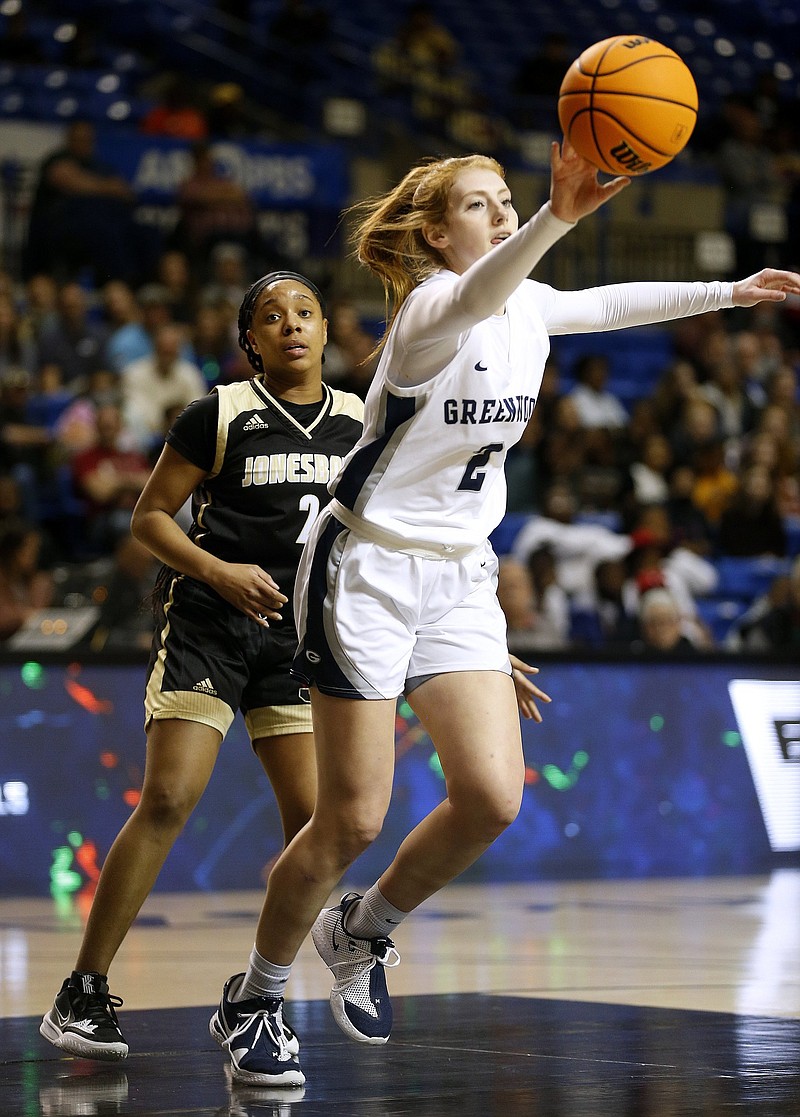 GREENWOOD — After a close win Tuesday night, Greenwood senior guard Mady Cartwright and the Lady Bulldogs felt they had something to prove Friday night.

It showed from the opening tip.

Cartwright combined with junior Anna Trusty to score 30 of the team’s 33 first-quarter points to roll in a 78-34 victory against Mountain Home. The commanding win followed up a last-second 60-58 victory on the road against Siloam Springs earlier this week.

“We had to come back and show ourselves what we could do,” Cartwright said. “We heard back at school how close that game was and how it wasn’t easy for us. We wanted to return strong.”

Greenwood (18-2, 5-0) was guided by big offensive nights from Cartwright, Trusty and Kylah Pearcy. Cartwright finished with a game-high 27 points to go with four rebounds and four steals. Trusty added 17 points to go with her seven rebounds, three steals and three assists. Pearcy also chipped in 14 points.

The Lady Bulldogs, the defending Class 5A state champs, used a fast start to jump out to a 33-9 advantage after the initial quarter. Greenwood scored 22 consecutive points during a scoring stretch for a 31-3 edge.

Trusty hit the game-winning basket Tuesday against Siloam Springs and got the offense going early Friday night. She drilled back-to-back 3-point baskets to get it all started. Greenwood made 13 of its 18 first-quarter field goals.

“We came out and played hard like we did earlier this week, but we finally started hitting shots,” Greenwood coach Clay Reeves said. “Hitting shots makes things a lot easier. We work hard at it everyday. We know we can make them, and they finally fell for us.”

Cartwright had 18 points after the initial quarter with Trusty right behind her with 12 points of her own. Reeves has won more than 750 games in his 35 years of coaching, but he hasn’t seen many guards as talented as Cartwright, who is 5-11, and Trusty, who is 6-0, playing together.

“They are both very good scorers and they can get to the basket,” Reeves said. “Teammates did a good job finding them. That is a special duo. They can handle the ball, make shots and play great defense. I haven’t had too many tall guards who can do it all like they can. They are special.”

Greenwood held a 53-23 lead heading into the break. Three-point shooting and turnovers were both big factors in the game. Mountain Home finished with 31 turnovers, while Greenwood made 12 3-point baskets.

It was a contrast from Greenwood’s game earlier this week, as it got open shots but not many went through the net.

“It’s better when you are making shots because you get that rhythm of the game way easier,” Cartwright said. “When you are missing, you can get down a little bit. That wasn’t the case for us this game because our shots were really falling. We trusted our shots would go in.”

Greenwood finished the game with eight different players scoring points for the Lady Bulldogs. Cartwright, who had 22 points at halftime, loved to see the team share the basketball throughout the game.

“Everybody does a good job with their role whether it’s scoring, rebounding or passing,” Cartwright said. “We have a lot of talent on this team. We have several ways to try to score, and most of the time they are going in.”