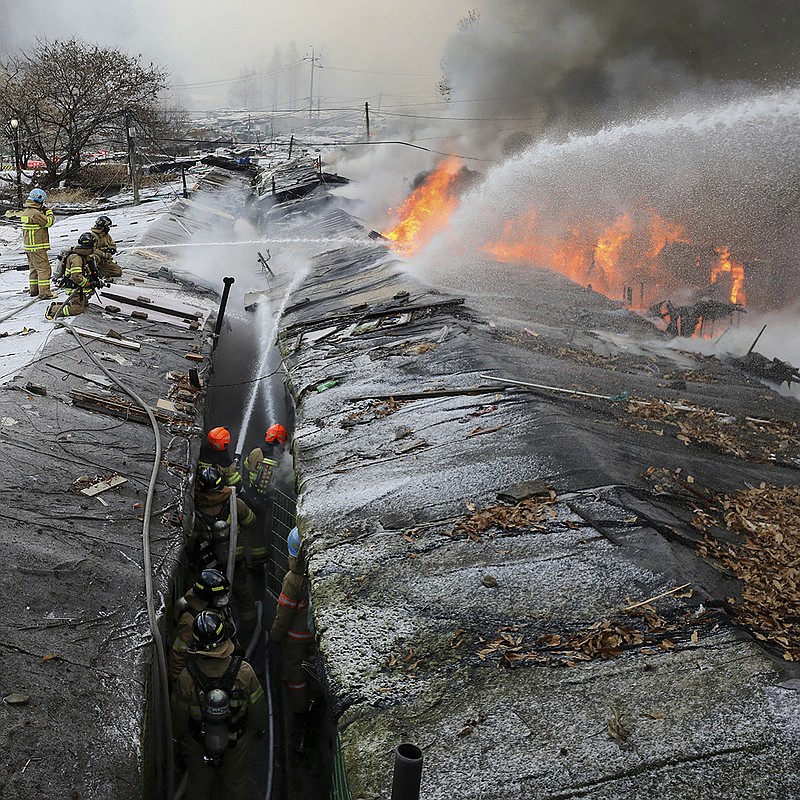 Firefighters battle a fire Friday at the Guryong shantytown in Seoul, South Korea. More than 60 homes were destroyed in the slum that is home to people mostly in their 60s or older, but no casualties were immediately reported. Dozens of firetrucks and 10 helicopters were dispatched along with hundreds of responders, officials said. More photos at arkansasonline.com/121fire/. (AP/Newsis/Baek Dong-hyun)

SEOUL -- The Seoul neighborhood of Gangnam is synonymous worldwide with glitzy high-rises, but makeshift homes were destroyed Friday in a lesser-known shantytown in a corner of the district.

Thanks to K-pop singer Psy's "Gangnam Style," the Seoul neighborhood's conspicuous consumption is known globally. The blaze is the latest in fire, flood and other disasters over the years that have affected Guryong, one of Seoul's last remaining slums.

Some 60 homes were destroyed in the fire that raged for more than three hours after it broke out about 3:30 p.m., said Shin Yong-ho, an official at the Gangnam Fire Station. No casualties were immediately reported.

The flames were mostly extinguished by 7:10 p.m. after hundreds of firefighters, police officers and public workers were dispatched to the area. Dozens of firetrucks and 10 helicopters were also deployed.

The fire prompted an emergency instruction from South Korean President Yoon Suk Yeol, who expressed alarm about the "fire vulnerability of Guryong's closely packed houses." Yoon, who is in Switzerland for the World Economic Forum, called on officials to mobilize all available resources to prevent casualties, according to presidential spokeswoman Kim Eun-hye.

The fire appears to have started at one of the dwellings, made with plywood and plastic sheets, Shin said. Investigations are underway to identify the exact cause.

Guryong village started as a settlement for Seoul residents displaced as a result of the city's urban renewal project ahead of the 1988 Summer Olympics. As part of the project, South Korea's military dictatorship summarily cleared away low-income neighborhoods.

For Seoul's Olympics makeover, hundreds of thousands of residents saw their houses razed to make way for new roads, skyscrapers, stadiums and parks. Many of those evicted flocked to the barren hills outside Seoul and built makeshift homes to form what are now called "moon villages" for their high elevation.

These slums still remain in Seoul, one of the most developed cities in the world. One of these moon villages served as the backdrop for the 2019 Oscar-winning South Korean film "Parasite" -- a black comedy depicting the wide social divide in the country.

Many residents of these villages are in their 60s or older, struggling to make ends meet amid a welfare shortfall in the rapidly aging society. Official data shows that around 40% of senior citizens in South Korea live in poverty, ranking the highest among the OECD group of developed nations.

In Guryong, many of the elderly residents struggle with age-related health issues, according to Lee Un-cheol, deputy head of Guryong's local community group. In a radio interview Lee said residents were notified promptly of the fire via emergency communications, and helpers were dispatched to evacuate those with impaired mobility.

The cardboard shacks lining Guryong's winding alleys have long been exposed to fire and other safety risks. There have been at least 16 instances of fire at the village since 2009, including one that killed a resident in 2014.

The shantytown was also severely hit by last summer's record rainfall and typhoons, which inflicted heavy economic losses on the capital. Despite repeated damage in Guryong, government plans for redevelopment of the area have made little headway over the years because of disagreements over compensation and other issues.

Seoul Mayor Oh Se-hoon visited the burned village and instructed officials to draw up a relocation plan for those who lost homes in the incident. Gangnam authorities have secured dozens of hotel rooms as temporary dwellings for them. Fire authorities said some 500 residents were evacuated after the fire.

Lim Jong-rye, an 82-year-old Guryong resident, told a local newspaper that he and his neighbors are "in disarray" and had nowhere to go ahead of the Lunar New Year, a major holiday in South Korea.