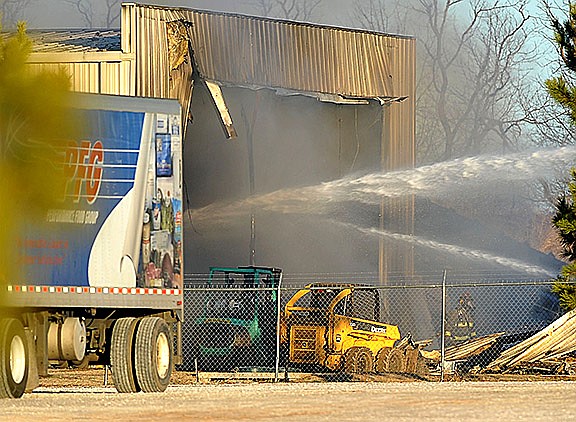 Firefighters from Lowell, Bethel Heights and Springdale spray down a fire at USA Metal on 721 S. Lincoln St. in Lowell in December 2013. USA Metal Recycling has appealed the revocation of its conditional use permit to the Benton County Circuit Court. (File photo/NWA Democrat-Gazette)

LOWELL -- USA Metal Recycling has appealed the revocation of its conditional use permit.

A notice of appeal concerning the city's decision was filed Wednesday with Benton County Circuit Court.

The Planning Commission revoked the company's permit on Oct. 3, ordering it to cease operations. The City Council affirmed the revocation Dec. 20 after determining the business still hadn't resolved safety issues at its site, like the creation of fire lanes up to legal standards.

The permit granted to the business at 721 S. Lincoln St. allowed recycling of metal, but not other material, which were documented at the scene of a fire last year, according to Karen Davis, the city's community development director. The business presented itself as a metal recycling facility, according to an Aug. 5 cease and desist letter from Davis to Tom Smith of USA Metal.

Smith has said his business shouldn't have been shut down. "A barrage of misinformation" led to a rushed decision by the commission, he told the council on Dec. 20.

According to Smith, there were no conditions on the conditional use permit received in 2009, deadlines given by the commission last year were "virtually impossible" for the business to meet and city staff refused his attempts at communication throughout the process. The name of the business implies it only recycles metal, though its plan has been to also recycle byproducts like cardboard boxes and shrink wrap, he said.

The Aug. 2 fire was in material dumped on a lot just north of the 721 S. Lincoln St. address, according to Davis. That lot is a part of USA Metal's permit, she said.

Material intended to be recycled through USA Metal was also found on a third northernmost lot, which isn't a part of the company's permit or associated with any business license, she said. The site was being used to dump debris from Smith's construction company, Redline Contractors, according to a Sept. 8 letter from Davis to the Planning Commission.

Fire crews on Aug. 2 were forced to access the fire through the north lot because fire lanes were blocked in the south and middle lots, according to Davis.

Plastics, cardboard, rubber, batteries, trash and construction debris were all documented at the site, according to a Fire Department report. Debris blocked fire crews' access to the fire, the report states.

Firefighters reported arriving at the site of the fire at 5:31 p.m. Aug. 2 and leaving just after midnight. During the event, runoff containing pollutants entered the city stormwater system and was eventually diverted to a city-owned detention pond.

The city ordered USA Metal to halt operations Aug. 5, stating records from the Arkansas Department of Energy and Environment showed the business reported a "change of business" to a construction demolition recycling facility in 2016.

The business' conditional use permit never allowed material such as construction debris at the site, according to the cease and desist letter.

The Planning Commission on Aug. 10 ordered the business to follow the conditional use permit, clean up construction and demolition debris at the site within a week and comply with state regulations to remediate the water in the pond.

The commission voted Sept. 8 to recommend extending the conditional use permit with conditions through Oct. 3, giving the business a list of required actions. City staff at the time recommended revoking the permit if the business did not cooperate by the commission's Oct. 3 meeting.

Actions ordered by the commission at the September meeting included moving all equipment and debris used for the business of USA Metal to the property of USA Metal, cooperating with the city's stormwater management department to stabilize dirt mounds, cleaning up the site until it is in compliance with city code, cooperating with the Fire Department to clearly define fire lanes with permanent barriers, properly storing liquids in barrels and tires under a covered area and removing liquids from the property each month.

As of Oct. 3, USA Metal had moved all its equipment and debris onto its own property and communicated with the stormwater management department, but it didn't show completion of any of the other tasks, city Special Services Director Richard Stone said at the time.

USA Metal, formerly Lowell Iron & Metal, has been under scrutiny from city officials and other agencies in the past following complaints of explosions, noise and smells believed to be coming from the facility. Multiple fires have been reported at the facility over the years.