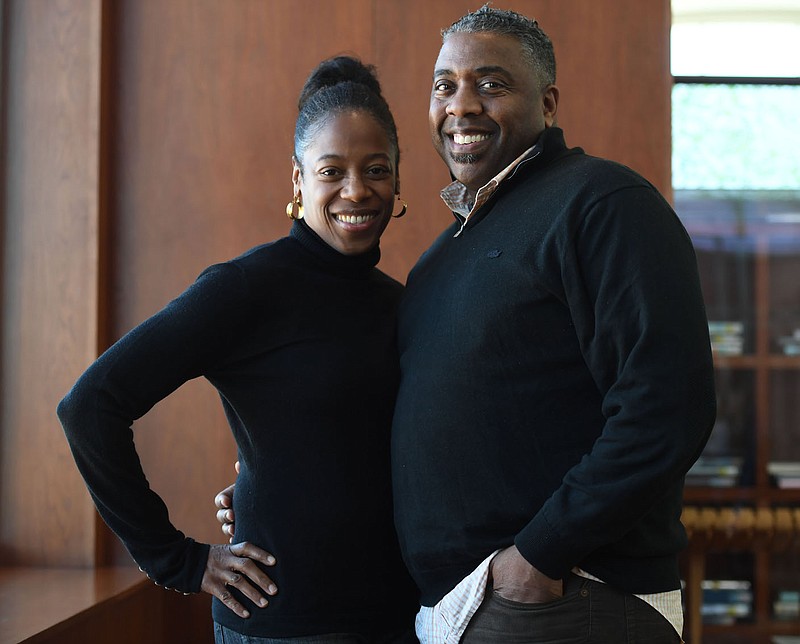 Randy and Nicola Wilburn and their three boys moved to Northwest Arkansas eight years ago and found themselves in a very giving community. When deciding how to give back themselves, they were happy to find an organization that helps other families. The Wilburns are the co-chairmen for this year’s Soup Sunday event in Northwest Arkansas. (NWA Democrat-Gazette/Andy Shupe)

Much like a child can harness the powers of the sun through a humble magnifying glass when positioned just right, the Arkansas Advocates for Children and Families makes use of their relatively few resources for exponentially greater impact, says Randy Wilburn, the host of the "I Am Northwest Arkansas" podcast.

Wilburn and his wife, Nicola Wilburn, are co-chairmen of this year's local Soup Sunday event from 4-6 p.m. Feb. 5 at the Rogers Convention Center. The long-standing fundraiser hopes to gather $200,000 for the operating budget of the nonprofit that frequently lobbies in the better interests of women, children and families in the state of Arkansas. The organization is in its 45th year.

Randy Wilburn was first impressed by Arkansas Advocates for Children and Families when he interviewed Laura Kellams, now interim co-executive director and Northwest Arkansas director, on his podcast to introduce the nonprofit organization to those in the area who might not know about it.

"I heard about the program and what they were doing and wanted to feature them and tell their story," Wilburn says.

He enjoys doing that for area nonprofits, since many of them are too busy doing important work to also put energy into telling the story of their organization. Wilburn says the feedback from his podcast listeners reflected an interest in social causes. And he and Nicola always participated in Soup Sunday as guests.

"Any organization that supports children, I'm all in," Nicola Wilburn says. "That's my perspective as a mother."

"I love soup, and it's a good cause, but looking at it from the other side, each cause costs money," Randy Wilburn says. "They're always thinking about what's the best way to raise the amount they need to achieve objectives each year."

The beginning of a new year means completely starting over, financially speaking.

"Every year, they're back to building up a war chest so they can do the things they do to represent women and children," Wilburn says. What they do with those funds is "give a voice to the voiceless. Arkansas is at the bottom (of national lists) for education, healthcare and other things, but at the top for riding a bike."

He sees AACF taking the benefits of the area and using those to reach people who haven't had a fair shot at basic necessities, like knowing their kids can go to the doctor whenever they need to, having an after-school program to safely land in until parents are off work and finding a feasibly priced entry into a children's summer program to prevent learning loss in the months out of school.

"We can't forget those individuals," Wilburn says. "We have to be able to create safe places to be heard and for their needs to be met."

The many initiatives of AACF help pick up where the state has left off, he says. And the organization often educates parents on how the laws and proposed changes to them will affect their families ahead of elections.

Wilburn remembers clearly an event that the nonprofit participated in at Northwest Arkansas Community College that gathered other organizations that represent women, children and families.

"They walked (other organizations) through how to interact with legislators, because (we) don't always understand that process, how to share your story with someone who might be opposed to you (when) partisan politics come into play," he says.

The information centered on bringing those political guards down to help others see your nonprofit and its function for what it is and who it benefits.

"We don't look at it as Republican or Democrat, but we think about how to get food on the table, or transportation to get people to work and affordable housing," Wilburn says. "I think that based on what they're able to do, AACF stands in the gap ... it's making sure everybody benefits within the Natural State."

The deep well of knowledge within Arkansas Advocates is helpful in knowing which of the issues to focus on at a time, Wilburn says, rather than approaching lawmakers on a number of topics all at once. The leaders of the nonprofit know that in solving big problems, you have to focus on one issue at a time, he says.

When Randy and Nicola Wilburn arrived in Northwest Arkansas eight years ago, they knew only one person. That was Mark Zweig, a University of Arkansas Walton Business College professor and Realtor who swore that this was the area to be.

It was quite a leap, since not only did they know no one else here, but they were leaving behind family, not to mention world-class hospitals and other amenities, in Boston. The area has grown and improved in that time, Randy says, but what's really stood out to him about it in the years since is the genuine spirit of serving others here in the Ozarks.

"Everybody here -- Walmart, J.B. Hunt, Tyson (Foods) -- is doing what they need to do. They all have objectives to be successful, but people tend to lower their gates when it comes to supporting good causes in this area," Wilburn says. "From a philanthropic perspective, it's much more open than in a lot of other environments."

Randy Wilburn grew up outside of New York City and has since lived in many parts of the world, including San Francisco, Washington, D.C., Boston and Atlanta.

"When it comes to donations (in those areas), some of the organizations get the benefits and some don't, but I don't see that in Northwest Arkansas," Wilburn says. "I've found it to be one of the most giving places I've lived."

Last year, Wilburn served as one of the Soup Sunday judges, making many of his foodie dreams come true as he tried a little of each of the 31 soups available at the event. He loved that the judges were a mix of people from all walks of life and that the flavors were a diverse selection from Northwest Arkansas' fine dining establishments, like Atlas, CONIFER and Yeyo's.

"We're talking about chefs who have sat with the greatest chefs in the world," Wilburn says. He recalls a scrumptious mushroom soup by Matthew Cooper, a consomme soup by Atlas Chef Elliot Hunt and a brisket gumbo by Nate Walls.

Nicola Wilburn appreciates that the wide menu can cater to everyone's culinary tastes regardless of your particular diet or preference for vegetarian options.

It's thoroughly a community event, the couple agree, because no one is trying to present themselves or their establishments as higher than anyone else's and often the event invites a business that's never joined them before. This year's Soup Sunday will have somewhere between 30 and 35 participating restaurants. Not only will they bring their soups with unique spins on classics like lobster bisque or dishes with unique ingredients like locally grown mushrooms, there will be bread and desserts galore.

This is the easiest way to contribute to a good organization doing excellent work, the Wilburns agree -- though volunteering your time would be a close second.

"More people need to be aware of what [Arkansas Advocates is] doing," Randy Wilburn says. "There's so much work that goes on behind the scenes, with folks traveling to Little Rock to ensure families in Northwest Arkansas are not being marginalized and are represented in legislative (sessions)." 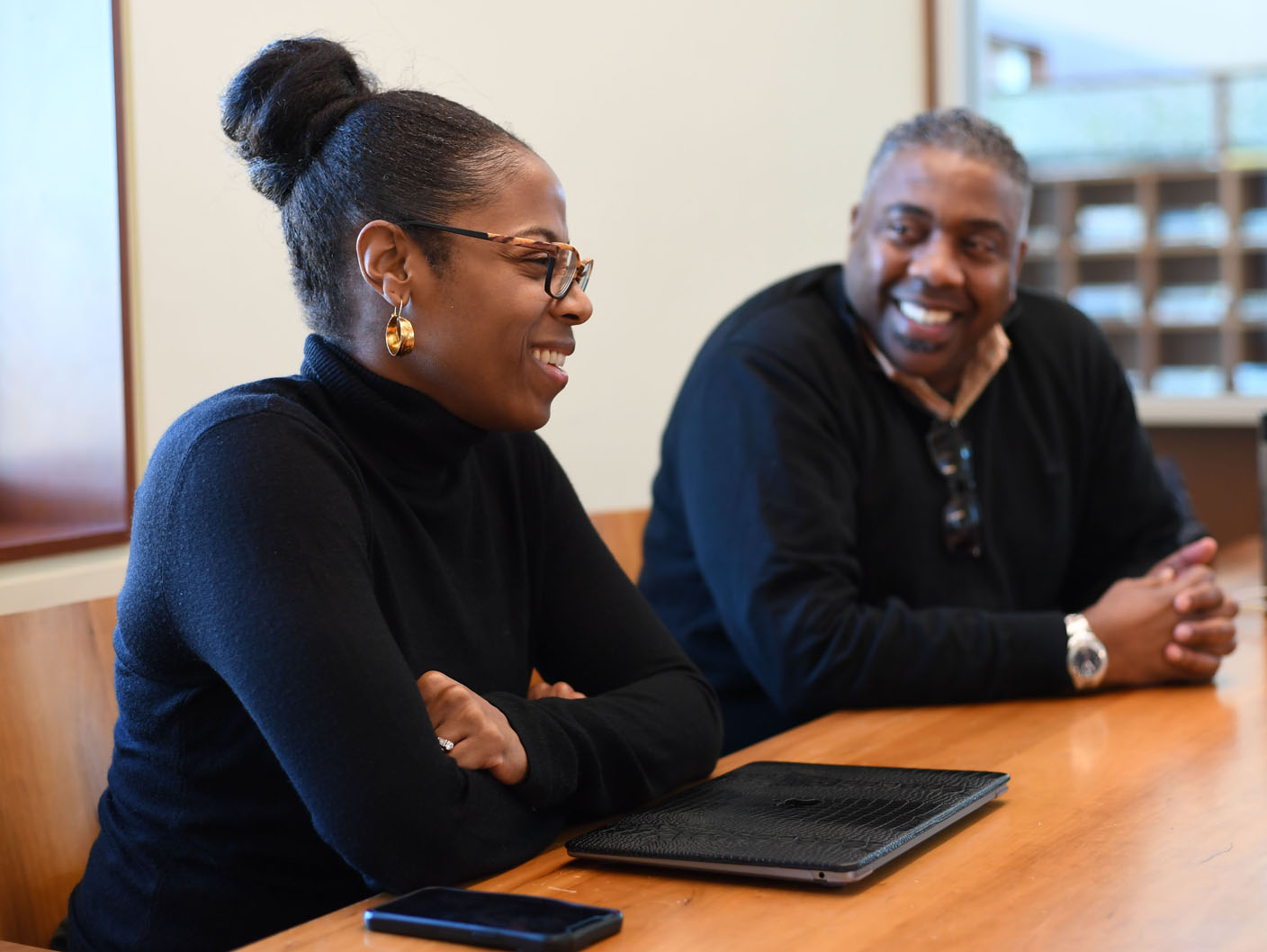 Arkansas Advocates for Children and Families uses the benefits of the area those to reach people around the state who haven’t had a fair shot at basic necessities, Randy Wilburn says. He and wife Nicola are the co-chairmen for this year’s Soup Sunday event in Northwest Arkansas, a fundraiser for AACF. (NWA Democrat-Gazette/Andy Shupe)
More News