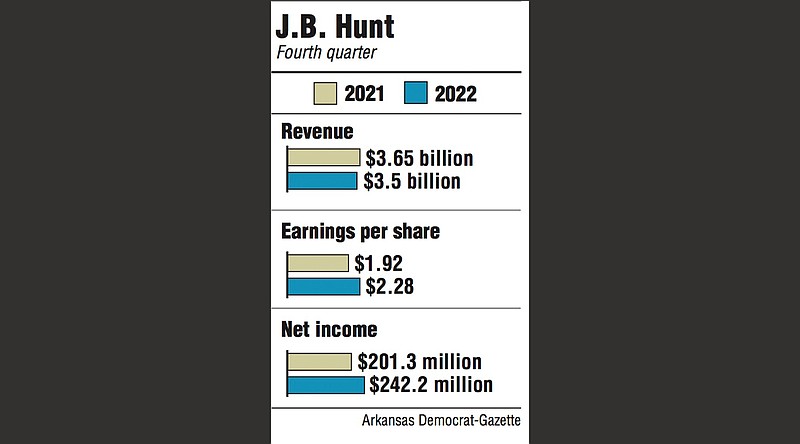 During a conference call with analysts Wednesday morning, company executives said there was a shift in market dynamics evident during the quarter, with customers becoming more cost conscious as capacity becomes more readily available.

The company also said it awarded $8.8 million in appreciation bonuses to its full-time drivers, along with its full-time hourly maintenance and office employees. The company issued a similar bonus last year. It also reported a $64 million one-time charge in casualty claims expense across several of its operating segments as cases were settled at much higher levels than in the past.

In a report issued to investors after J.B. Hunt released its earnings Wednesday, Justin Long, an analyst with Stephens Inc., said the weak freight market pressured the company across several of its segments. The report noted that without the $64 million charge for casualty claims, the company would have posted earnings per share of $2.37 for the quarter, much closer to the consensus estimate. Stephens rates J.B. Hunt stock overweight.

During the call with analysts, Chief Executive Officer John Roberts said during the fourth quarter J.B. Hunt saw some loosening in the labor market and modest improvements in equipment availability, but that was juxtaposed with seasonably weak fourth-quarter demand for transportation services as customers dealt with elevated inventories.

Shelley Simpson, the company president, said during the call that she sees both challenges and opportunities presented in the current environment. She said she's cautious but confident in the ability of the company to thrive in this and any future environment. The company focus will remain on its people, technology and capacity to provide customers with value and cost savings.

"During the pandemic, customers value capacity most, with less weight on cost and service," she said. "We see the shift occurring now where customers are putting more value on cost or how to save the money and on service quality as capacity is less difficult to source."

The American Trucking Associations' advanced seasonally adjusted For-Hire Truck Tonnage Index was down 2.5% in November after dropping 1.2% in October, according to a release last month.

"For-hire truck tonnage saw the largest single monthly decrease in November since the start of the pandemic and a total drop of 3.7% in October and November," Bob Costello, the association's chief economist, said in a statement. "The decreases match anecdotal reports of a soft fall freight season as well as a slowing goods-economy generally. Housing-related freight is particularly weak."

J.B. Hunt Transport Services Chief Financial Officer John Kuhlow said freight volumes were pressured by unseasonably soft demand in the quarter but operating results were fairly resilient except for the costs brought on by the higher casualty claim payouts.

In the fourth quarter, J.B. Hunt's intermodal segment's revenue was up 11% to $1.75 billion, helped by a 12% increase in revenue per load due to changes in mix of freight, customer rates and fuel surcharge revenue, the company said. Excluding fuel surcharges, revenue was up 6% when compared to the same quarter a year ago. Operating income was $179.5 million, down 8% from the fourth quarter of 2021, due to costs to attract drivers and other workers along with increased insurance costs, but these were partially offset by higher rates.

The company's dedicated contract services segment booked revenue of $880 million for the quarter, up 24% on strong demand and increased revenue per truck. Customer retention rates remained above 98%. Operating income for the segment was $75.8 million, up 4%, mostly on the addition of new business but offset somewhat by other expenses, including higher insurance costs.

J.B. Hunt's integrated capacity solutions, or asset-light brokerage segment, booked revenue of $496 million, down 33% from the same quarter last year. Revenue per load was down 9% due to changes in customer freight mix and other factors in the truckload business, compared to the same quarter last year. The segment booked an operating loss of $2.9 million compared to operating income of $21.2 for the year-ago period, on lower gross profit, higher insurance and claims expense and higher technology costs, the company said.

The truckload segment saw its revenue grow by 6% to $276 million. Taking fuel surcharges out of the equation, revenue was down 2%, with an 8% decline in revenue per load, but was improved somewhat by a 6% increase in load volume. Operating income was $16.9 million, down 35%, despite higher volume.

Revenue in the final mile services segment was $255 million, up 15% when compared to the 2021 quarter, helped by J.B. Hunt's acquisition of Zenith Freight Lines LLC, which closed in February, and the addition of new business. Operating income was $12.6 million, up 70% mostly on high revenue quality offset some by higher equipment and maintenance costs.