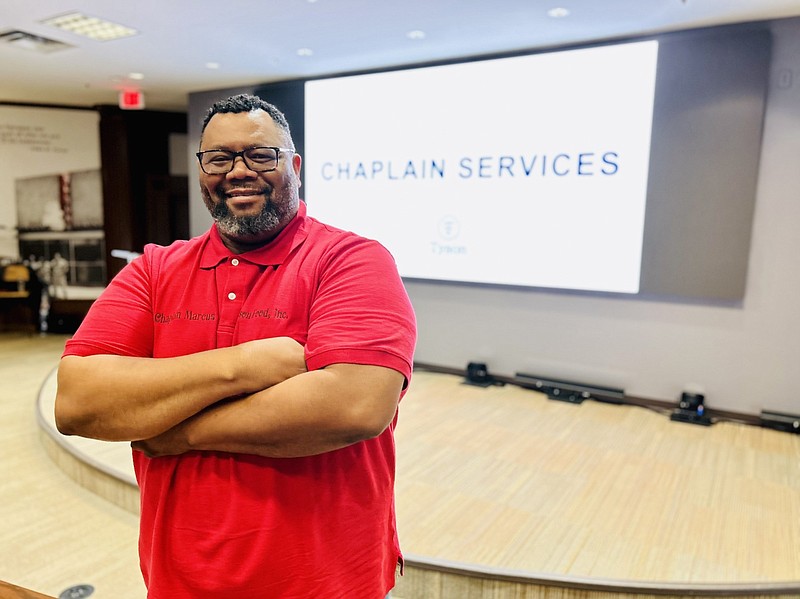 Marcus Mann is shown in Northwest Arkansas in this October 2022 file photo. Mann, a second-round NBA draft pick in 1996, could have played for the Golden State Warriors. Instead, he gave up basketball one day before the start of the 1996-97 season. He returned to Mississippi and became a minister, eventually working at Tyson Foods as a chaplain. (Courtesy Tyson Foods)

Marcus Mann had a shot at basketball glory, but he gave it up to preach the gospel instead.

Decades after walking away from money and fame, the 6-foot-8-inch Carthage, Miss., native still believes he made the right choice.

On Sundays, he pastors his hometown's First Baptist Church. During the week, he labors for the Lord at the Tyson Foods plant in Forest, Miss.

In between, he's been working on his autobiography. "He Chose Me: From Player to Pulpit" is expected to be published in June.

Mann, who was raised by his churchgoing mother and grandparents, discovered early on that he had a gift for basketball. Others could see it, too.

"My 10th-grade year was when I started getting recruitment letters from all over the place -- every school in Mississippi, and then Wake Forest, Florida, UCLA, University of Cincinnati, Missouri. You name it."

Ultimately, he decided to stick close to home. But Mann's pathway to the NBA was hardly traditional.

After graduating from high school, he played his first two years at East Central Community College in Decatur, Miss., before transferring to Mississippi Valley State University, where he lit up the scoreboard for the next two years.

His senior year, Mann averaged 21.7 points and 13.6 rebounds per game, leading the Delta Devils to the NCAA Division I tournament.

With the 1996-97 season nearing, Mann headed to California for training camp. He made it through the preseason but was miserable, so he asked God for guidance.

The answer changed the trajectory of his life.

The highly regarded rookie informed his coaches, one day before the season opener, that he was hanging up his sneakers.

Rather than battling for rebounds with Michael Jordan and Shaquille O'Neal, he headed back to the Magnolia State. He has been there ever since.

Mann's decision stunned his fans and, financially, it didn't make sense. The NBA's minimum rookie salary that year was $220,000.

"I came home and faced a lot of ridicule, because a lot of people were living their dreams through me," he says.

Nonetheless, he was convinced he'd been obedient to the Lord's command. A quarter-century later, that conviction has not wavered.

Initially, he worked as a substitute teacher at a local high school. Later, he served as an alcohol and drug counselor at the Walnut Grove Correctional Facility.

Eventually, he was hired by Tyson Foods to serve as one of its chaplains. Next month, he'll mark his 10th anniversary at the Forest plant.

Ministering to Tyson employees is a privilege, he says.

"We're here to support our team members," he says.

In times of joy, Mann is there to celebrate. In times of crisis, he is there to comfort, visiting patients in the hospital, attending funerals, sending letters of condolence.

The job is fulfilling, Mann says.