Pope in spotlight for role in trial at Vatican City 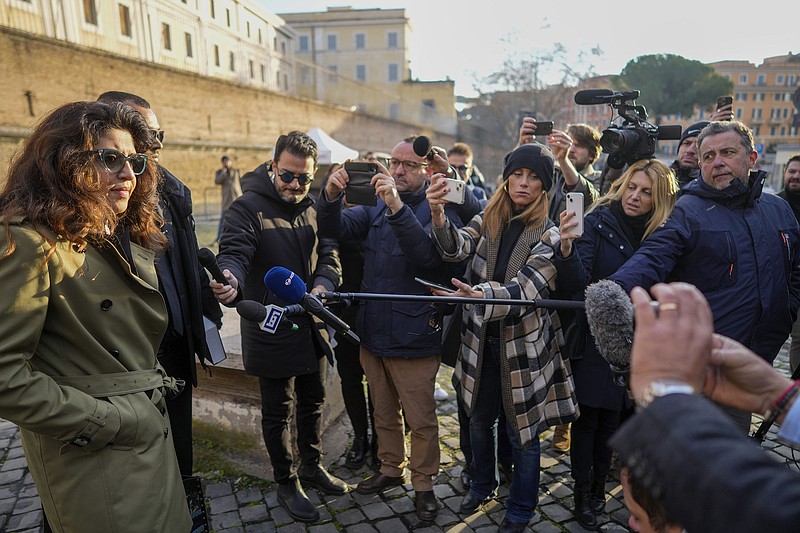 Francesca Chaouqui (left), former financial consultant for the Vatican, talks to reporters Friday as she arrives to testify before the city-state’s criminal tribunal at the Vatican. (AP/Andrew Medichi)

VATICAN CITY -- Pope Francis' own role in the investigation into financial wrongdoing at the Holy See took center stage Friday in the Vatican tribunal, with witnesses saying he encouraged a key suspect to cooperate with prosecutors and a key defendant accusing him of interfering in the trial.

The public relations expert was summoned after it emerged late last year that she had played a behind-the-scenes role in persuading a key suspect-turned-star-witness to change his story and implicate his former boss, Cardinal Angelo Becciu. But the daylong hearing ended with Becciu reading aloud an exchange of letters with the pope that suggested Francis continued to cast a shadow over the trial.

The trial in the city-state's criminal tribunal originated in the Holy See's $379 million investment in a London residential property. Prosecutors have charged 10 people, alleging that Vatican monsignors and brokers fleeced the Holy See of tens of millions of dollars in fees and commissions and then extorted the Holy See of $16.2 million to get full control of the property.

Monsignor Alberto Perlasca initially was among the prime suspects, but he changed his story in August 2020 and started cooperating with prosecutors, blaming Becciu, then the No. 2 in the secretariat of state, for the London investment and other questionable expenditures.

When he was interrogated in November, Perlasca revealed that he changed his story after receiving advice via a family friend from someone he believed to be a retired magistrate who was working closely with Vatican investigators, prosecutors and the pope.

It soon emerged that the retired magistrate was Chaouqui, who is known in Vatican circles for her role in the "Vatileaks" scandal of 2015-16 in which she was convicted of conspiring to pass confidential documents on to journalists. Chaouqui blamed Becciu for being behind her "Vatileaks" arrest and prosecution.

Chaouqui told the court Friday that she didn't coach Perlasca to help the prosecution as much as to help Pope Francis understand what was going on "behind his back."

Chaouqui testified that, through a family friend, she suggested Perlasca record podcasts of what he knew about a host of questionable dealings for the pope to hear, giving Perlasca prompts that he could answer.

"This seemed the best way for me to let him know these things," Chaouqui said, implying that she had regular access to the pope and provided him with a steady stream of information.

The family friend, Genoveffa Ciferri, for her part, told the court that Francis, as well as Perlasca's parents, also encouraged Perlasca to cooperate with prosecutors. Francis and Perlasca live in the same Vatican hotel and have known each other since Perlasca worked in the Vatican embassy in Argentina, from 2006-08.

"He was encouraged by the Holy Father," to cooperate, Ciferri said.

Francis' name also came up at the end of the day's testimony, when Becciu expressed incredulity that Chaouqui claimed to have more direct access to the pope than he did as the No. 2 in the secretariat of state. He read aloud a letter that he wrote Francis on Aug. 19, 2022, after he saw photos of Chaouqui being received by Francis during a general audience the previous day.

Becciu recalled that back in 2017, after the Vatileaks trial, Francis had told Becciu "You must never mention this woman's name again" and had reaffirmed a ban on her entering Vatican territory.

"With yesterday's gesture you, Holy Father, broke your much proclaimed commitment to neutrality in the trial," Becciu wrote the pontiff. "By receiving her, you have shown solidarity with her and indirect support for her accusatory theses against me. In procedural terms your act will not be seen as emanating from the pope but from the First Magistrate of the legal system of the Vatican State, and therefore as an interference in the trial."

Francis, the same day, sent a letter of apology back to Becciu, in which he said he had only agreed to receive her because he had been asked to.

He said he had "nearly forgotten" about Chaouqui's history and had no idea she was involved in the current trial.

"I ask your forgiveness and apologize if this offended and hurt you," Francis wrote. "It's my fault alone, also the habit of forgetting nasty things. Please forgive me if I offended you."

Print Headline: Pope in spotlight for role in trial at Vatican City