Exhibit collects the stories of Northwest Arkansans by April Wallace | January 12, 2023 at 1:45 a.m. 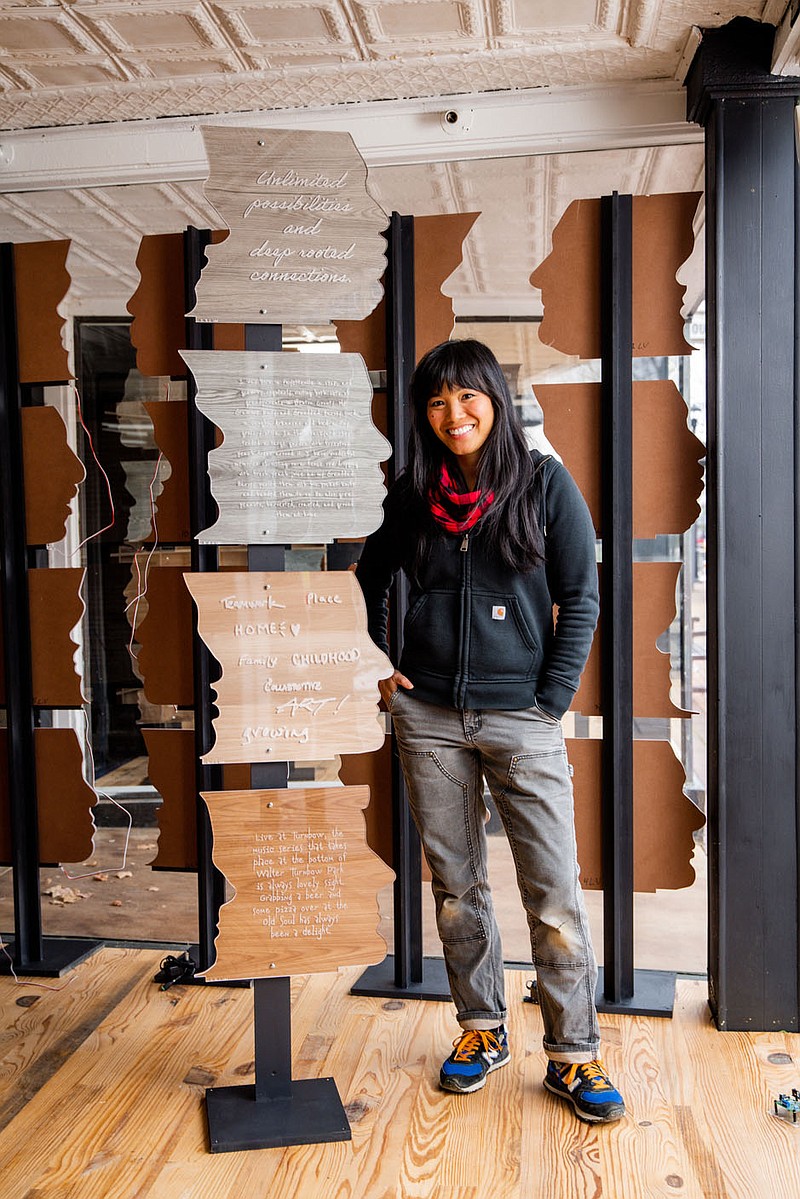 New York City-based sculpture and installation artist Risa Puno was impressed by the connectivity and shared historical memories of Northwest Arkansas. She based her interactive exhibit “Come By” on that very spirit. It’s on view now at Famous Hardware in Springdale. (Courtesy Photo/CACHE)

While dining or walking on Emma Avenue in Springdale, you might notice some unusual sounds -- a distinct knocking, a door opening, boots on leaves and birds in the trees; chickens clucking; children laughing; dishes clinking; a microwave whirring on; a Spanish guitar beginning to play. Depending on the time of day, it might feel a bit ghostly, given that you don't see any doors opening or chickens nearby and not a cowboy boot in sight.

The soundscape -- created by Reilly Dickens-Hoffman -- is just one element of "Come By," an interactive art installation by New York City-based sculpture and installation artist Risa Puno. It shares the stories of people who live in Springdale and Northwest Arkansas in the windows of the old Famous Hardware building.

As folks walk by or up to the windows, their movements trigger low, warm lighting from within the panels so they can better read the stories etched on them. Many are excerpts from the locally compiled "Ozark Story Project" by Amber Perrodin. That interactivity is signature to Puno's work, something she uses to understand how we relate to one another.

The soundtrack begins as you get closer to the center of the exhibit, at the doorway, where a poem by local Noelia Cerna is front and center. Illustrations included are by Maximiliano Calabotta.

"I wanted it to feel like the sounds of home here," Puno says, whether that's bacon frying, a sewing machine humming, a campfire crackling. "The same way that if you read the different panels they're kind of related, from people's memories and perspectives and immerse you in there."

On first glance, these puzzle-like pieces might appear similar to the shape of Arkansas and Missouri, but as you come closer, it's clear that they're people's side profiles, silhouettes of the storytellers. The way the panels and stories fit together perfectly is meant to symbolize how individuals hold different parts of the same region's history, according to a press release.

Puno noticed those existing, parallel stories right away when she came to Springdale for a site visit.

She had met Lucas Cowan, now director of cultural policy for CACHE (Creative Arkansas Community Hub and Exchange), some years back when he was the curator at the conservancy at the Rose Kennedy Greenway in Boston.

When Cowan asked if she might be interested in conducting a project in Northwest Arkansas, Puno had never been to the area, so she said, "Sure, let's take a trip!"

"The idea that there's this place that still has a name and sign, an identity, but to get to be a guest in it was really exciting," Puno says. "And it was a challenge of what I could do with that (storefront), how to make it interactive."

By chance, Amber Perrodin happened to be walking someone else around downtown Springdale and giving them an oral history through the lens of her family history, so Puno tagged along. As they approached the old formal bridal shop, they noticed a man on the porch. It was someone who Perrodin knew, and who picked up the history where she left off, adding context from his own family's point of view.

"It was like it was choreographed and (utterly) charming," Puno says. She had heard about such things happening in small towns, but to see it unfold in front of her was a whole different story. "It made me think a lot about collective memory."

Up until that point, Puno thought of collective memory being mostly large events like Sept. 11, in which everybody has memories of one thing from different vantage points. But the interaction in downtown Springdale showed her collective memory could be holding different memories that fit together like puzzle pieces.

"The more people you incorporate, the more complete it's going to be," Puno says. "It's a lovely way of understanding the collective history in a way that leaves room for things other than trauma, leaves room for it to grow and stories to be excavated."

The inspiration that came of the little downtown tour was very serendipitous, says Perrodin, artist and community manager at CACHE.

Puno "quickly picked up on the culture, which is funny because I thought it was a special thing that only I can see," Perrodin says, laughing. "But she found it as charming as the people who live here perceive it to be. She saw that this is special, there's something special happening here."

Having come to Springdale with open expectations and no overriding ideas, Puno locked in on that as the crux of her exhibit. She wanted to make art that reflected the collective history of Northwest Arkansas. That's part of Puno's overall philosophy for creating.

"Especially with public art, as a guest in a public space, I want my work to be a good guest, to serve the community it's in, instead of whatever ideas I have about it," Puno says. "I want it to make sense in context. I call myself a context-specific artist, to think about not just the site but the people experiencing it."

The welcoming tone and generosity she experienced early on in that site visit continued as she sought stories to include.

Perrodin listened as Puno described her inspiration and talked about how she would "like to collect local stories, hear Arkansan experiences, include some recipes, and how adding a little poetry would be the dream," an exact process that she had just gone through in creating the Ozark Story Project. It blew Puno away to realize it had already been done. Perrodin offered use of her book to see "what's next and keep [the stories] alive, to have another iteration of how to tell those stories," Perrodin says.

All in all, Puno only visited twice, once initially and once to install, but Zoom allowed her more conversations with the public.

Puno collected additional stories and local experiences herself using a longer questionnaire based essentially on thoughts surrounding home, what they want others to know about it, their hopes for the area and what America means to you. Then she collaborated with other locals, like Angie Albright, director of the Shiloh Museum of Ozark History, Brandon Weston, author of "Ozark Healing Magic," and poet Noelia Cerna, who worked with Perrodin on Ozark Story Project events, too.

Working with local storytellers and local fabricators was an intentional goal of Puno's.

"I didn't want to be some like big city artist who comes in and takes the money without thinking about the people there," she says. "There's a richness in the creatives of the area, and I wanted to reinvest."

When it came to materials, Puno at first wanted to use wood for the panels, but the cost was too prohibitive for the project, so she used vinyl flooring made to look like wood. She and the other artists who pitched in liked that it was a humble, more accessible building material. On top of the vinyl is acrylic, laser-engraved with the various stories, memories, recipes and illustrations from members of the community in the style of their own handwriting, enabled by Illustrator.

Puno collected the silhouettes of locals, and then Reilly Dickens-Hoffman helped her with the "tech-wizardry" necessary for the faces' laser engraving. Even programming the responsive lighting for the panels was a family affair, thanks to "electronics lighting wiz" John Crommer, his wife Linda, their daughter and Linda's mom who formed a little assembly line to finish it out.

As you cruise by Famous Hardware, the stories you encounter first on the outer edges of the front windows are largely about recreation -- enjoying the Greenway, going to find a Christmas tree with grandfather -- but the closer you get to the vestibule, the more deeply personal the stories become about remembrance, struggle and hardship.

"I learned so much about people" through this project, Puno says. "That encompasses the spirit of it -- getting to know people and the idea that as you engage, as you take initiative to get closer, more gets illuminated, and people light up." 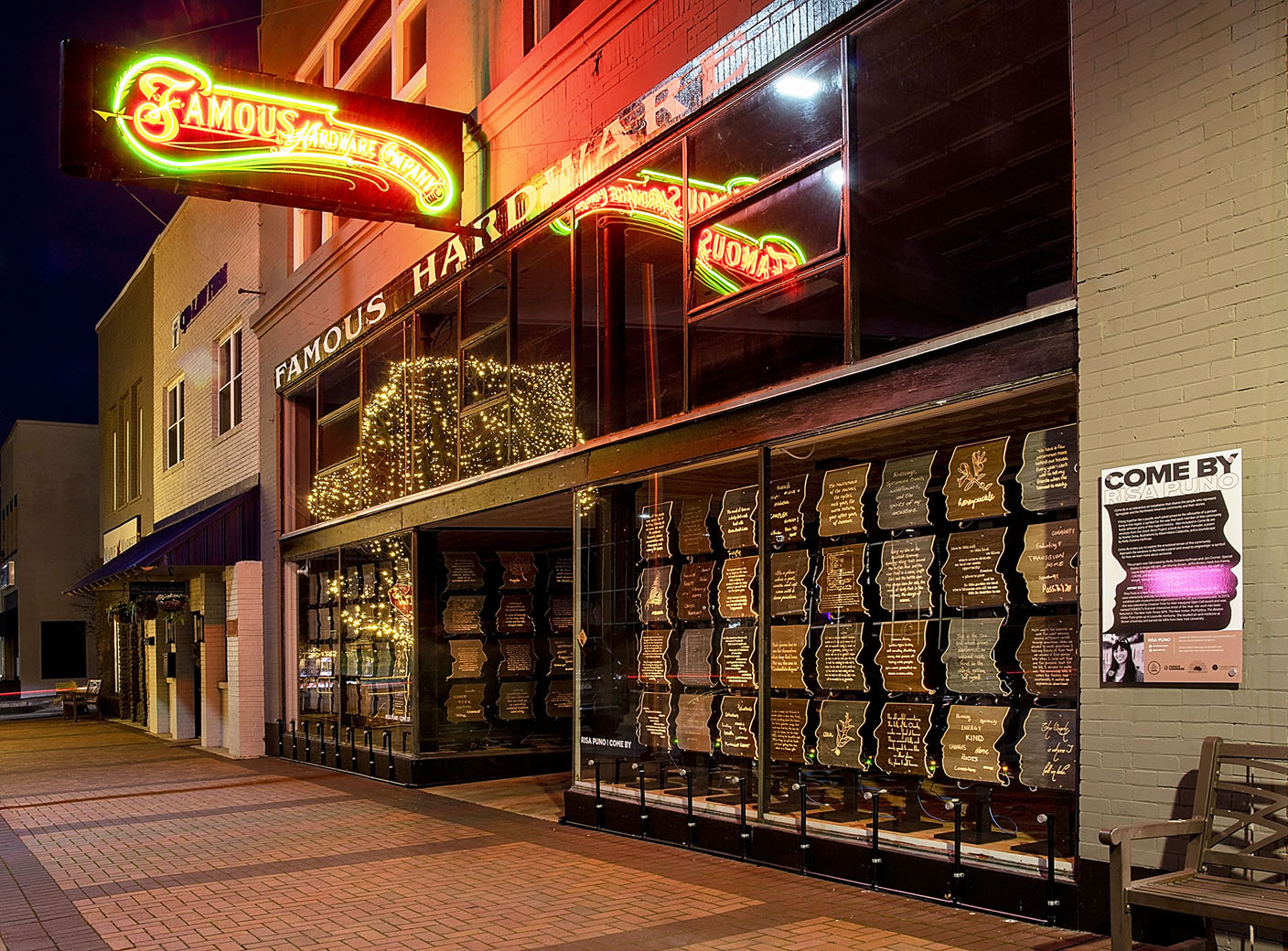 Artist Risa Puno was studying medicine when someone urged her to take an elective class to be more well rounded, so she gave art a try — and discovered it was her true path. Without a formal art background, Puno feels more strongly about creating art for everyday people. You don’t have to understand the canon of art history to enjoy her often interactive works, she says. (Courtesy Photo/CACHE)
FAQ
More News

When: Until the end of February

Bonus: Meet creator Risa Puno during an artist lecture and reception at 6 p.m. Feb. 9 at The Medium, 214 S. Main St. in Springdale.

Print Headline: History in the making