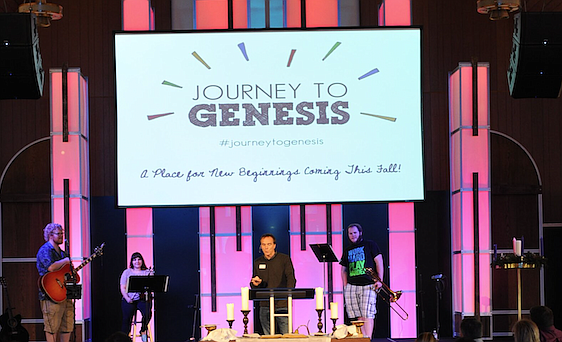 A meeting at the state's largest United Methodist congregation to discuss breaking away from the denomination has been postponed by an Arkansas Conference official, leaving uncertain the date for a straw poll on the topic.

In a letter last week to his Fayetteville-area congregants, Central United Methodist Church Pastor Carness Vaughan said Northwest District Superintendent Blake Bradford had made the decision "due to issues surrounding the Genesis Church campus that need to get resolved prior to moving forward with the Discernment Process."

Originally set for Sunday, the listening session and vote will be rescheduled, he said.

Genesis Church, once known as Wiggins Memorial United Methodist Church, was a congregation with dwindling membership that closed its doors in 2014, reopening as Central's South Fayetteville satellite campus.

Since then it has flourished, with an emphasis, like its predecessor, on ministering to the poor, the homeless and those working to overcome addictions.

Though linked with Central, Genesis Church has become increasingly independent in recent years and did so with the blessing of Central's senior leadership, according to Vaughan, Central's pastor for the past 18 months.

In a Dec. 13 letter addressed to the "Genesis Family & Friends," Campus Pastor Jody Farrell said he believes God is calling Genesis toward becoming "an independent non-denominational church that is not formally connected to Central or to our current denomination."

Since members of the Genesis community appear to be preparing to leave Central, no matter the outcome of the vote, Arkansas Conference officials believe their participation in Central's listening session and straw poll creates a "potential conflict of interest" that could "undermine the integrity of the vote," Conference spokeswoman Amy Ezell said in an email Thursday. "Simply put, persons who intend to leave Central UMC to start an independent church should not be voting on whether or not Central UMC itself should disaffiliate. Therefore, the third listening session is postponed until issues surrounding the Genesis Campus are resolved."

The United Methodist Church, as with other mainline Protestant bodies, has been divided by concerns such as same-sex marriage and ordination of LGBT people.

Under a provision added to the denomination's Book of Discipline in 2019, individual congregations, by a two-thirds vote, can "disaffiliate" from the United Methodist Church over "issues related to human sexuality," provided they meet certain financial obligations and receive approval from their regional conference.

The referendum can only occur after a series of listening sessions and only is scheduled if a majority of those voting in the straw poll favor doing so.

Nationwide, more than 2,000 United Methodist congregations have had their disaffiliations ratified.

In a blog post Thursday, Vaughan said he is committed to doing all he can "to help get us back on track."

"As you are all aware, it is clear that our congregation is not of one mind on whether we should stay with the United Methodist Church or disaffiliate to become an independent Methodist church. The only way to make sure that every voice is heard and that no one is disenfranchised when it comes to deciding Central's future is to work through the process that has been put forward to us by the denomination and the Arkansas Conference and see where it takes us," he wrote. "Please be assured I and our lay leadership will be working with our DS [district superintendent] to resolve this issue and restart the process as soon as possible. Please continue to be in prayer for our church in this challenging season."

In an email, Bill Kincaid, a leader of United for Central, which opposes disaffiliation, welcomed the delay.

"Dr. Bradford's decision is another indication of his efforts to ensure fairness and transparency, although United for Central was fully prepared for a vote and looks forward to ending this divisive process. A number of those with United for Central are active at our Genesis campus, and we expect those important ministries to continue and thrive as we stay in the United Methodist Church," he wrote.

A leader of Central Wesleyans, which supports disaffiliation, portrayed the postponement as "one more sign of the brokenness of the United Methodist governance structure" and accused United for Central of obstructionism. "All the traditionalists at Central want is a peaceful process and the right to determine the future of our church! We deserve that. ... We beg them to stop this political maneuvering and just let us vote!" Ann Linebarger said in an email.

Thus far, 35 Arkansas congregations have reached disaffiliation agreements and had them ratified by the Arkansas Conference.

Three others voting to disaffiliate -- Cabot, Searcy First and Jonesboro First United Methodist Church -- were denied ratification at a Nov. 19 special session of the Arkansas Annual Conference after opponents disputed the fairness of the process in those congregations.

The Jonesboro church's pastor, John Miles, was suspended Dec. 16, one day after members of his congregation voted to approve new bylaws; the meeting had not been authorized by conference officials and that the action items were "clearly contrary to the Constitution of the United Methodist Church."

On Dec. 19, the Jonesboro congregation filed suit, seeking to quiet title and to obtain temporary restraining order and preliminary injunction "barring the Conference from taking any further actions to interfere with the Church's title to its properties and use, occupancy, and enjoyment of the same during the pendency of this matter."

In her email, Ezell, the conference spokeswoman, said she can't comment on the details of the lawsuit itself, "but I can tell you that no one wins in this situation.''