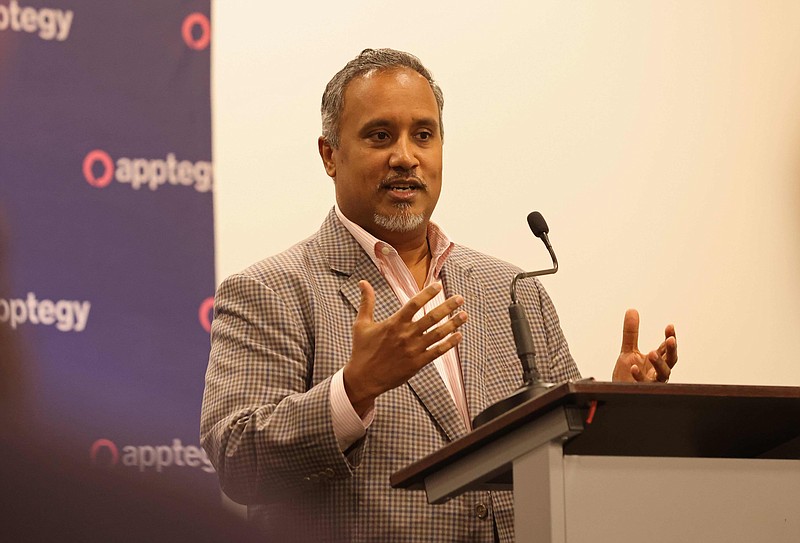 Apptegy founder and CEO Jeston George addresses guests at the technology company's headquarters in Little Rock during an event announcing an expansion of operations and an intent to hire 300 new employees Friday, Jan. 6, 2023. (Arkansas Democrat-Gazette/Colin Murphey)

The Little Rock-based software company Apptegy plans to add 300 new positions in the coming years, officials announced on Friday during a news conference at the company's offices in the Riverdale neighborhood.

Apptegy provides mobile apps and websites for school districts. At the moment, the company has nearly 400 full-time employees, meaning the planned hiring would bring its workforce to around 700.

The new positions are expected to include roles in the areas of sales, software engineering and client experience.

He told attendees that "the momentum right now for us is awesome and we're not slowing down."

The company is preparing to build its third and fourth products, George said. He predicted that "the scale and the rate at which we're growing is about to accelerate, and we're so happy and proud that we get to share this with the Little Rock community."

"This is an incredible Arkansas story of growth, of entrepreneurship, of investing, of taking a risk and getting a reward for it," Gov. Asa Hutchinson said of Apptegy's growth as a startup business.

Hutchinson, who is set to leave office on Tuesday when Gov.-elect Sarah Huckabee Sanders is sworn in, suggested that Friday's event would be the last jobs announcement for him as governor and for Secretary of Commerce Mike Preston. Sanders has said she plans to nominate Hugh McDonald to the Cabinet post.

He referred to his administration's efforts to expand computer science education in the state.

Founded in 2013 and "launched" in 2015, Apptegy was originally based within the Little Rock Technology Park as its first tenant, according to a news release.

The company claims to work with more than 3,000 school districts in the United States as well as two schools overseas.

Apptegy's offices in Riverdale encompass over 60,000 square feet and the company "plans to expand its footprint in 2023," the news release said.

Jay Chesshir, the president and chief executive officer of the Little Rock Regional Chamber of Commerce, reported to attendees that Scott had recently tested negative.

In a written statement included with the news release, Scott said, "Entrepreneurs like Jeston George and success stories like Apptegy are making Little Rock a catalyst for the new South and a premier city for jobs growth. I congratulate Jeston George and the team at Apptegy on their great success in Little Rock."