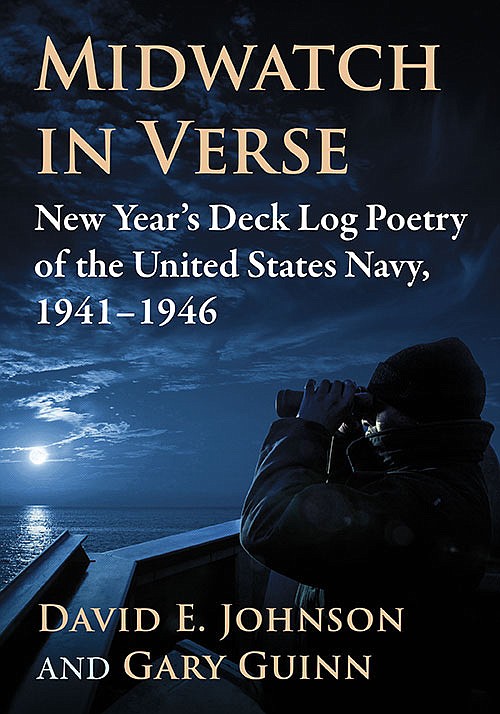 “Midwatch in Verse: New Year’s Deck Log Poetry of the United States Navy, 1941-1946” will be published by McFarland Books early this year. The book is dedicated to the deck log poetry written during World War II. It is available for pre-order at the publisher: https://mcfarlandbooks.com/product/midwatch-in-verse/ and from Amazon and Barnes & Noble. The Midwatch website will continue to explore the Naval New Year’s poetry tradition, its history and various manifestations at https://midwatch-in-verse.com.

For the average person, the deck logs of the U.S. Navy are what Dave Johnson would call mind-numbing and indecipherable.

The records, quasi-legal documents, were a requirement of each ship to note various bits of technical information -- ship speed and direction, even the number of propeller rotations and other things that would only be useful or make sense if you were in the Navy.

But one time of year, sailors were allowed to deviate from the benign record keeping and exhibit creativity with brief storytelling. During the first watch of the New Year, from midnight to 4 a.m., the Officer of the Deck could record in verse.

Dave Johnson and Gary Guinn, longtime professors, friends, and now co-authors, got interested in the unusual tradition following their retirement. They've compiled a book of the New Year's poems by unsuspecting poets that will be published by McFarland Books this year. Each entry features a poem, information about the sailor who wrote it and a history of the ship that he was on.

How did the two of you find and get interested in this particular bit of history?

Gary Guinn, professor emeritus of English who retired from John Brown University in 2012: I'm a native Arkansan, and I was in the Naval Reserve for a while. That's where my interest began.

Dave Johnson, professor emeritus of experimental psychology at John Brown University: A number of years ago, I started doing research on my father-in-law's service in the Navy. He had several positions: assistant gunnery officer, mostly torpedo officer, and then moved to first lieutenant and was on a destroyer two and a half years in World War II. I was interested in goings on of his ship because it was at most major engagements of World War II. Because of his position as lieutenant, he was one of the last people off the ship when it sold.

After I married my wife, during one of the first times I was visiting with her family, I noticed on the kitchen table that he had a cloth napkin. We were all using paper napkins, but he had cloth napkin in a ring that looked curious. I knew nothing about it and I didn't ask (about the ring) until after he passed away and I began doing research.

The napkin ring had been on the ship since it was commissioned in 1937. It had all the names of the people who had the position he held on the ship. He used it every day after the war.

It was this cool historical thing, because that ship was in Pearl Harbor and so many different major engagements, so we got in touch with The Naval History and Heritage Command (formerly the Naval Historical Center) in Washington and the national U.S. Navy Museum and asked if they were interested in having it. We donated it, so it's in Washington.

The archivist who dealt with it had 40 some napkin rings, but this was the most unique one from a highly decorated ship.

How did you go from finding interesting poems to knowing it was enough for a book?

Guinn: I saw that there were these guys, young officers, who had this opportunity to write a poem for Christ's sake instead of a deck log, and it would reveal their humanity. It was the worst war in history, and they sat down on a ship on midnight of New Year's Day and wrote a poem. It showed they still had a sense of humor and humanity, even at war.

On the blog, (we've done) what we do in the book. We give a short ship history, a poem, and then a little about the writer. We stumbled on poems while doing other research. The first time I read one, I texted Dave: "This is a book. This is an interesting thing." Dave said no, so I said: "OK, I'll be coauthor, and we'll do a book."

We searched several publishers before we found one. My generation, the first after World War II, was raised on World War II movies and books, it was romanticized. Our fathers were in the group that fought. So it was partly that attraction to it.

What's one of your favorites, or one that struck you as unusual?

Guinn: For me, it was the one that's an imitation of Poe's "The Raven."

Johnson: The first one that anyone knows anything about was the 1926 Idaho poem. One thing we're interested in is where the tradition started. Nobody really seems to know and so far, the earliest one anybody's been able to find was from 1926, written by Officer Doc Wiler on U.S.S. Idaho. I'll read the last few lines: "At 1:15 Ross Kelly, a pill-rolling pharmacist's mate returned from leave on schedule, he's lucky he wasn't late. That's all the dope this morning except between us two. If the captain ever sees this log, my god what will he do?"

It turns out, at the bottom of the log, where the captain has to sign off, he wrote: "The captain is glad to see that the old Navy custom of writing the first watch of the year in rhyme is known to the younger members of the service. The watch stands as written." And that's the earliest found. Gary and I have gone through hundreds of January 1st logs, from ships in mid-19th century up through 1926, and we've not found another (older) one. But that log implies that it's been around much longer.

Guinn: (We thought) if that's true, where are all the other poems?

Johnson: We made an appendix that took out little snippets of humorous comments that the people made about, that these poem writers made about having to write the poem; being the person to write the poem was not the most popular duty.

Guinn: There's a wide variety of styles of writing in these poems; it's really surprising. Most followed the basic old rhythm like couplets, four beat rhythm, sort of like hymns they had heard in church all their lives, but some of these poets really stretched. Like the poet named Paul E. McArthur on the U.S.S. Washington in 1943 did an imitation of (Edgar Allen) Poe's "The Raven," and he actually did a pretty good job.

"Once upon a midnight dreary, while I slumbered weak and weary,

dreaming of such far-off places as New York and good ol' Philly,

suddenly there came a tapping and someone opened up my chamber door.

'Tis a visitor, I muttered as he uttered twelve to four, only that and nothing more."

Some of them really tried to do something special with it. A lot wrote your basic old poem.

When you read something like that, do you get an image like I do of him sitting on the ship reading when he has two minutes in bed, trying to squeeze in some enjoyment out of Navy life?

Guinn: Some of these guys would have been graduates of the military academies. They would have a pretty good college education if that's the route they came to be an officer. So I always think of a guy like this who was Naval Academy grad who had a fairly good sense of literature, right, so he would write something like this as opposed to just getting a rhyme.

How much space did they get for writing these New Year's poems?

Johnson: Almost as much space as they wanted. Some of the poems, particularly when you get into the Vietnam War, some took more than one page. Some maybe had six to eight lines.

Guinn: The longer ones we found were 60 lines or so. But most were more like 20 lines or so... The captain expected them to include a lot of the technical information in the poem. Sometimes it was kind of funny.

How did you go about choosing which ones to use in the book?

Johnson: Part of it was if the poem was interesting (and) we have several like the one Gary read that were interesting in terms of format.

For example, one that a person wrote on the U.S.S. Pennsylvania, we both read and thought, 'This is a really cool poem." It almost familiar in terms of meter... but we couldn't figure it out. Finally I realized it was essentially the same meter from the poem "Gunga Din" by Rudyard Kipling. And it was almost perfect in that regard.

(Others were selected because) the ship on which the poem was written had an interesting history and of course the third part of each chapter is (about) the person who wrote it. We write short biographies of them, and sometimes it had to do with the individual who wrote the poem because we ran into some really interesting individuals.

Does the combination give you a glimpse of what was happening in their lives, a context for what they're writing?

Johnson: In some ways it does. Our book is stories. Each chapter story of a ship, the story of the poems. Gary expertly analyzed them in structure and so on but how the poems related to the individual's humanity and as the war went along, the poems changed to some extent, and the stories of person who wrote it. Some of the stories are funny. Some are tragic.

Guinn: One destroyer (that we researched but ultimately left out of the book) was sunk by kamikaze planes crashing into the ship, late in the war. The man who wrote a poem on that ship then transferred right before it was sunk with all hands lost, so everybody on board died, and the poet (managed to escape since he'd) just transferred before it sunk.

Some of the lines of the poem struck me as this sad irony: "One January 1945 and frankly we're lucky to be alive, we're steaming back from old Mindoro, where the kamikazes are plenty thorough." They had just come from an area where kamikazes were and survived it, the poet's saying, "Wow, we're lucky to be alive," and then the ship sunk. Those elements got to us sometimes.

What are the lasting effects of these poems?

Johnson: Some poets did not survive the war. In writing the biographies of these men, I decided to see if I could find family members. We were able to get the poems with a few dozen families, none of whom knew their relative (did that). None of them knowing their father did this kind of thing. That was extraordinarily rewarding.

Guinn: They were surprised to get a poem from father or grandfather and appreciative. Like with the U.S.S. Enterprise, the most decorated ship in the war ... when Dave sent a copy of a poem from the Enterprise to (the poet's) daughter, Kris Adams, it turns out she's a professional singer and writer and she asked if she could write a poem for her father. We said we'd love to have it, so we included in the chapter with his poem. That was sweet.

Johnson: Of the families who received their family member's poem, one called it an absolute thrill to receive -- goosebump material.

April Wallace is writer and coordinator of the Profiles section for the Northwest Arkansas Democrat-Gazette. Email her at [email protected]