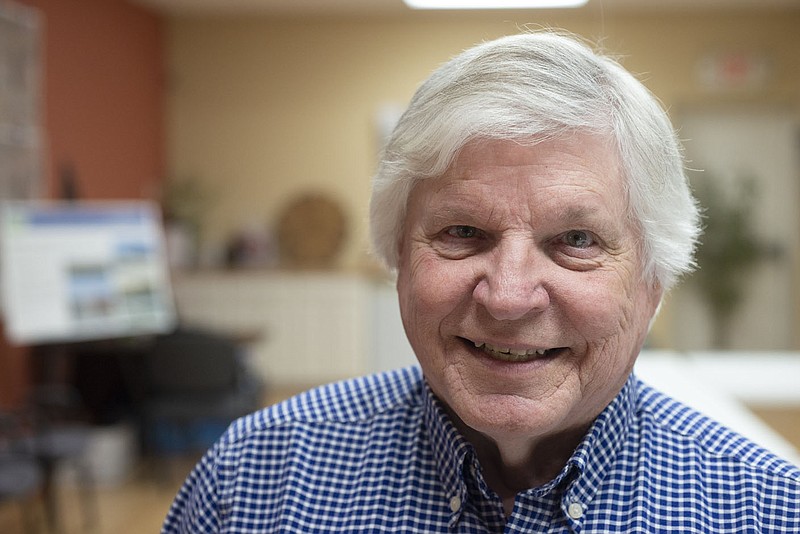 Multimillion-dollar projects such as connecting the Razorback Greenway and closing the gap in Interstate 49 between Arkansas and Missouri stand out when reviewing Jeff Hawkins' tenure as director of the Northwest Arkansas Regional Planning Commission.

But mayors and others interviewed about Hawkins' pending retirement describe how no issue nor detail was too small for him.

"The thing I appreciate most about Jeff Hawkins is his demeanor," said Farmington Mayor Ernie Penn. "To him, there are no stupid questions. He answered the same questions thousands of times over" from different towns through the years.

Penn was Farmington's mayor when Hawkins arrived in Northwest Arkansas in 2001. Penn served his city as either the mayor or a City Council member throughout Hawkins' tenure at the commission.

"He almost always knew the answer, and, if he didn't, he knew where to find it," Penn said.

Hawkins' expertise ranges over every topic of city planning and legal requirements, Penn and others said: the legal details of annexations, water and sewer service issues, obtaining federal grants, drawing city ward or school district zones for elections, and on and on.

The Regional Planning Commission is a council made up of representatives of each of the cities in Benton and Washington counties and those two counties' governments, plus the Beaver Water District and the Northwest Arkansas National Airport board. The commission's duties include helping its members meet federal requirements for planning to fill transportation needs and applying for federal grants. It also is a consensus-building organization making sure cities don't create problems for each other. After all, Hawkins said, 21 of the 32 cities represented by the commission have boundaries touching at least one of their neighbors.

"Anything you can think of, whether it's water or sewer or roads or any governmental action or function that transcends political or jurisdictional boundaries, it's a regional activity and it should be looked at regionally," Hawkins, 72, said when describing what the commission does.

"He told us we could call him any time, day or night," Penn said. "That is very valuable to any municipality."

Even cities with large, well-staffed planning departments like Fayetteville need the expertise Hawkins possesses, Mayor Lioneld Jordan said. Yes, Hawkins knows the nitty-gritty of city issues, but also knows the big picture of how the region as a whole is developing, Jordan said.

Hawkins could go as deeply into detail as needed on any subject involving planning, said Mayor Greg Hines of Rogers.

"If you ask Jeff what time it is, he'll tell you how to build a clock and how time itself was invented," Hines said. "So much of the success of Northwest Arkansas has his fingerprints on it."

A HOOSIER ARRIVES IN ARKANSAS

Hawkins worked for the highway commission in his native Indiana when the Southeast Arkansas Regional Planning Commission, based in Pine Bluff, sought him out in 1974. The then-24-year-old urban planner specialized in making sure the Indiana commission complied with the federal Traffic Operations to Increase Capacity and Safety federal grant program. The program channeled much of the federal spending on roads at the time. He had no family nor friends living in Arkansas, he said.

As best as he can tell, he was recommended to the Arkansas commission by consultants and other professionals who had worked with him in Indiana.

"When I came to Arkansas, Northwest Arkansas didn't even have an urbanized area," Hawkins said, referring to the federal definition of a built-up area with at least 50,000 population. There were only four "urbanized areas" in Arkansas in 1974: Little Rock, Pine Bluff, Texarkana and Fort Smith. The recently married Hawkins came to Arkansas for the increase in pay, he said.

"Bless her heart, she came to Arkansas sight unseen," Hawkins said of his wife, Christine, who passed away five years ago.

One of his duties in Arkansas was water quality planning. Normally a quiet task, Hawkins made a splash when he wrote to then-Gov. Bill Clinton criticizing the governor's administration for ignoring a dioxin pollution problem in Bayou Meto, which was showing up in catfish sold in markets in the region.

"I had a friend call me when the story came out about how I am going to retire next year," Hawkins said. "He said he was surprised I was able to keep a job in the public sector after that letter came out," which was in 1979 or 1980.

Hawkins took a job as director of the Jonesboro Planning, Inspection and Code Enforcement Department in 1999. While there, the then-director of the Arkansas Municipal League, Don Zimmerman, approached him about a job to address planning issues statewide. The municipal league is a lobby representing most of the cities and towns in Arkansas. The Northwest Arkansas commission sought him out at the same time to take his current job, Hawkins said.

Hawkins mentioned the offer from Northwest Arkansas to Zimmerman.

"They must have talked," Hawkins said of the Northwest group and Zimmerman. "He came up to me later and said if I took that Northwest Arkansas job, it would solve about half the problems he was going to hire me for."

Hawkins took the Northwest Arkansas job despite the fact the region's commission had fractured.

"When I came, a third of the local governments were not members and, in fact, two of the original seven founding members, Siloam Springs and Benton County, had dropped out of the commission years and years earlier. To say that the organization was regional was a bit questionable in the minds of many," he said in an earlier interview.

Healing the divisions was Hawkins' first priority, said Uvalde Lindsey of Fayetteville. Lindsey is a former state senator who was executive director of the Northwest Arkansas Council when Hawkins came to the region in 2001. The council is a group of the region's business and community leaders.

"Regional planning had been in decline for a number of years when he got here, and several members of the commission had left," Lindsey said. "He repaired those bridges between communities shortly and quickly."

The commission has remained largely harmonious ever since, said Hawkins and others interviewed.

The key to the commission's consensus is equal treatment, Hawkins said.

"Everybody has a seat at the table," he said. "That's the important thing."

In theory, every entity represented has one vote for every 10,000 population. But the way the commission works is to allow each member entity a maximum of three votes. There is a provision where a member can call for a "weighted vote" in which every entity gets as many votes as the 10,000-population-equals-one-vote will allow, but in the almost 22 years Hawkins has served in Northwest Arkansas, that measure was only used once, he said.

The commission applied for a grant from the U.S. Department of Transportation in 2010 to build the Razorback Greenway, linking some of the existing trails in Fayetteville and Bentonville to create a continuous trail. The trail now extends 37 miles from Bella Vista to Fayetteville, passing through six downtown areas. The commission applied for $24.5 million and got $15 million. At the time the Walton Family Foundation contributed another $13 million.

"We caught some criticism for that, getting money for trails when there was so many road needs, but trails is what the available federal money was for," Hawkins said.

Any criticism quickly passed after the trails opened, he said.

"I still get calls asking, 'How did you pull this off with so many different jurisdictions involved?'" Hawkins said, with the latest such call coming from planners in Portland, Ore.

One of the biggest projects done by the commission and Hawkins sent $25 million to Missouri.

I-49 had a 19-mile gap between Bentonville and Pineville, Mo.

Then in 2018, the federal government accepted proposals for highway projects. Arkansas had its own state taxpayer money already allocated to build the Arkansas portion, and the Northwest Arkansas commission asked the Missouri Department of Transportation if it would apply for the federal money. Missouri, however, had other priorities that year for its requests.

Hawkins then asked the Missouri department: If the Northwest Arkansas commission requested $25 million on Missouri's behalf, would Missouri accept it?

"Of course they said they wouldn't turn $25 million down," he said. The Northwest Arkansas commission got the money and turned it over. Gov. Asa Hutchinson and Missouri Gov. Mike Parson presided at the ribbon-cutting ceremony opening the freeway on Sept. 30, 2021.

Hawkins recommends Tim Conklin, his assistant director, to succeed him.

"Any success I had in my job over the years is due in large part to having good, hard-working, dedicated staff members," Hawkins said. "As I told the board earlier this month, I think I'll be leaving them in good hands." 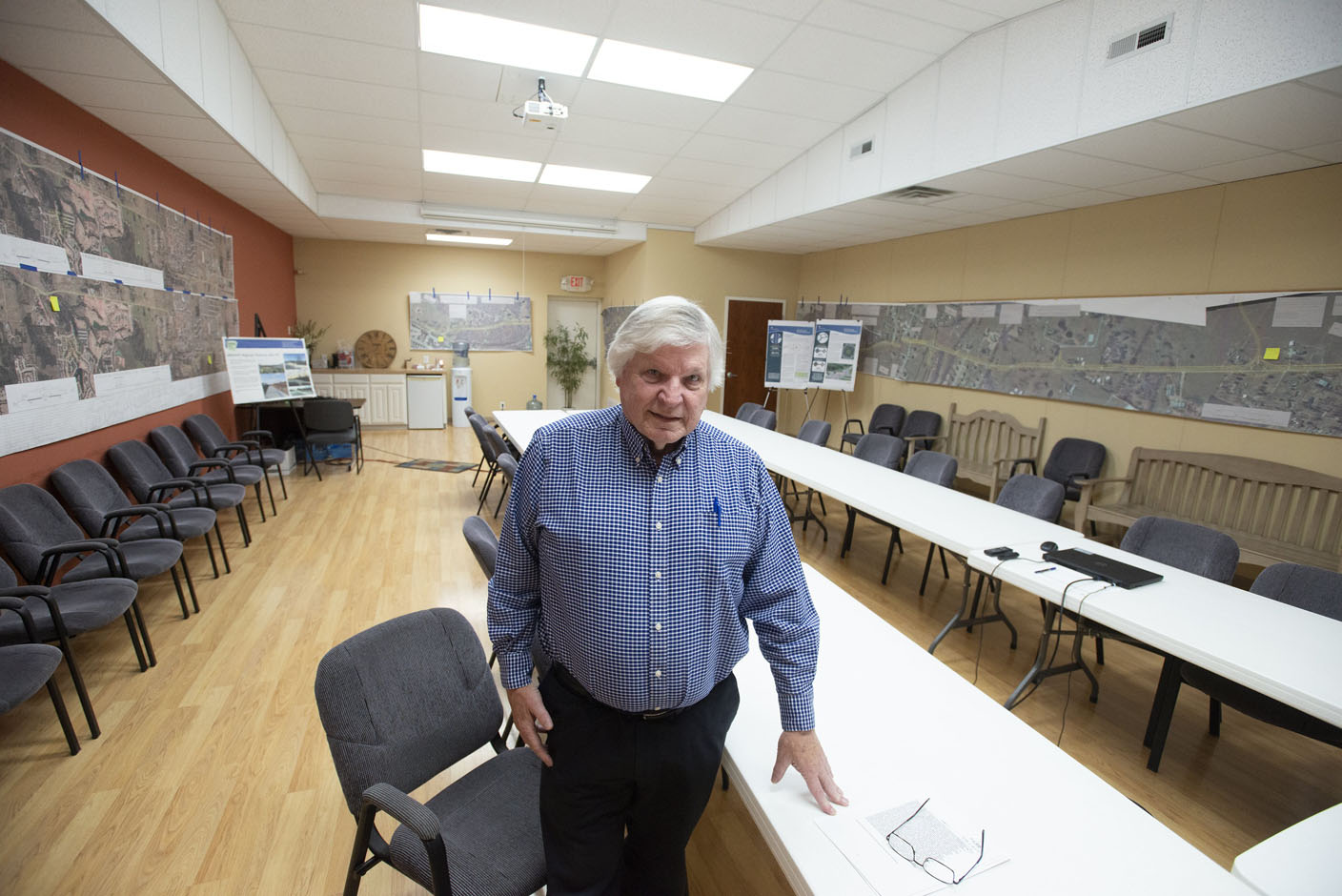