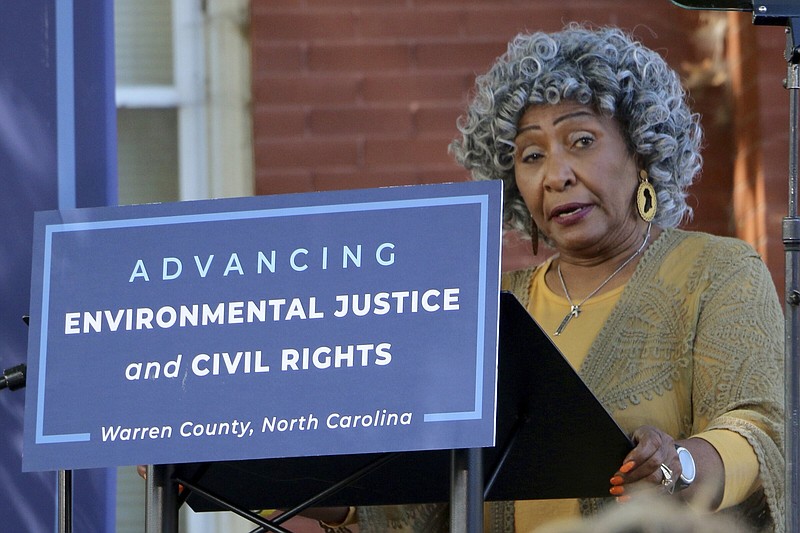 Dollie Burwell, a leader of the 1982 Warren County protests that birthed the environmental justice movement, speaks about the evolution of the movement at a ceremony in Warrenton, N.C., on Saturday, Sept. 24, 2022. (AP Photo/Hannah Schoenbaum)

WARRENTON, N.C. -- Forty years after a predominantly Black community in Warren County, N.C., rallied against hosting a hazardous waste landfill, President Joe Biden's top environment official visited Saturday what is considered the birthplace of the environmental justice movement to unveil a national office that will distribute $3 billion in block grants to underserved communities burdened by pollution.

Joined by civil-rights leaders and participants from the 1982 protests, Michael Regan, the first Black administrator of the Environmental Protection Agency, announced he is dedicating a new senior level of leadership to the environmental justice movement those protests ignited.

"In the past, many of our communities have had to compete for very small grants," Regan said in an interview. "We're ... going to be sure that this money goes to those who need it the most and those who've never had a seat at the table."

North Carolina in 1978 designated Warren County as a disposal site for truckloads of soil laced with highly carcinogenic chemical compounds that later contaminated the water supply.

Though demonstrators were unable to shut down the operation after six weeks of nonviolent protests and more than 500 arrests in 1982, their efforts have been lauded by civil-rights leaders as the impetus for a global uprising against environmental racism.

Officials have routinely chosen low-income communities of color to host hazardous waste facilities since the early 1900s. The neglect of critical infrastructure in predominantly Black communities, ranging from Flint, Mich., to Jackson, Miss., has led to problems still seen today.

According to the Clean Air Task Force, Black Americans are 75% more likely than white Americans to live near a factory or plant and nearly four times as likely to die from exposure to pollutants.

The Rev. Dr. William Barber II, social activist and leader of the Poor People's Campaign, said he sees Regan's announcement as "a great starting point" and will continue to demand more of the Biden administration.

"Our votes are not support. Our votes are our demands," Barber said in an interview. "This is about a lifestyle versus disability because when you poison the land and the water, you hurt people's everyday life."