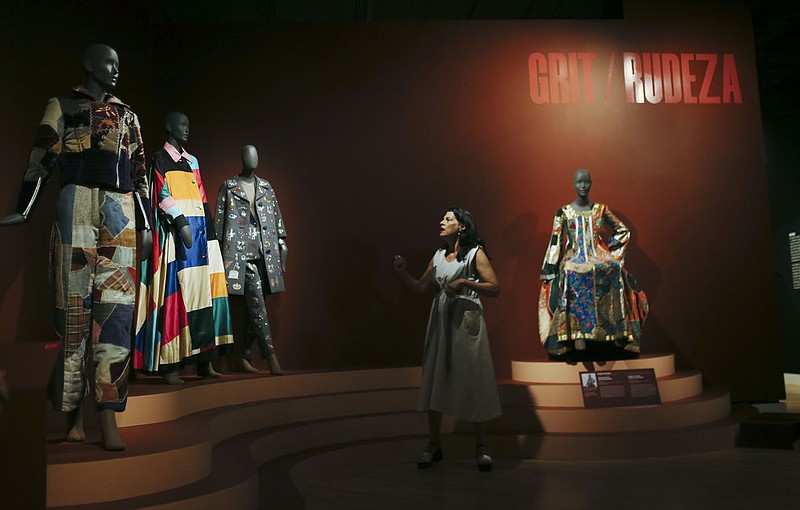 Guest curator Michelle Tolini Finamore wanted an exhibit that featured some of the lesser known names influential to American fashion. She discussed these patchwork dresses Sept. 8 during a media preview at Crystal Bridges Museum of American Art in Bentonville. (NWA Democrat-Gazette/Charlie Kaijo)

If you're under the impression that American fashion trends come only from Los Angeles and New York, Michelle Tolini Finamore is out to change your mind with "Fashioning America: Grit to Glamour," the first exhibit dedicated to fashion at Crystal Bridges Museum of American Art.

The exhibit gives a sense of American fashion history through some recognizable names -- Ralph Lauren, Nike, Vera Wang, Levi-Strauss -- but more so through "little-known fashion heroes" and designers who didn't get much recognition the first time around, including the work of many Black and Indigenous designers.

"Fashioning America" opened to the public on Sept. 10 and will be on display through Jan. 30.

"The goal was to include and think about the stories we haven't told," says curator Finamore, who worked on collecting items and creating the exhibit for the past two years. "We wanted to draw out and tease out some of those stories about why certain designers have histories that are recorded and some don't, which often has to do with the color of your skin."

So while visitors see names that they'll be familiar with if they're interested in the fashion world, like mid-century designer Claire McCardell, known for ready-to-wear clothing and credited with creating American sportswear, they'll also see many Native American designer names for the first time, names that don't appear in most accounts of fashion history. Many of the items displayed from Indigenous designers are more contemporary in nature, Finamore says, because the designers haven't participated in the American fashion world on the same scale as other designers.

One example of a Black designer now getting a chance for her work to shine on display is Phoebe, who was based in Charleston, S.C. The dress she created was likely a 1914 wedding gown that was donated to another museum by a relatively wealthy white woman, but Phoebe's last name and other details about her are not known.

"That's indicative of which history is recorded and which is not," Finamore says. Unearthing fashion treasures like this dress creates an opportunity to research and learn more about their creators.

Black designer Patrick Kelly, who was from the South, was more well known but had to leave the U.S. to find his success. He was the first American to make it into the Federation francaise de la couture, the prestigious governing body of the French ready-to-wear industry.

One piece in "Fashioning America" that calls special attention to the unknown Black history of fashion is a typewriter ensemble. Typewriter keys are sewn on the bodice and small sheets of material that look like typed letters are fastened together into a skirt over a pair of pants. It's by Pyer Moss, who wanted to use the outfit to call attention to the African American inventor who helped create the typewriter. Mas has an entire collection based on unknown Black inventors and has shown this particular piece at the Madam C.J. Walker Estate in upstate New York.

Other designers were chosen for their breaking or otherwise going against industry standards, such as Christian Siriano. He found fame on "Project Runway" as a pioneering voice for diversity in terms of size and body positivity, often dressing celebrities who had trouble finding designers who would do so. His dress for Nicole Byer and some of his items from Rhianna's lingerie line are in the exhibit.

Siriano's works are "about size positivity and inclusivity," Finamore says. "To not have all size 2 mannequins when that's not the reality of the world. That's kind of where you land when a lot of the pieces are runway pieces made for a particular size."

Many items on display come from private collections, such as that of Hamish Boles, Vogue magazine's editor-at-large and editor-in-chief of The World of Interiors, who has been collecting since he was 10 years old. Finamore says she has borrowed pieces from him for every exhibition she has done, since private collections have things that museums do not and often lend an alternative history.

"It's astonishing" what he has, she says. "Mind blowing in many ways."

Several core pieces come from Jimmy Raye's of Salem, Mass., known as one of the best private collections of fashion and vintage accessories.

So much of what's on display is not made of the highest end materials. Instead, Finamore focused on the American tradition of low key fabrics: denim, gingham, cotton and seeing how various people upscaled them and moved them into a different realm in an interesting way.

"Grit and functional, that's what Americans do so well, but designers elevate it into high fashion," Finamore says.

Styles by Carolina Herrera are on display, too. As the wife of the founder of Ebony Magazine, Herrera would organize fashion shows, traveling the country to smaller cities to highlight fashion -- couture, Parisian and American -- in front of a more diverse audience.

"Not everybody could attend high fashion shows, that's not the way most people operate," Finamore says. "But (designer) Patrick Kelly attended one of those shows, and it was transformative for him, a Black boy from the South."

Among the oldest dresses on display is what Finamore calls a "spectacular" custom-made gown -- black covered in multi-floral pass manger (similar to trim that has material balls like you might see on curtain edges), made in the 1860s by Madame Olympe Boisse. While the father of couture touted himself as the first to sign his garments, French-born Mme. Olympe was actually signing her gowns in New Orleans in the 1860s.

The "Fashioning America" exhibit has seven sections, walking viewers through historic pieces, American fashion trends and disruptions to those trends. The introductory section includes a Nudie suit, named after Nudie Cohn, the rodeo tailor. Nudie's spangled, embroidered, sequined suits are beautiful and well constructed, Finamore says, and she set it alongside a designer Fort Lonesome from Austin, a woman-owned work following the tradition of the rhinestone cowboy.

The "Grit" section addresses the history of denim and displays a pair of rare, vintage gold miner Levi's made in America at Amoskeag Mills next to a painting of the same factory that Crystal Bridges already had secured by loan. Also shown is a denim suit from Ginew Jeans, the only Indigenous-owned denim factory.

A "Street Wear" section covers the 1940s to modern times and details how luxury European firms are hiring American designers to bring the street wear vibe to them, starting with the zoot suit. The exhibit wouldn't have been complete without sections for accessories, which includes American creation and creativity in footwear and hats; ready-to wear, which is a strong American contribution to the world of fashion; as well as swimwear and intimates, extending that to Alfred Shaheen's aloha/Hawaiian shirts and many female innovators.

"This is one area where women could participate because it was related to women's bodies," Finamore says. It highlights corset inventor Emmeline Philbrook, who filed patents to make them more comfortable, and other designers like Olga Erteszek, a Polish immigrant with an underwear empire.

If seeing all the unique clothes gives you the itch for trying something on, be sure to stop at the first-ever interactive digital garment to be displayed in a museum exhibition. The experience is a collaboration with bionic pop artist and futurist Viktoria Modesta. Using your movements, you can help her avatar try on a few outfits.

And finally, before you leave, take a walk through glamour on the red carpet, the true American invention.

"Hollywood and media are a through line throughout the show," Finamore says. "The music industry and how all of that profoundly impacted the transmission of American ideas across the globe." 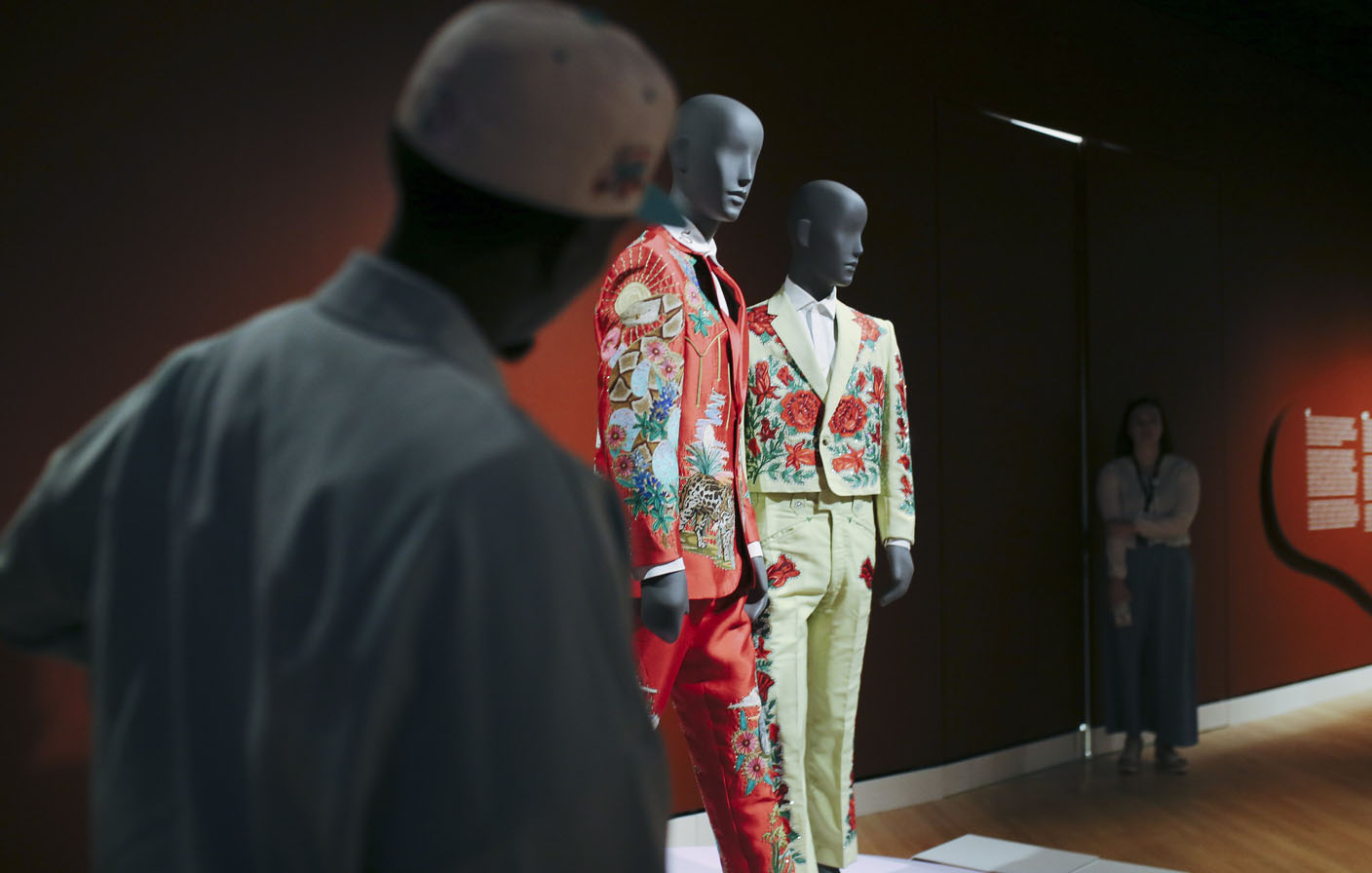 In the introductory section of "Fashioning America: Grit to Glamour," Crystal Bridges’ first exhibition dedicated to fashion, are pieces that show general American fashion traditions, as well as some disruptions of it. This custom chain stitched western “Texas” suit (center) and a rhinestone “nudie” suit are examples of the rhinestone cowboy look that originated with Nudie Cohn, the rodeo tailor. (NWA Democrat-Gazette/Charlie Kaijo) 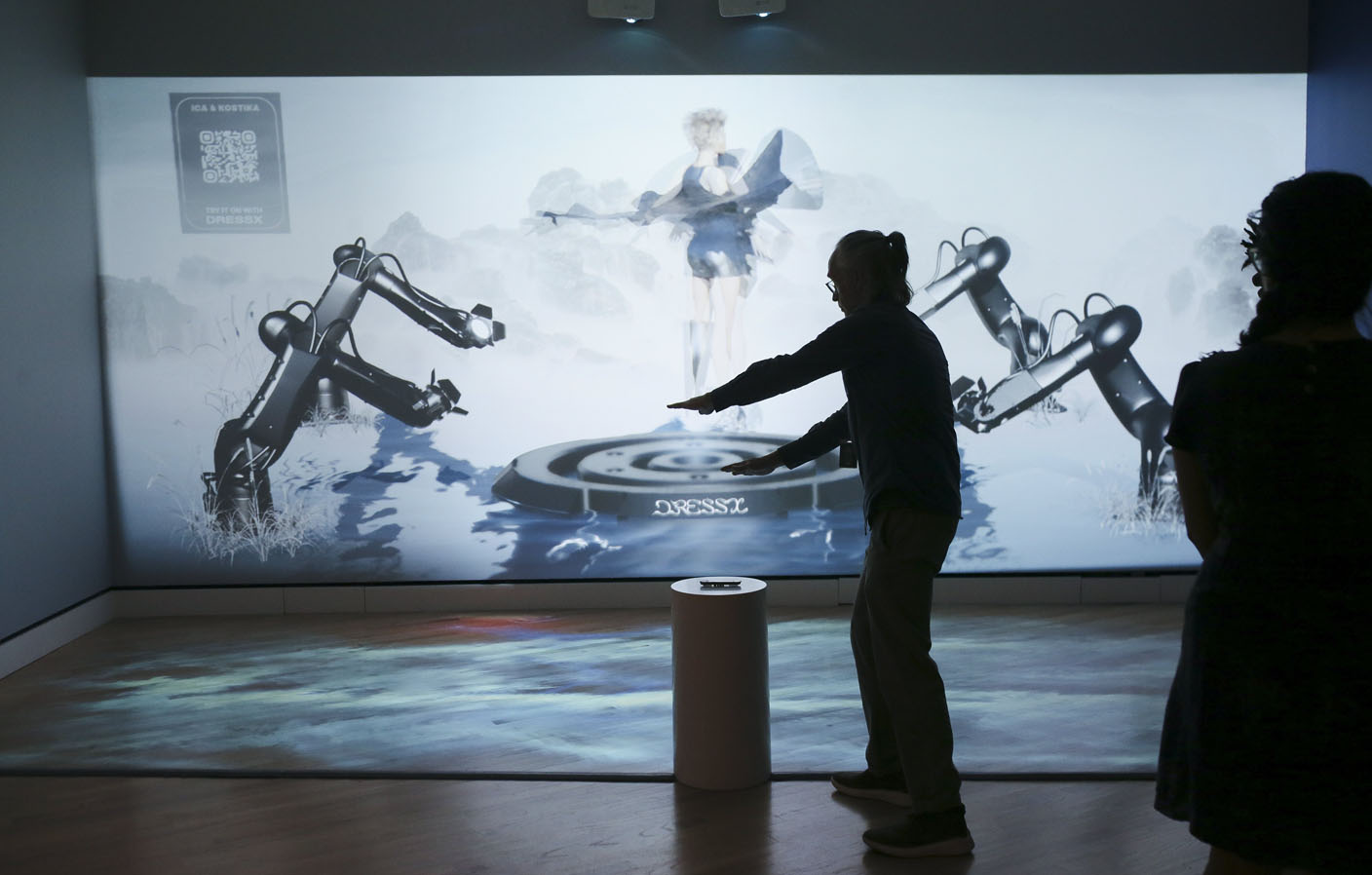 If seeing all the unique clothes gives you the itch to try something on, be sure to stop at the first-ever interactive digital garment to be displayed in a museum exhibition. The experience is a collaboration with bionic pop artist and futurist Viktoria Modesta. Using your movements, you can help her avatar try on a few outfits. (NWA Democrat-Gazette/Charlie Kaijo) 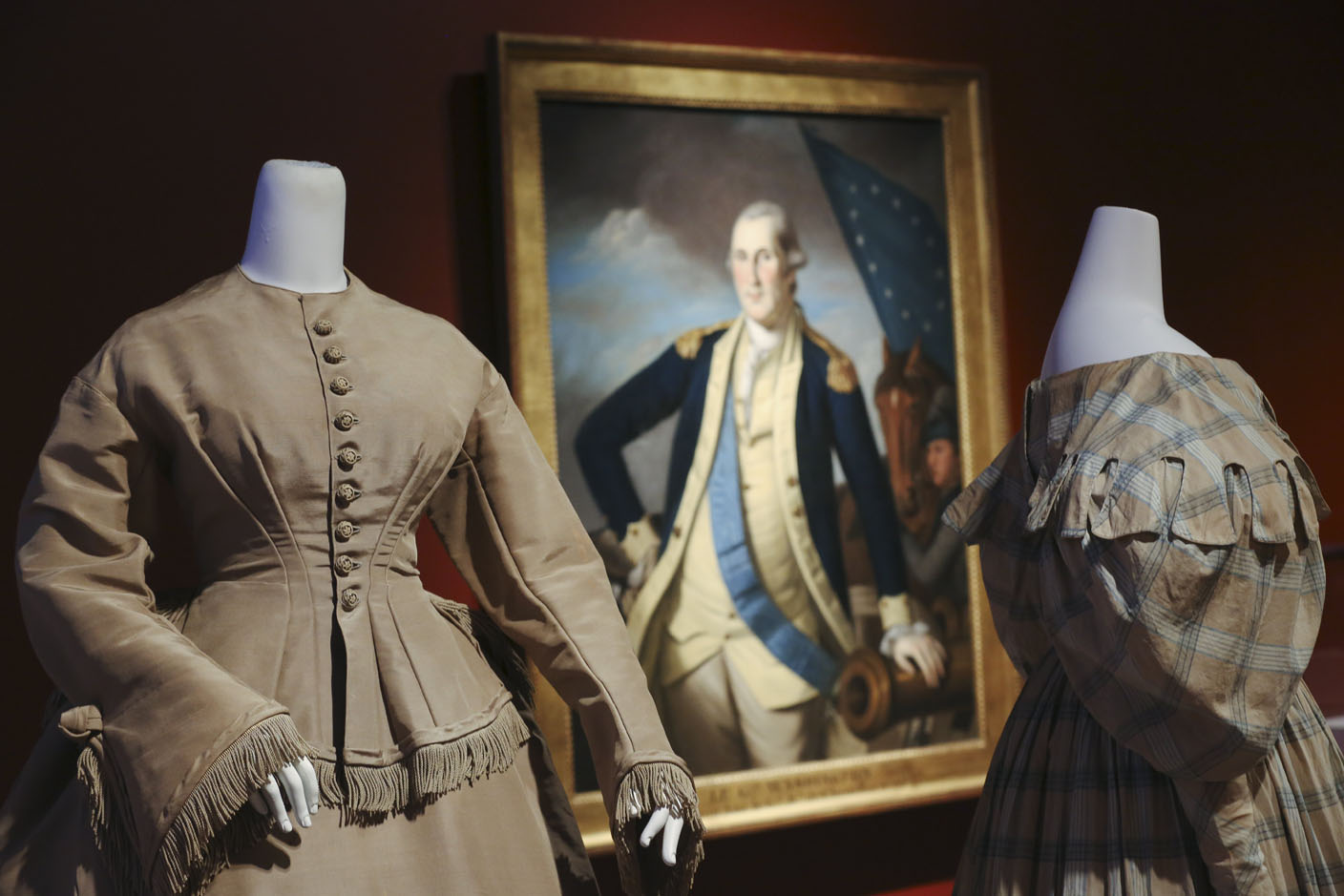 George Washington makes an appearance in "Fashioning America: Grit to Glamour," between these 19th century dresses. President Washington often wore only clothing made with American fabrics, and Alexander Hamilton came up with a detailed plan for how to produce all-American clothing in that era. The challenge at the time included finding enough workers for the prospect. (NWA Democrat-Gazette/Charlie Kaijo) 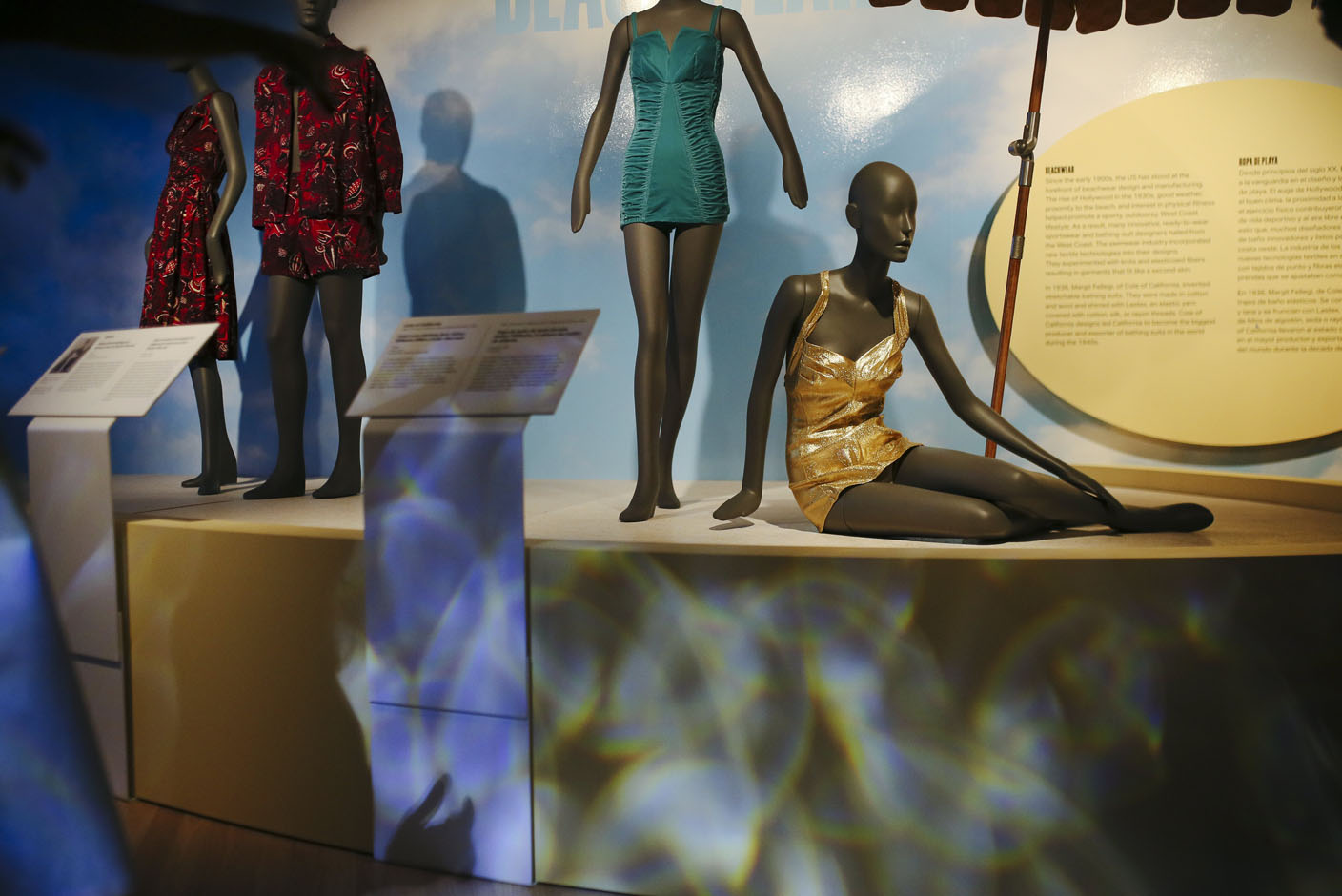 Swimwear and intimates are a part of the ready-to-wear movement, which is something that curator Michelle Finamore says that America does particularly well. This 1950s gold lame bathing suit is displayed in the swimwear section of "Fashioning America," on a stage that mimics being poolside, next to a running loop of video from the same era. (NWA Democrat-Gazette/Charlie Kaijo) 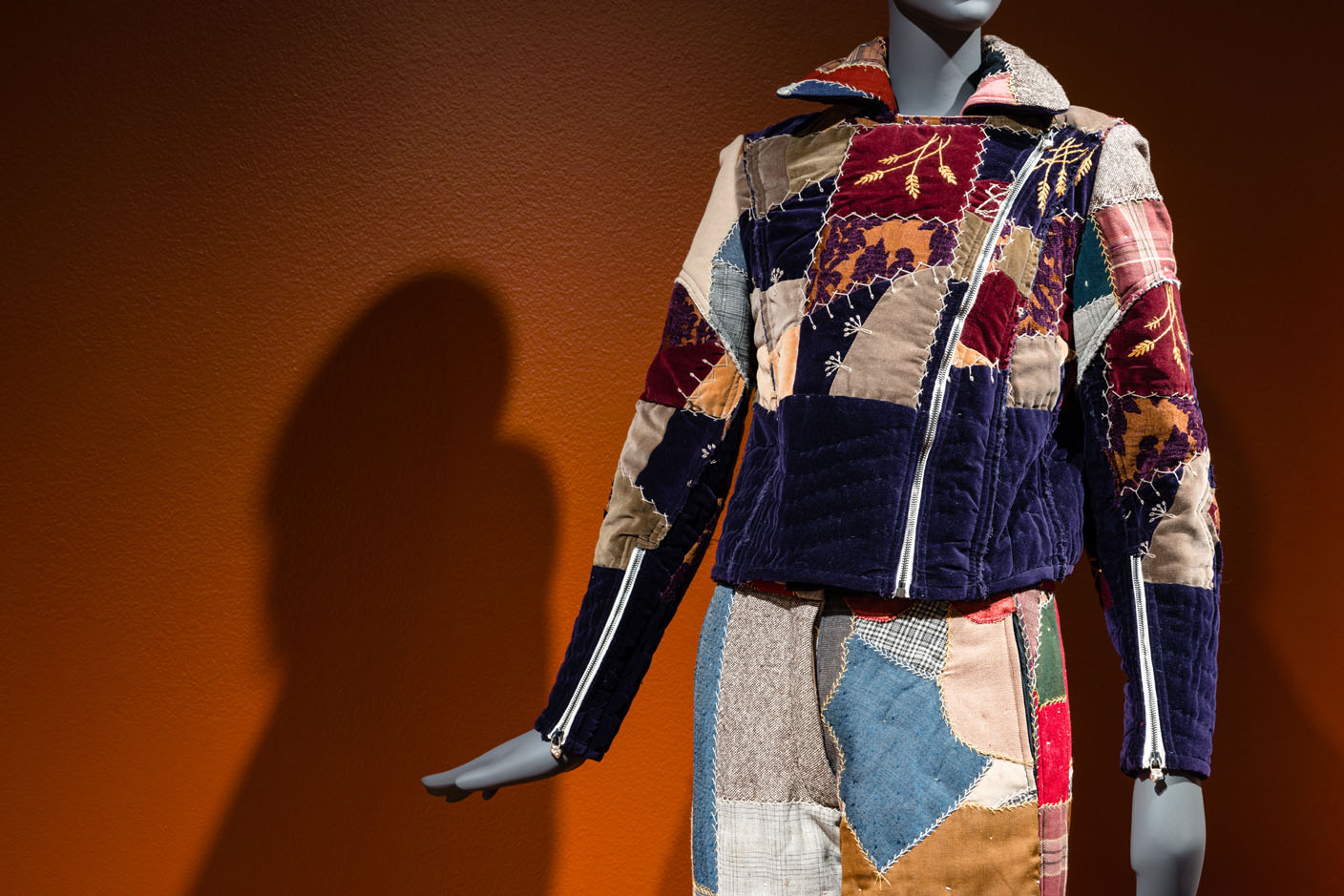 COST — $12 for adults, free for members, SNAP participants, veterans and youth 18 and under