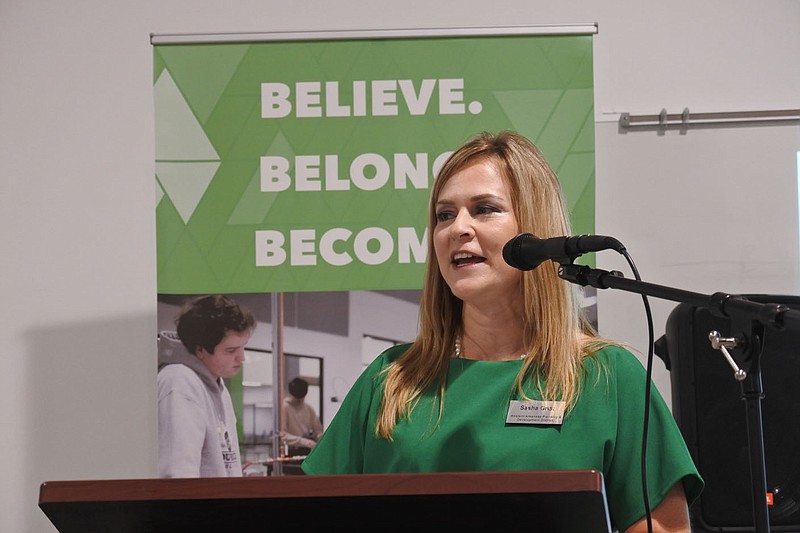 Sasha Grist, executive director of the Western Arkansas Planning and Development District, speaks Wednesday during a meeting of the district’s Board of Directors at the Peak Innovation Center in Fort Smith. (NWA Democrat-Gazette/Thomas Saccente)

FORT SMITH -- The Western Arkansas Planning and Development District has set its sights on relocating its office, with the Chaffee Crossing area being a strong possibility.

Sasha Grist, district executive director, told the district's Board of Directors on Wednesday that the sites its Building Committee looked at last month in Chaffee Crossing are feasible for a new office building.

Grist believes the next step will be for the committee to discuss these options with Fort Smith-based MAHG Architecture. Grist will also meet with real estate agencies next week to ensure there aren't any other sites the committee missed in Fort Smith.

"I'm assuming maybe the second week of October we get the Building Committee together again and then be able to give you more information in December of what we're looking at," Grist told the board.

Grist has said the district's office at 1109 S. 16th St. in Fort Smith was built in 1979 before the district moved in in 1991. She said despite an addition to the building in 2012, the district has insufficient space to be able to carry out the services and hire the staff it needs, having "outgrown" the property.

Daniel Rogers, the mayor of Paris and chairman of the Board of Directors, said he believes a new office building will allow the district to do more for the counties and cities in its service area. This has included bringing in millions of dollars for these communities by helping them apply for federal and state grants.

"I think Sasha, with her leadership, will get a building plan together that is good for today, but also will be big enough that they know that they can grow this group to take care of the needs of us cities and counties in the district," Rogers said.

The board approved establishing the Building Committee on June 14 to discuss options with Grist to address needs for the office property and recommendations for the board to consider. Along with Rogers, the committee consists of Gary Baxter and Doug Kinslow, the mayors of Mulberry and Greenwood respectively, as well as appointed district board members Gary Briley of Franklin County, Julie Murray of Crawford County and Alex Sanchez of Fort Smith.

Grist said the Building Committee went to Chaffee Crossing, located in Fort Smith and Barling, on Aug. 22. Daniel Mann, executive director and CEO of the Fort Chaffee Redevelopment Authority, which oversees the development of the area, provided an overview of some of the available properties. This included existing buildings and land options that were either privately owned or owned by the authority.

The committee's consensus was to look at constructing a new office building if possible, according to Grist.

Rogers said the committee believed a space that's set up specifically to the district's preferences for now and into the future would fit the district better than an existing location.

"Love the location as well of the Chaffee Crossing area," Rogers said. "Think that's going to be really central to a lot of the district."

Grist said the district's "wish list" for an office property includes a room large enough to hold meetings, something the current office doesn't have.

"That was really the main thing that we were looking at, as well as the ability to have enough parking and to build on later if we needed to," Grist said.

Grist said MAHG Architecture told her Tuesday the district would need to purchase 2 1/2 to 3 acres of land to build an office space that would satisfy its wish list. The authority would like for the new office building to be finished within three years of the district purchasing land in Chaffee Crossing, should it decide to do so.

The district Board of Directors will have its next meeting Dec. 14.

The Western Arkansas Planning and Development District is an organization that provides information, support and services concerning a variety of fields to those in Crawford, Franklin, Logan, Polk, Scott and Sebastian counties. This includes community and economic development, workforce development, transportation improvement, 911 emergency services and geographic information system/utility mapping.